Lebron to Brooklyn; No Sh*t

Monday afternoon while in New York City's Rockefeller Center doing publicity for the United States men's Olympic basketball team, Lebron James had this to say about the city that never sleeps:

"My favorite borough? Brooklyn. Brooklyn is definitely a great place here in New York City, and some of my best friends are from Brooklyn, so I stick up for them."

This is news? The basketball phenom is from Akron, Ohio and no disrespect to Akron but New York City boasts a population of over 8 million people. That is 8 million people to buy your jersey, tickets, and sneakers. About 7,500,000 more opportunities for King James in NYC than in Cleveland.

It isn't just New York City that is luring Lebron, specifically it's the soon to be Nets of Brooklyn. Spike Lee and the Knicks fans who are living in denial let me break it down for you. NO WAY WILL LEBRON BE WEARING ORANGE & BLUE, NOT IN 2010, NOT EVER and here's why:

1. Danilo Gallinari Sure the Italian rookie looks good in those you tube clips of him, but hasn't Lebron been there before? Anderson Varejao, Aleksander Pavlovic, Zydrunas Ilgauskas, the list goes on and on. I get it, these teams are looking for the next Dirk, the next league MVP, and more importantly, the next

RUNNER-UP in the NBA Finals. Lebron has been that runner-up and has proven that he could take a team on his own, what he doesn't need is another stereotypical European big-man with "tons of upside." The Knicks own GM Donnie Walsh even states that he has never seen the Italian born star in person, yet he has worked him out. Cone dribbling, suicides, and one-on-one vs. air, that's worth a lottery pick, right? Before Lebron becomes the next Kevin Garnett (12 years in the can before a title) you've gotta get him someone whose A. not a European stereotype B. a legit scorer and C. not Delonte West.

2. While the Nets are dumping contracts (J.Kidd at $19 Mil and Richard Jefferson at $12 Mil) the Knickerbockers are on the hook for Zach

Randolph's $13 million and Stephon Marbury's $19 million. Aside from major dollars dedicated to Vince Carter, the Nets are aligning themselves perfectly with the summer of 2010 (when Lebron becomes available to the highest bidding borough). With Carter and 28-year old small forward, Bobby Simmons, being the only two on the roster to make more than six million a year the Nets will have plenty of room to take on Lebron's ego oops I mean salary (slip of the tongue). As for the current residents of MSG, Quentin Richardson, Malik Rose, Randolph & Marbury, Jamal Crawford, Eddie Curry, and at least two former harassed employees are making over that six million a year mark. A business model the fellas at Enron would be proud of.

3. What Mr. Stern wants, Mr. Stern gets. Gone are the days where David wanted New York Knicks to be relevant, see Patrick Ewing draft. Last summer when the NBA wanted nothing more than to be OUT OF THE HEADLINES, following the Tim 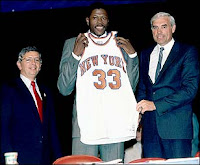 Donaghy scandal (if you were asleep, he was fixing games as a ref) there was one team who couldn't get away from bad press, the New York Knicks. Former Madison Square Garden employees were filing suit with the Knicks and accusing them of sexual harassment, that's what Stern was looking for. The Vito Corleone of the NBA doesn't exactly let things go, and what better way than to take a shot at the Knicks but to secure Lebron to the cross borough rival. Stern wanted a Lakers v. Celtics Finals, CHECK.

I'm all for Lebron to the Nets or Knicks, what better way to root against Lebron than while he's playing for a New York franchise. I only have one piece of advice for the all-world baller; stay off the microphone, I can't handle another rap performance like Shaq's.
Posted by Lynchy at Tuesday, July 01, 2008