What is so bad about Carmelo?

Before the 2003 NBA Draft all the hype was surrounding the young Ohio high school phenom, Lebron James. The top pick in that draft, James has become an instant success. From his multi-million dollar endorsements to his appearance in last years NBA Finals, Lebron is set to embark on a long profitable career in the NBA. The King will most likely move from his current home in Cleveland to a more financially viable city like say, New York. At that point we will see his ego go from huge to f*cking huge and include at least one or two championship runs.

The number five selection, Dwayne Wade from Marquette, is currently the poster boy of the NBA. Wade gave expert analysis for ESPN during the 2008 Finals and oh yea, he was the MVP of the 2006 NBA Finals. Wade is just in his fifth season as a pro and has already been to the top of the mountain and won. Dwayne is the cornerstone of the Miami Heat and is featured in commercials for T-Mobile and Gatorade to name a few. When healthy, Dwayne Wade is one of the top 5 players in the world.

After being passed over by the Detroit Pistons for none other than the historically awful Darko Milicic (from parts unknown) Carmelo Anthony is selected by the Denver Nuggets. For Carmelo, who was fresh off leading Syracuse to a national

championship in just his freshman year, Denver seemed like a good fit. The Denver Post (as mentioned in other rants and tyraids of LynchyRightNow.com) doesn't exactly rip athletes as much as say an New York or L.A. newspaper, yet they have their moments. Carmelo would be playing against the best of the Western Conference every night. A proven scorer in the league, Anthony was even handed future hall of famer, Allen Iverson, last year to enhance his game. More than Wade, who was placed along side a lazy declining big man, and Lebron whose team decided that adding Ben Wallace, the games worst offensive player, was a viable second option. So why hasn't Carmelo won?

While Anthony hasn't been as glorified as Lebron & Dwayne, his play hasn't suffered. Melo (as the kids refer to him by) has averaged 20+ points and 5+ rebounds in each of his first five seasons, including his 2006 campaign where he dropped nearly 30 a night. Carmelo was the fourth leading scorer per game in the NBA in 2008

, while being paired with the third leading scorer in Allen Iverson. Only Iverson, Kobe Bryant, and Lebron James scored more points nightly. Lebron and Kobe are also the only players to have more field goals made than Melo yet he has a better average of made against missed than both of them. Anthony clearly can get to the rack ranking in the top ten in free throws attempted as well. Watching Carmelo play in pre-Olympic competition it was obvious that he is the most diverse player of the three, see Carmelo's domination against Italy and Puerto Rico last summer. If you don't buy that, watch when all three are playing in China this summer.

Despite Carmelo's on the court game being outstanding, his off the court game leaves little to be desired. The New York native was arrested on suspicion of driving under the influence earlier in the Spring. This came on the heels of Melo's criticism of 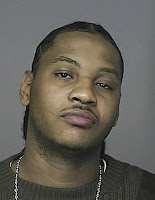 George Karl and the Nuggets of how his game was being handled. Since the season ended and Melo's Nuggets were ran out of the playoffs by Kobe and the Lakers, rumours of the superstar being traded have been swirling. From Melo actually ending up on the Pistons to the Nuggets coming out and saying they have no interest in trading him, his future doesnt' seem certain. I cant' get a clear read on wether or not Melo wants out of Denver, he is getting paid, playing well, and making the playoffs but unlike Wade and James it doesn't seem like a Championship is in his sights just yet.

As I touched on earlier I think that the Summer of 2008 will be a touchdown moment in Melo's career. Back with a college coach, in Team USA's Mike Krzyzewski and on a

national stage, the Olympics, for the first time since the National Championship run of his Syracuse team, Melo is primed. The best cure for a tumultuous season and off season is time away from the everything but basketball. Averaging 21 points, a team high, during last years competitions in World play, Anthony excelled as an offensive threat. I think Carmelo is the type of player who needs coaching from figures like Jim Boeheim and Coach K, rather than the George Karl's of the world whose success has clouded their ability to teach players as oppose to telling players what to do.

Carmelo is a rare talent, if the Nugs were to trade the guy it would be way to difficult to get equal talent. Like Shaq to the Heat, Garnett to the Celtics, and Rasheed to the Pistons, these deals don't always work out when you don't get the best player in the trade. So I ask, What is so bad about Carmelo?
Posted by Lynchy at Thursday, June 26, 2008