Before I get to the NBA Finals, I've been inspired by my recent obsession with HBO's original series, The Wire, to release the wire tap transcript on David Stern's phone line. If your new to the site, or you've just been in a coma, David Stern is the NBA's Commissioner and the following conversation picked up on The Wire, was with NHL Commissioner Gary Bettman, Enjoy:

David Stern, Commissioner of the NBA: "Gary, we caught lighting in a bottle here with Celtics v. Lakers, the cup finals have been cute but could you finish this off before we embarrass your ratings?"

Gary Bettman, Commissioner of the NHL: "Sure thing, Red Wings in 6"

David Stern: "So Crosby winning the cup wouldn't have been a good thing for the NHL? Hey, your the boss right?"

Gary Bettman: "Sh*t, I didn't think of that"

That may have been way more fun for me than it was for you, I say that alot, unfortunately. The long anticipated NBA Finals Preview is being brought to you by Cialis (have to pay the bills);

Before I went to bed Thursday night I dreamed of a Celtics v. Lakers NBA Finals, as sad as that seems, at least my dreams have come true. I openly admit I'm from New England and I want an early summer parade through the streets of Boston with the fans wearing nothing but Celtics painters hats and green t-shirts, circa 1986. I want nothing more than to see Kobe fail in his first attempt in the finals, post Shaq. With that said the Los Angeles Lakers pose a very big threat to those things listed above never actually happening.

The Zen Master, Phil Jackson, is on the verge of his 10th championship season as a head coach. I'm not sure even Phil could have predicted he'd win 3 to 5 more rings after he and Michael parted ways. As a friend of mine accurately corrected me, this hasn't been Jackson's best coaching job, but it's close. Reigning in Kobe Bryant after his tumultuous summer, completely changing the dynamic of the team after the injury to Andrew Bynum, and crushing the defending champion Spurs in five games, 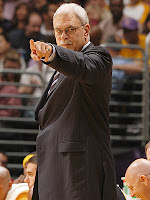 makes a pretty good 2008 resume. You aren't going to find anyone, who watches the NBA with any regularity, that will tell you that Doc Rivers has the upper hand in this coaching match up. While Doc does have the most dominating defensive team in the NBA, his inconsistent rotations are a clear sign that he is questioning his decisions game by game, something Jackson rarely does. Having Kobe Bryant helps, but Jackson having the trust of his entire team gives the Lakers a coaching edge. Ray Allen questioning Doc's offensive game plan, Pierce questioning Doc giving Rondo the ball at the end of the half, and watching Sam Cassell completely butcher the game plan in three minutes makes you wonder how much trust they have in Doc's decisions. You don't question the game plan or decisions of a 10-time NBA Champion.

While we appreciate the lock down defense the Celtics played on Lebron James, he was passing off to Delonte West, not Derek Fisher. If the Celts can defend Kobe half as well as they defended Lebron, Derek Fisher will play a huge roll in the NBA Finals. Fisher hits that knock down three-pointer, EVERY TIME, and the duo of Rajon Rondo & Ray Allen will have to be able to defend him well. The play of Derek Fisher is vastly underrated, on a team with Kobe Bryant everyone is underrated at times. Fisher has been an NBA Champion for some time now and has that calm under pressure game that stars like Chauncey Billups and Tony Parker have as a point guard. Unlike guards Mike Bibby & Delonte West, Fisher isn't as flawed as Rondo has appeared at times during the 2008 playoffs. His career is similar to the career of former Bulls guard Ron Harper, a guard who was never "THE GUY" but plays that roll of getting the ball to "THE GUY" as well as anyone. The court leadership and ability to rely on him in pressure situations makes him just as big of a threat as Kobe, Lamar, and Pau. The Celtics cannot fall in love with only defending Kobe in this series.

Not since his days at URI (New England shout out) has Lamar Odom played as well as he has since the arrival of Pau Gasol. Odom becoming the third scoring option on a champion contender was the best thing for him. Playing in that Tony Kukoc (I loved the Jordan years, Sorry) role has allowed him to become more of a slasher and play the natural power forward position he plays. Averaging 14 points and 10 boards on the season Lamar rounds out the Lakers, if you don't believe me look at his production since January, it's gone up every month. Odom as well as Fisher plays a critical role in this series. Depending on who he plays on defense whether it is

Perkins or Garnett, he'll be placed in the position of stopping or slowing down,their dominate inside presence which they displayed against the Pistons. It was Odom's 18 ppg and nearly 12 boards against Utah that carried the Lakers into the Western Conference Finals.

There are few guarantees in life, taxes being one, death being two, and Kobe Bryant playing well on the NBA's biggest stage being the last. You can bet your ass that Kobe will drop 20-40 a night against the Celtics, they know, you know it, and he knows it. Not since Michael Jordan has a player been able to score at will like Kobe can. It isn't just Kobe's offense which is a threat he plays great on the ball defense and is a superb passer. Much like Lebron, Kobe can create his own shot which proves to be very difficult to defend. Ray Allen having covered Kobe in the past, and Paul Pierce will have their hands full, using James Posey and even Tony Allen off the bench to defend Bryant will be a challenge. If Kobe wins his 4th Championship he is more than IN the conversation for top 10 of all time, as current best player on the planet goes, Kobe is it.

I'm so eager with anticipation I can barely hide it. I currently have ignored nearly everyone I'm working with today because I'm in the zone. The thought of Sam Cassell being the anti-back up guard, Rajon Rondo turning the ball over 5 times in the stretch, and Kevin Garnett passing off open shots cannot even deter me from being as excited as I am for the opener tonight.

As noted before Rajon Rondo needs to get it under control. The globetrotter like passes to Leon Powe and P.J. Brown under the hoop in transition need to stop. I know it's a good thought and if Allen or Garnett were receiving those I would at least say 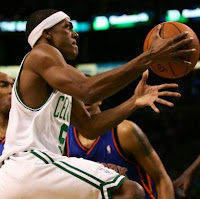 they are going to finish. The problem is Powe and Brown aren't even catching the passes, they are becoming turnovers and killing leads. For three quarters Rondo is playing like an all-star, pushing the ball up the court, splitting defenders and dishing off to the open player, yet in the fourth quarter he is lucky if he advances the ball past half court. If Billups was playing with all is limbs 100% intact, Rondo could have cost them the series in Game 5. Nothing more evident than when Pierce gave Rondo the death stare after Rondo attempted an over the top pass to Pierce who was being double teamed. Being quicker than Derek Fisher is the only thing Rondo has on him, he'll need to use that and common sense in the Finals. I like Rondo to have a huge impact as long as he stays away from trying to make TOO many plays, and his brain stays away from becoming silly puddy in the fourth quarter.

Kendrick Perkins needs to play like Kendrick Perkins played in games 5 & 6 of the Eastern Conference Finals. Other than shaving his chin growth, the best advice I can give to Perk is to play like he's been playing. He won't be seeing any of Jason Maxiell or Antonio McDyess, no Theo Ratliff's, and no Rasheed Wallace's, this should give Perk plenty to work with. The L.A. bigs aren't nearly as physical as Perk and he should be able to gain position. Those once calling for the head of Kendrick Perkins are now praising him, the big man finally GETS HIS ROLE. It only took 82 games and three playoff series' but he gets it. Don't get in foul trouble early and finish strong when you get it down low.

Rivers needs to coach his ass off. Use Eddie House when your at the Garden, don't leave the rotation of Posey, Pierce, P.J., Leon, and Cassell on the floor to long, and STOP CRYING TO THE REFS! The NBA and it's officials love Phil Jackson, they LOVE the L.A. Lakers, getting on the refs gives you no leverage on the road. With the recent play of Ray Allen, it makes Doc's job that much easier. With Allen being able to score and make plays to the hoop Doc can rest Pierce a couple minutes here and there and get him ready for the fourth quarter. I could rant about Doc for twenty minutes but the truth is, there aren't many coaches that could coach this Celtic team much better. My favorite Doc Rivers line is "We are where we thought we'd be" he's right, with 66 regular season wins and a #1 record in the entire league, you SHOULD be in the finals, you deserve to be in the finals.

You know how special Pierce, Bryant, and even KG are going to be in the playoffs, they just are too good to not be. I like the Celtics to steal game 4 on the road after winning two in Boston. The Celtics have faced physically stronger teams and the Lakers just haven't. Despite Boston's struggles against Atlanta and Cleveland, you can't argue they didn't take Lebrons best shot on the chin and move right along.

Detroit with a healthy Billups maybe push the series to seven, but we don't know that for sure. After San Antonio was taken to the brink against New Orleans and their fast paced offense you can't tell me they weren't weak going into the Western Conference Finals. Ginobli was a shell of himself the entire series and he is way more to San Antonio than Billups is to Detroit. The Celtics won 25 games against Western Conference opponents this year, they ripped up Detroit in the Eastern Conference Finals, this team is more than just the Conference Champs. Why aren't' we banking on Kobe reverting back to Kobe of 2006 just a little bit if the Lakers get down by a game or two. The Ghosts of Red prevails . . . Celts in 6.
Posted by Lynchy at Thursday, June 05, 2008

I'm convinced that Bettman is still under contract from the NBA. He is hell bent on running the NHL into the ground.