It first hit me during Kevin Garnett's post game press conference, I'm not sure were aware of what it's like to be a Boston Celtic. I don't know if Michael still roots for the Bulls to win, I doubt Shaquille cares about the Lakers, but between Bill Russell, John Havlicek, and Jo Jo White there's the Boston Celtics and nobody else.

When KG first arrived in Boston it was Paul Pierce who instructed him to embrace the city, because they'll embrace you no matter what. The city that rallied with Pierce in 2002 when he was playing aside Tony Battie and Erik Williams, would rally around

anyone who wore Celtic green. The 'I Remember' commercial put out by the NBA upon Garnett's arrival in title town documented what exactly this gave the city of Boston. What it gave was a thought, a thought that the banner that has so eluded this franchise over the past twenty years might actually become real. Garnett was welcomed with open arms by us, but it was them, the Celtics legends, that you really want to accept you.

The idea seems a bit "frat" like, but it's real. Bill Russell who gave his entire life to this organization, Jo Jo White who attends nearly every game and cheers as if he was on the bench, and of course Tommy, whose calls of the game have become so bias over the years you can't help but notice his loyalty. When Garnett mentioned in his post game remarks that you really feel like a Celtic when these older players embrace you it hit me, they hold every player to a higher standard than anyone else ever could. KG was right, it means something to put on that jersey and play in this city. Pierce has said it a million times "You really want to win a championship in this city, it's like no other."

When you see Havlicek sitting in the stands watching intently or you see Russell embrace Garnett, you know they want this just as bad. I can't help think the "knight-like" figures that they've become is a result of one legend, Red. A man who cared 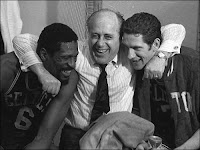 more about winning than anyone else, the pioneer of the game. For the Celtics to allow one Phil Jackson to break Red's record on that court would have been disastrous.

I've got to believe that when you hear Danny Ainge, Doc Rivers, and Paul Pierce say that "Red would have loved this team, that man stuck by me" they feel a bit of relief to know what they accomplished is what he would have wanted most. When the 2008-2009 season kicks off and the Celtics look to defend a title, Paul will be playing with a little less on his shoulders and Doc will be coaching with a little less pressure. Like I said, I'm not sure any of us have a clue as to what it means to be a Celtic.
Posted by Lynchy at Wednesday, June 18, 2008