There has never been any question who is the most talented reciever in the NFL, the question is always who is the best reciever in the NFL. The main reason those two titles haven't been unified since Jerry Rice is because somewhere along the line recievers began to think they actually are the ones who determine wether a team wins or loses. Well just ask 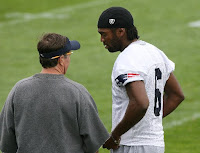 Randy Moss if he can win games all by himself, and I'm sure he'd say you can't, especially when your just the guy who catches the ball. Newsflash to TO & Chad Johnson, you may be very good at what you do, no one denies that, but your boy Randy just got saved out of exile (I'd rather spend a month in Nuremburg than on the Oakland offense)
I watched the San Diego game yesterday and New England absolutely embarrassed them. Not only did that single game put Norv Turner on the hot seat after only two games, one of which he actually won against the defending NFC Champs, which really just means you beat the eventual Super Bowl Losers. But never has it been more evident that one team can flat prepare themselves better than another team can, than it was last night. Back to the main point, Randy Moss makes this team marginally better than they've probably ever been, I can't think when one of the patriot super bowl champion teams had a reciever who demanded double coverage, let alone complimentary recievers that can actually catch the ball and be go-to options when neccessary. Tom Brady looks like a quarterback who can actually relax now and not be so hyped up, he has more time to throw the ball than OJ is going to have in jail. But I can't inslut the Patriots any longer, it doesn't even make sense to, this doesn't mean i'm not going to make every camera-gate reference that I can, doesn't mean that I woudln't hold up a sign saying "Camera or not, here come the Patriots" it also doesn't mean I condone a 3-time head coach of a super bowl winning team wearing a cut up Hoodie on to the field. But I'm not going to say they are overrated, its a stupid thing to say, because they are as advertised, nasty.
Posted by Lynchy at Monday, September 17, 2007