I'm not just about to defend Charlie Weiss because everyone and their mother is piling onto the guy, but I'm defending him because there is a much larger issue as to why the "golden
domers" look absolutely terrible, and that's an understatement. Every newspaper, television sports talk show, and radio sports talk show is making this guy out to be the worst coach in college football because his team has gotten blown out in three straight games, and the offensive genious he is supposed to be, the team has yet to score an offensive touchdown, with a true freshman quarterback, but we ignore that. Yes, his offensive line literally gives Jimmy Clausen all of two seconds to get the ball out of his hands, freshman hold onto the ball too long as it is, but
Weiss should have known this before handing him the keys, and I think 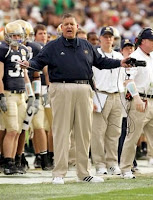 he did anticipate this a little. I don't blame him for doing that because with or without Jimmy Clausen, this team would be 0-3, PERIOD. I've come up with the top three reasons for the lack of success from the Irish:

1. They aren't as talented as other programs at skill positions - You know, I've had this conversation once or twice before . . granted I was probably drunk everytime, but the principal exists, I love tradition, I love the fact that he was a super bowl winning coordinator under possibly the best head coach of all time, and I also love the fact that you play in front of the National Audience every week . . . .but when I was 18, I'd much rather sun, skin, & partying . . . South Bend offers pretty girls who are cold for 5 months of the year that I'm at school = turtlenecks & sweaters, and I don't know about you but So Cal and South Beach well, they definately have those values at 18 I'd like in a program. Notre Dame is great if you want to win the Heisman, but ask Brady Quinn how much you get paid when you are a Heisman front runner your entire career then drop into the late portion of the first round in the draft. Notre Dame can recruit, and I'm sure alot of money goes into their recruiting process, but I just don't think it's as elite as the Notre Dame faithful feel it is, they haven't had a legitimate title team in years, the Gators, Trojans, & Buckeyes all have been consistant contenders over the past decade, all have alot more pull in recruiting, and they draw from the same players as the Irish. If your waiting for the Irish to keep firing coaches until they win a title, your going to be waiting as long as the philly fans have been waiting for the sniff of a trophy, count it 25 years, good luck.

2. NBC - When you are the only team in college football with your own network to nationally televise every game you play, they aren't going to pay you millions of dollars to open the season at home against East Layfette University, your going to play big time teams, and your going to play them early and often:

Then after this week they go on the road at Purdue & UCLA . . . .granted UCLA is the jekyl & hyde of college football, still a tough team to play on the road. Southern Cal is by far a better team, and literally might score 100 points on the Irish (as Steven A pointed out) I mean right now If they had started out playing Duke at home, Stanford on the road, and Navy at home, maybe we are talking about a different team, but that TV deal hurts them during seasons like this one.

3. Brady Quinn - the future starting quarterback for the Cleveland Browns put up god like numbers for an Irish Quarterback, the first since Rick Mirer. He was a heisman trophy candidate, an

extremely hard worker, and was a true competitor, obviously as you lose that field general and have no real quarterback to fill those shoes (THE GUY TRANSFERRED TO NORTHERN ILLINOIS, HE WASN'T THAT GOOD) there is going to be a bit of a let down no matter who steps in, the offense isn't as nsync as they should be at this point, but how good did you anticipate them being? really? You went from having in my mind, the top quarterback in the country to having an untested, young, true freshman quarterback who has just recieved a playbook that is longer than any book he ever read in high school, it'd be like reading Clifford the big red dog your whole life, then someone handing you war & peace . . ITS GOING TO TAKE TIME. Jimmy Clausen is not Brady Quinn, but he does show promise, at least a little bit of promise, he was the TOP quarterback recruit in the world, and Weiss got him, you want quarterbacks, you want field generals, give them time to develop, otherwise your going to have a rotating coaches every three years when you don't win. Just like in high school, without seniors, you dont' win games, thats what this team is going through right now, especially at the QB position.

With that being said, seriously, you can score a touchdown against Michigan State, and I fully expect Notre Dame to be back in the national spotlight with Weiss, at some point over the next ten years, remember he is being paid alot of money for his first head coaching gig. But don't get over excited, because you and I both know you'd rather play for the Gators, and Trojans, over the Irish at least for the time being.