ockets, or that I pull an Oscar De La Hoya like fate and end up in a Las Vegas hotel room dressed up in fishnets with five to seven exotic strippers . . . .which could happen, but I digress. If you recall, the city once known as Clutch City, decided to comprise a team which could knock off the Western Conference and put them back to the top of the mountain. They drafted everyones favorite March Madness star, Bryce Drew (see kids who played for their father in college.com) Arizona Stud, Michael Dickerson, and URI standout not named Lamar Odom, Cuttino Mobley in the second round. But to surround Sir Charles & Hakeem Olajuwon, they also signed 50 greatest player, Scottie Pippen, who had clearly begun the down slope of his career, but was still more than serviceable. Pippen, Sir Charles, and The Dream . . . .three of the games top superstars all on the same floor, they couldn't lose right? Well, they finished that year six games out of first place, in the 3rd slot, then subsequently got smashed like me on a friday night, in the first round 3 games to 1 by the Lakers . . . Title Run, OVER. With that said . . .

I've never been more excited for the start of the NBA season as I am this year, after finally making a conscious decision to surround Paul Pierce with someone other than the McDonald's High School All-American team, i'm finally "into it." Now I won't give all the cr

edit to Danny Ainge for making that decision, if he had won one of the top two NBA lottery picks you'd see a completely different team, but we'll give him some credit for what he's done since that. Not only has he promptly decided that the Celts had no other choice but to do this or suffer the same crappy half-ass seasons we'd come accustomed to, but he did what the Lakers, Suns, & everyone with a brain couldn't do, land THE BIG TICKET. Essentially selecting veteran sharp shooter, and former UCONN star, Ray Allen, by trading their draft pick for someone who'd actually make a difference this year, and not end up in the NBADL (or as I like to call it, the holy shit I made a mistake drafting him league) the Celts began to develop that team that Paul Pierce had wet dreams about for the last three months. But after much rumour about Kobe wanting a trade, and the Suns thinking they were going to get better than having Amare, and 500 trade stories about the Celtics trading everyone and your mom for Garnett, it happened. The Big Ticket put aside that he thinks everyone who lives within a mile of the Fleet is an evil racist, and decided to finally put the Celts back on the national 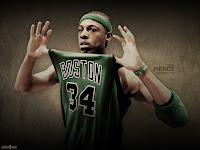 stage. Then I proceeded to dial up everyone I know and subsequently pass out from excitement (and you should have seen my buddy dan, i think he wet himself, no seriously.)
So I've calmed down two months later, I've laughed at Portland fans, because in the immortal words of John Malkovich in Rounders "all your dreams, down zee fackin drain." Then I stopped laughing, because if Garnett gets injured, or Paul Pierce gets stabbed again I'm going to go on a ten state killing spree (sorry this is the year 2007 I can't joke about that) then I laughed at the Lakers still trying to trade Lamar Odom (second Odom refernce) to anyone for a bag of balls. Side Note: do you think GM's just laugh when the Lakers show up on their speed dial? What are you going to trade? FOR REAL? But that was us till we remembered Kevin McHale would trade anything, he just likes being in a trade, I feel about Kevin McHale the same way I feel about T.O. outside of playing the actual sport, I don't want to hear from him.
I will say this though, the team that now wears green in Boston, I truly want to bring home a title, more than any team, in any sport, do I want to see the Celtics win a championship. My football team has won in my lifetime, 3 times (thats the Cowboys, not the Video Cameras (NE Patriots), my baseball team, yes my baseball team The Boston Red Sox has won a championship in my lifetime, and well so have the Celtics but I was too young ( don't have a hockey team, because no one outside of Canada cares about hockey) So I need the Celtics to win a championship, more than I need to make at least 5 to 7 more jokes about Michael Vick, Dog Fighting, and The Rock making another football movie. (Any way Vick can get in his next prison style football movie? it'd fit the bill thas for sure right?)
By all accounts though, in complete seriousness, this team should whipe the floor with the Eastern Conference this year . . . . Then the finals, and anything can happen, my bet is for Steve Nash to break an ankle, Tim Duncan to be suspended for steroid use, and Tim Donaghy to be reffing the finals (while i'm paying him off) . . . GO CELTS!
Posted by Lynchy at Wednesday, September 26, 2007