Turnback the clock b*tches . . .the other night I was watching sportscenter and I'm not sure which pompus ass was the anchor that night but I actually laughed when they pointed out the fact that the Dallas Cowboys, San Francisco 49ers, and Green Bay Packers were all 2-0 . . AND O.J. Simpson is in jail, but where have we seen this before ? ? ? 1993 is the answer.

While all three teams have gotten off to a hot start, they've pretty much been un-tested, so far the guy to your right has not dissappointed, you've got to admire that sort of consistancy, your still in trouble with the law 14 years after you killed someone, oops after you killed two people, a good friend of mine made an excellent point, why would you even leave the house if you got off of a double murder case? Nevermind hang out in a city which goes by the name "sin city." In the hall of fame of absolute idiots, the juice has got to have his own god damn wing by now, right next to Worm in one of my favorite movies, Rounders. Not on the same level, but "you shoulda played those kings Mike" while were on the topic, in the all time classic movie, Blow, George Jung says "I went in with a degree in weed, and left with a doctorate in cocaine" so can I get the over/under on O.J. being Mike Vick's Diego? "i went in with a dog fighting charge, and came out with a doctorate in double murder" but i digress. Anyway, since we know where O.J. is lets discuss, since the nineties, which one of the three franchises San Fran, Dallas, & Green Bay will have the best remainder of this decade:
disclaimer: i'm a hardcore Cowboys fan, but this will be as un-biased as possible.

San Francisco 49ers: All this town has had to cheer about over the last 13 years was Barry Bonds & The Village People reunion, realistically this team is solid, they have a very good ground game anchored by Frank Gore and All-World Offensive Guard, future hall of famer, Larry Allen. The head coach Mike Nolan is a very very good coach, comes from an excellent system, and is among that fraternity of good young coaches like Sean Pay 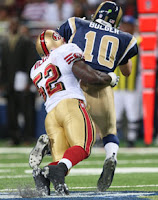 ton & Norv Turner (again that was a joke, Norv Turner is the anti-poon) The defense is key here, like in all contenders for the NFC Championship (because they have no shot against the AFC, that's a fact) rookie Patrick Willis is my pick for defensive ROY, a linebacker than can run across the whole field and after two weeks looks great (second week in a row up for defensive rookie of the week) the former Miss. St. standout has looked fierce in thus far. Not to mention the outstanding play of free agent pick up Nate Clements, who has been as good as advertised for the San Francisco secondary. Now to the former #1 Pick overall, when the 49ers made this pick I didn't like it, I generally don't like quarterbacks who come out of nowhere and are selected in the top 5, it's always a risky pick, for starters if they were really good why weren't they recruited by one of the big schools, USC, Michigan, Notre Dame, and secondly, if you weren't a Heisman front runner its always sort of a gamble in my opinion. But Alex Smith is their quarterback, and we'll have to live wi 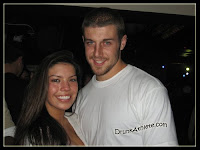 th it. Smith is fairly inconsistant, his passer rating in week one was gross, and last year he threw for as many touchdowns as he did interceptions, then again if you look at the picture to the right, that could be way. (thanks to my friends at drunkathlete.com) it's official, you can make a website out of anything, america's great. I shoudln't throw stones, i looked like that when I came into work this morning, cept i was also rocking the "holy crap how did I get home look" Through last week he has yet to throw an interception, or a touchdown, so that cancels out. Smith has been sacked 7 times which means he's holding onto the ball way to long, if he can stay off the turf, you'll notice the improvement. The bottom line on San Francisco is, they are an injury away from starting Trent Dilfer, he's won a superbowl, granted with one of the 5 defensive teams EVER, don't debate it. But I like him to be this years Jeff Garcia if Smith goes down. Their division sucks, and the next three weeks will be a solid test, @ pittsburgh, then home against seattle & baltimore. P.S. I used to hate the 49ers, but I feel like i'm over that now, I really just hated Steve Young anyway, and still do.
TO THE PACK, Green Bay Packers: loved when they housed the Pats in the Super Bowl (small patriots dig #1) I do feel for Aaron Rodgers because no one is really going to get to see this kid develop, or see if he's actually learned anything playing behind the great Brett Favre for at least another two seasons, including this one. Favre i

s older now in his 16th season, and for sure a first ballot hall of famer (intersting stat, he's the only AP 3-time MVP) but no longer can he himself take over a team, lucky for him, he doesn't have to, helped out by the refs in week 1 and the fact that Philly sucks, they are off to a great start. And handly beat the terrible Giants during week 2, this week they get the Chargers at Lambeau, if there was ever a statement game, this would be it for them, if they smashed the charges, the FIRENORVTURNER.COM sites would already up, a 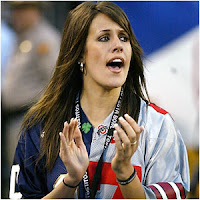 nd I'd agree, except I wouldn't have hired him, because he's had no head coaching success AT ALL (second norv turner dig) But their defense can get filthy, after shutting down Mcnabb in week 1, which at this point doesn't look real difficult, and embarrassing the Giats at home, you start to see their teeth sharpen, Linebacker A.J. Hawk in his second full season is going to have a rediculous year, I love this guy, first of all He's an Ohio State linebacker, goes and marries the sister of Brady Quinn, former Notre Dame QB and current backup to pointguard Derek Anderson (that was a joke) You've gotta give props to a guy who goes to a rival school, takes the QB's sister, that's impressive and she's pretty cute . Veteran cornerback Charles Woodson is an excellent addition to this team last year, and will be a leader on that squad. The bottom line on the Packers this year is, when their defense comes to play, all Favre really has to do is manage the game and stay away from bonehead pics that he likes to throw, They should be good enough to win at least 8 games. 2 down.
America's Team: The Dallas Cowboys
Say what you want about their defense . . .but here's what you need to know, Tank Johnson can help them win, when he's there, the Cowboys do lack the interior defensive line to run Wade Phillips defens 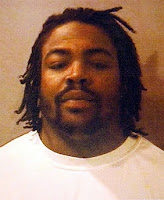 e the correct way, and they are learning an entirely new defensive system, BUT with Terrance Newman back from injury you won't see them get exploited again by Plaxico Burress, that's for sure. For the first time in about 9 years I actually can see their offense playing very well, and not the defense . . Tony Romo looks like he has recovered just fine from his debacle in last year's playoff game, and with Jason Garrett in his ear, hopefully you can see the same things from him, that you saw from Aikman when Garrett was in his ear, as the back up. TO has kept his mouth shut for the most part, and believe it or not The Patriots have had more controversies than he has, that's amazing. I do think they've yet to be challenged and they will be this week when they play Bears on sunday night, you'll find out if their offense is for real, or if they just haven't played a tough defense. I'm not going to praise them, here's the bad things, Roy Williams just looks outmatched in coverages, he can hit, and openfield play with the best of them, but how many times have I seen him play the deep ball soo poorly it costs them six points, Terry Glenn looks like he will be out a while, Unfotunately Wade Phillips is the head coach, and just when they are staying out of the 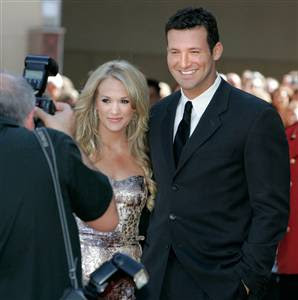 negative headlines, they go and sign Tank Johnson, so when the Pacman gets cut, and ends up on Dallas, were going to be right back to 1993 ala, Nate Newton & Michael Irvin. GREAT . . . . . . Awesome idea Jerry. Tony Romo just got his own ESPN Commercial, which is great, he follows some classic stars to get their own ESPN commercial, The Syracuse Orage got housed by Charlie Steiner, Shaq saves the LSU Tiger out of a Tree . . . Romo is playing a secretary with his QB Wristband . . .sweet, then again if he really is banging Carrie Underwood, then who cares if he throws a million picks . .before i finish i can't help myself, Romo has 6 TD's & a passer rating of 119.3, THANK GOD NO MORE BLEDSOE. I also love the fact that people think they are soft, Its tough to be the underdog and come from behind when people expect you to be the best. . . . god I hope the Patriots lose against the Cowboys, my friends are going to give me so much crap if they get killed (woops thinking outloud) Seriously though, final thought . . . Carrie Underwood is rediculously hot, Tony Romo will be in his 2nd ProBowl, & Dallas will finish at least 10-6 by playing in all of a sudden a crap division.
Decision: Dallas has the least amount of question marks on their team, but I do think that San Francisco is going to be the real surprise, they are very young, and athletic, I like that they went out and spent money on a solid cover corner (no such thing as a shut down corner, besides Deion, I wont' debate this either, because people still throw at Champ Bailey, quarterbacks WOUDLN'T THROW AT DEION, PERIOD , NUFF SAID) Alex Smith hopefully can manage them properly and allow them to win some games.