Averaging nearly 42 points a game and holding opponents to an average of less than 7 points a game, the bayou bengals are off to an explosive 4 - 0 start. Their So. Cal counterparts have opened up with a definitive 3 victories and do not seem to be letting up the number one spot, in all polls, any time soon. So after week four, who is the real #1 ?

LSU: The majority of spectators would say that your number one, until someone knocks you off, but because we won't see the two play each other at all, unless they reach the BCS National Championship, all we have to go by is what we see them do against their opponents. In the case of LSU, the tigers are coming off a victory against #12 South Carolina in which they held a Steve Spurrier offense t

o 16 points, 17 yards on the ground, and forced 3 turnovers. LSU shredded up #9 Virginia Tech in week 2 holding the hokies to only 7 points and putting 48 points up on the board against a defense which is considered a top 10 defense in the country. I'd say the resume is starting to be built pretty solid. The month of October will be especially challenging for the yellow & purple. A preview of the SEC championship is scheduled in Baton Rouge on the sixth, when the defending national champion Florida Gators come into town. UF quarterback Tim Tebow presents problems for opposing defenses, already this year he has 10 touchdowns and only 1 interception, oh yea he's ru

shed for over 350 yards this year already. A week later LSU gets quarterback and heisman hopeful Andre Woodson coming with Kentucky, a team who has shown they can play with the best beating Louisville & Arkansas in back-to-back weeks. The month gets no easier with a road game at Auburn. Final thoughts: with future NFL'ers, defensive end Tyson Jackson, and the SEC leader in interceptions (4) safety Craig Steltz, the LSU defense is nasty enough to shutdown top offenses and will prove that in the coming month. The tigers will continue their SEC dominance playing the majority of their tough games at home, where they have a definitive advantage.
So. Cal: To the men of Troy, led by heisman candidate John David Booty, USC is prepared to be the #1 team in the nation wire-to-wire and continue their dominance in the Pac-10. Southern Cal already answered the bell the two weeks ago in Lincoln against Nebraska blowing the Cornhuskers out of the water. USC will have to navigate their way through the Pac-10, going out of conferance on the road once to give the annual Notre Dame ass-kicking to the Irish in South Bend. A week later they travel to Oregon which will be a true test, the ducks can score touchdo 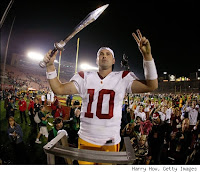 wns with the best of them, and will challenge the Trojans defense. JDB has thrown 9 touchdown passes to only 2 interceptions thus far, with a passer rating over 150 three games into the season, and has asserted himself into NEXT GREAT SC quarterback status (see Matt Leinart & Carlson Palmer) Pete Carroll has got the Trojans rolling right along, junior stud and all-american linebacker Keith Rivers is leading the team with 30 tackles and is a leading candidate for several defensive post-season awards. The Trojans are very fast defensively and can explode on offense, just ask Washington St. how difficult it was to stop the them this week. This program hands down has beeen the most dominatin 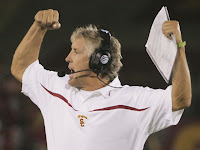 g over the past six years in college football, there is one key factor that goes un-mentioned, in football at any level you need to know how to win games, win the momentum battle and close the door when other teams have that impact play, Pete Carroll's team knows how to do that and when push comes to shove they will step on your throat, start up the fight song.
Final Thought: Booty may not be the best quarterback in the country, but he certaintly is the best quarterback for this team, senior leadership is laced throughout this club. I like them to hold pat and then meet LSU in Nawlins come the end of January . . . . . .

Decision Time: LSU will basically be playing a home game in Nawlins if they get to the National Championship, so like a Rex Grossman key interception . . . LSU will for sure put the Trojans on their back.
Posted by Lynchy at Sunday, September 23, 2007

I'm completely over LSU - they did beat Spurrier but looked like shit doing it. They play basically home games the rest of the way and Auburn sucks so they'll probably run the table but I've seen South Carolina and USC is no South Carolina.