There has been no player in college sports that has been as awe-inspiring as now former Boston College linebacker Mark Herzlich. From the 2008 ACC Defensive Player of the Year to being diagnosed with Ewing's Sarcoma in 2009, then to his triumphant return to the college game this past fall, his journey has been one of legends. On a personal level, watching this guy play the game has been nothing short of fascinating.

However, on a football level - the truth is more than evident: Mark Herzlich could have been literally one of the most dominating players in the NFL, had things not taken an awful turn.

Not many on the national stage understand what watching Herzlich play in 2008 was like. On Chestnut Hill, he was our All-American linebacker who played sideline to sideline better than any player in the country. Herzlich led one of the top defenses in the land, black paint covering his face, he intimidated 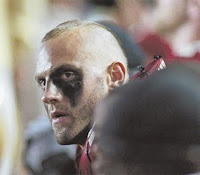 ACC offenses up and down the Eastern seaboard. It wasn't just all that, it was how hard he played the game and how great he was at the same time. Loose ball, he was on it. Tipped pass, it was him. Tackle for a loss, Herzlich. When the Seattle Seahawks selected comparative Wake Forest linebacker Aaron Curry 4th overall in 2008, I was sold - not only was Herzlich going to be the 3rd consecutive player from Boston College to be selected in the top ten, he'd no doubt be an instant hit! Atlanta Falcons quarterback Matt Ryan [3rd in 2008], Green Bay Packers defensive tackle B.J. Raji [9th in 2009], next was supposed to be Herzlich. At 6'4", 238 lbs., Mark Herzlich was simply the most impressive defensive player in the country headed into his senior season on Chestnut Hill.

Then in the Spring of 2009, it all came to a very abrupt halt. With a tumor in his left femur, diagnosed with a rare form of cancer, Ewing's Sarcoma, football was appropriately pushed to the back burner. A For Herzlich, it without a doubt had to be a crushing blow. Put aside the promising football career at the highest level, his life

was at risk. However, despite what he had to be thinking in private, Herzlich never seemed to lack confidence in his recovery. After doctors told him he'd most likely not return to the field, Herzlich responded:

"Obviously, I'm not going to play this year because of the chemo. But I'm going to spend a lot more time in the film room and will do more mental learning. I really want to come back next year and pick up where I left off."

Mark Herzlich spent the 2009 college football season on the sidelines cheering on his teammates and being an inspiration to everyone watching him recover. As Boston College fans dawned gold t-shirts encouraging everyone to "Beat Cancer" with Herzlich's signature face paint on the front of them, Herzlich became a hero for his toughness and courage. In early October of 2009, Herzlich announced to everyone that his body was 99% cancer-free, and the return to the field he spoke so strongly of, would actually be possible.

This fall, Mark Herzlich did exactly what he said he would, returned for his senior season just 21 months removed from finding out he had cancer. With a titanium rod inserted in his left leg, face paint and all, Mark Herzlich was back to playing football. I've never been more impressed with any athlete in my life, ever. Herzlich fought as hard to beat cancer in 2009 as he did to win the 2008 ACC Defensive Player of the Year, showing us all exactly what courage was.

Yet as good as the story was watching him play in the 2010 season, I've come to the very honest conclusion: He isn't the same player who took the field in 2008, flat out, and what should I have expected? The guy had cancer! Watching him play opposite All-American teammate linebacker, Luke Kuechly, it was obvious. He was good, but not the player we saw in 2008. He is no longer a top-ten

NFL Draft selection, he may not even be a selection period. As much as we want him to be the same player, the player we loved to watch two years ago, he isn't. He's lost more than a step, and it's that titanium rod in his leg that is to blame, a constant reminder of what the horrible disease took from him. I wrote this for a reason, I want a team to take a flyer on Mark Herzlich, I want this kid to get a shot in the NFL, he deserves it, more than anyone else.

I'll end with this, Mark Herzlich may never disrupt an NFL backfield as we thought he surely would, yet what Mark has done over the past two years is bigger than any sack in any professional game could have been. Mark Herzlich has taught thousands of people watching him exactly what it means to be courageous in the face of adversity. Yes, Mark Herzlich actually is a role model and an athlete.
Posted by Lynchy at Sunday, January 30, 2011