After Atlanta(1) and New England(1), two of the best home teams in football, were stunned last weekend in their own buildings, everything opened up. Chicago's defense now looked even nastier. Aaron Rodgers and Green Bay looked and felt like the next Super Bowl champs. Ben Roethlisberger and Pittsburgh now look more and more likely to reach their 3rd Super Bowl in six years. As for the Jets, knocking off Peyton & Tom was just for starters, another Super Bowl winning quarterback looks to be the main course. Tuning up for the Conference Championships later this afternoon, let's go!

Green Bay At Chicago Splitting the season series, these two NFC North rivals are sure play a close one at Soldier Field. The Bears are coming off a convincing win at home against Seattle last weekend. Their defense looks as sharp as they have for most of the season. You know the usual suspects, Peppers, Urlacher, Briggs, and Tillman lead that

hard-hitting Bears defense. For the Packers, they couldn't be higher. Blowing up the Falcons last weekend, both Aaron Rodgers and the Packer defense looked very, very, Super Bowl ready. However, in the two games against Chicago this season, Rodgers has been sacked twice while throwing two interceptions. If Green Bay cannot run the football at all, making them a one dimensional offense, that Packer line better be ready to protect Rodgers against an 'ears pinned back' Julius Peppers Bears led defensive line. The Packers may win a close-low scoring game but I don't buy giving the home-team points in a Conference Championship game. Bears +3.5

New York (Jets) At Pittsburgh Ben Roethlisberger is eight quarters away from becoming a 3x Super Bowl winning signal caller. The Steelers quarterback knows how to win and is one of the best in the league at extending plays. If their young core of receivers, Antonio Brown, Mike Wallace, and Emmanuel Sanders play like they did against Baltimore, Roethlisberger and the Steelers will 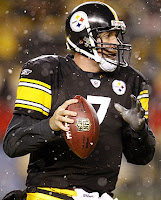 be headed to North Texas. Then there is the Jets, they attack offensive lines and really get after quarterbacks. The Jets are playing it one way, keep the game close, play tight defense, be in the game in the closing minutes, and it's gotten them this far. Rex Ryan's defense will have to be able to stop the run, in particular Steeler running back Rashard Mendenhall - a 1,200 yard, 13 touchdowns rusher. The 'x-factor', as cliche as it sounds, is Jets quarterback Mark Sanchez. In New England last week, Sanchez played interception free, completed 16 of 25 passes, and threw three touchdown passes, exactly what the Jets needed from him. I like the the Steelers to pull this one out late, they've got that championship pedigree, but the Jets keep it close. Jets +4

For all of you reading at home, the Packers & Steelers are headed to North Texas but with all four of these teams being virtually equal - expect games seperated by a field goal or less. . .

Want more Lynchy? Follow us on Twitter @LynchyRightNow on The RightNow Podcast.
Posted by Lynchy at Sunday, January 23, 2011