With 'The League' wrapping up this past Sunday, we wanted to cast our ballots for all the regular season awards. With the New England flavor spread throughout the last eight weeks of the season, the postseason awards will be no different.

Coach Of The Year: Bill Belichick. The Patriot head coach wrapped up his fourth 14-win season on Sunday putting him in a league of his own. Even more impressive is his ability to coach up a very young defense and four weeks into the season trade away a talent like Randy Moss without missing a beat. No debate, Belichick did a tremendous on-the-field job in 2010.

General Manager(s) Of The Year: Nick Caserio, Bill Belichick, and Floyd Reese. The Patriot brass hit homeruns with 1st-round selection now Pro-Bowl defensive back Devin McCourty and 2nd-round selection tight end Rob Gronkowski. Didn't flinch at trading Randy Moss. Hit a solid-double with Danny Woodhead after the season-ending injury to Kevin Faulk. I marvel at what the Patriots front office has put together this season.

Offensive Rookie Of The Year: Quarterback Sam Bradford. He's one of six quarterbacks to take every snap under center this season, and he's a rookie. Bradford has transformed a team which won one game a

season ago into a team competing for division championships and playoff spots. The former Heisman Trophy winner lost both Donnie Avery and Mark Clayton, two of his top receivers, and still had a great year.

Defensive Rookie Of The Year: Ndamukong Suh, the Lions 1st round selection (2nd pick overall) proved to be worth every bit of hype he was drafted with. Recording 10 sacks in his rookie season, Ndamukong Suh became the focal point of the Lions defense. The 23-year old rookie put his speed and power on display every week and closed out the season with a five tackle, one sack, and a forced fumble performance against division rival Minnesota.

Offensive Player Of The Year: Falcon receiver Roddy White was selected to his third straight Pro Bowl this week (1st as a starter) and it was well deserved. Roddy White was huge reason why the NFC #1 seed Falcons earned home field advantage by going 13-3 in the regular season. White caught more receptions (109) than any receiver in the league, finished 2nd in 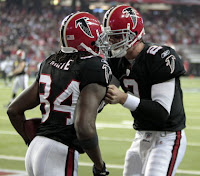 receiving yards, while hauling in nine touchdown receptions and becoming the favorite target of quarterback Matt Ryan. In a three week stretch earlier this season White recorded 27 receptions for 388 yards and four touchdowns, against defenses in Baltimore, Cincinnati, and Tampa Bay.

Defensive Player Of The Year: Defensive end Julius Peppers gets my vote. When I watch the Bears defense this year, with a healthy Brian Urlacher in the middle, one thing stood out ~ 9-Year veteran Julius Peppers. All season long Peppers forced opposing offenses to pay attention to where he was on the field. Double-teaming him off the edge, opening up the middle for linebackers like Urlacher and Lance Briggs to step in and make plays. Applying pressure so defensive backs Charles Tillman and Chris Harris could combine for nine interceptions. Leading a defense that allowed just 276 points all season, Peppers was dominating in 2010. From the mouth of Brian Urlacher "he pretty much eliminates one side of the field all game long."

Comeback Player Of The Year: Seattle receiver, Mike Williams. All due respect to the quarterback of the Eagles, and I'm sure he would agree, you've got to tip your cap to this kid Mike Williams. His former college head coach Pete Carroll gave him an opportunity upon being hired in Seattle, and Williams hasn't taken it for granted. 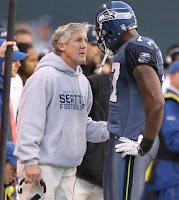 After a disappointing first three years in the league, a stretch which saw him play for three different teams and subsequently getting cut by all three, Williams played himself out of the NFL in 2007. When Williams got the call from Carroll in early 2010, he came to Seattle healthier than he's ever been, in better shape, and ready to prove he could play in this league. This season Williams caught 65 balls for 751 yards giving the Seahawks a number one option through the air. On the heels of their NFC West division championship, the Seahawks awarded the 6-5 receiver with a three- year contract extension. That defines comeback, and he's a kid you can feel good about now.

NFL Most Valuable Player: ho hum, Tom Brady. The Patriot quarterback has been the undisputed MVP since his Week 13 carving up of the Jets secondary. In that game Brady completed 21 of 29 passes resulting in 326 yards passing and four touchdowns. Currently Brady is in the midst of 335 consecutive passes without an interception, his last coming in Week 6 against the Ravens. Throwing a touchdown pass in each of his 16-starts Brady has led the NFL this season with 36 scores and just four interceptions all season. His team is 14-2 with home-field advantage throughout the postseason and are currently sitting in the driver's seat to North Texas and the Super Bowl. If your vote reads anything other than Tom Brady, QB New England, you should have your vote stripped away.

We're going to post our Postseason Power Rankings & our Pick 'Em: Wild Card Weekend later this week, till then . . Get After It!
Posted by Lynchy at Monday, January 03, 2011