To The Biggest Of Dances We Go

Two rabid fanbases, two prolific quarterbacks, defenses lead by future hall of famers, in the Lonestar State, if we're getting locked out this coming Fall, what better way to end this season? With hours remaining before kickoff, let's empty the proverbial Super Bowl clip . . .

(scroll to the bottom for Super Bowl pick 'em)

The Weather of Super Bowl Week(s) Hey! People covering the game from North Texas - THE GAME IS IN INDOORS! Not a single person in the U.S. feels bad that an ice storm slammed Fort Worth the week leading up to

the Super Bowl. Roofs are collapsing all over the Northeast corridor and it baffles me that we've seen 200 reports about the weather this week in Dallas. Of course there is no budget in those cities for snow removal, it never happens! You should have packed gloves, when you get home you're back in it! As for that Super Bowl scheduled in New York for 2014, good luck! Miami, New Orleans, & Arizona are the only three sites which should ever host a Super Bowl, 'nuff said!

Sounding off on Big Ben. Ever since the Steeler quarterback rode his motorcycle without a helmet back in 2006, subsequently bouncing his skull off the trunk of a Chrysler, I knew the youngest quarterback to lead a team to a Super Bowl win was missing something in the good judgement department. 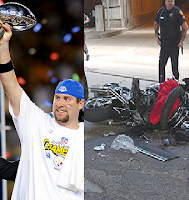 Another Super Bowl victory and two sexual assault allegations later, my call on Roethlisberger remains slightly the same; Future HOF'er - still a creep. They'll be no rooting for ole' Big Ben in this corner tonight. They'll be no cheering for his comeback and calls for a second chance over here. Maybe Roethlisberger did get scared straight, and maybe he did find 'Jesus.' Seeing his career flash before his eyes while being suspended for the first four games of this season, sure I guess it's possible he'll be a better person going forward. However, I'll refrain from making that personality call for at the very least a few more years of better off-the field behavior. Again, he's one of three quarterbacks I'd want under center on this stage, doesn't change what he really is.

The 'other' quarterback. Packers quarterback Aaron Rodgers has an opportunity to place himself in THAT category. Ring rocking quarterbacks Brady, Brees, the Mannings, and Roethlisberger, winners of eight of the last nine Super Bowls. Since the preseason, everyone from coast to coast suspected after his 4,400 yard passing and 30 touchdown season a year ago, Rodgers was ready to take this 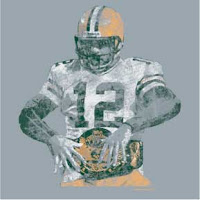 next step and lead the Packers to the Super Bowl. Back healthy from two concussions earlier this season, Rodgers entered the postseason with a path that would surely lead to three straight road games to reach North Texas. Winners in Philadelphia, Atlanta, and finally in Chicago, Rodgers is playoff tested. In this years playoffs, Rodgers has thrown for close to 800 yards, six touchdowns, while completing 66 passes. As a card carrying member of the visceral 'Favre hate' club, I feel very strongly when I say it, a Super Bowl win not only puts Rodgers ahead of the Packer legend, and his game will prove it. For the 23 teams that passed on the California quarterback in 2005, you're in for a tough night if Rodgers ends up hoisting the Lombardi trophy.

The Steeler X-factor. They've defined championship pedigree over a decade. They've got a quarterback who above all knows how to win at the highest level. They've got the reigning NFL Defensive MVP roaming the secondary and a dominating slew of linebackers. Yet tonight, it's their offensive line who must come to

play, in particular 13-year veteran tackle Flozell Adams & backup center Doug Legursky. Adams has the unfortunate responsibility of battling blitzing linebacker Clay Matthews and the 2009 Defensive NFL MVP, cornerback Charles Woodson. 'The Hotel' will have to be on his game if the Steelers plan on rushing the ball and protecting Big Ben. If Matthews can steal the edge from Flozell, expect it to be a long night in Pittsburgh. As far as Legursky goes, he's had just a couple weeks to prepare for B.J. Raji, the Packer monsterous nose tackle and defensive tackle Ryan Pickett as well. Due to the injury of rookie center Maurkice Pouncey, the Steelers have had to patchwork their offensive line which can't be good for running back Rashard Mendenhall and quarterback Ben Roethlisberger.

The Packer X-Factor. Charles Woodson. Tramon Williams. Sam Shields. Charlie Peprah. Nick Collins. Atari Bigby. Otherwise known as the Green Bay secondary. Led by Woodson, the Packers secondary is going to have to work hard in this game and stay home while

Roethlisberger buys time in the pocket trying to extend plays with his young receivers flying around. From Tramon Williams and his six interceptions during the regular season to Nick Collins and his seventy tackles at the safety position, the Packer secondary is littered with speed and guys who know where to be in Dom Capers defense. A defense that puts pressure on the quarterback is going to have to adjust in the secondary due to the plays becoming more jailbreak like for the Steeler offense as Ben trys to make those plays he's become famous for, an escape artist in his own right. If he can take advantage of the young kids like Sam Shields, the Packers will be on defense for a long time.

Pick 'Em: Here I go. I'm a big believer of a couple of things, and karma is one of them. I didn't see the Saints winning the Super Bowl last year, I didn't see Ben winning another one in '08, and I didn't see the Patriots missing 19-0 the year before. So I'm changing some things up here and going all positive on this one. Rodgers and head coach Mike McCarthy deserve a Super Bowl win on their resume right now, before they begin to labor for one.

Charles Woodson is one of the games greatest talents of all-time, and he too should get that ring. I can't fathom a world in which people compare Tom Brady and his record breaking numbers to the likes of Ben Roethlisberger. Not a person on this planet actually looks at the Steelers recent run as a dynasty, the play of Peyton Manning and that of the New England Patriots dominates all over the past ten years, like it or not people of Pittsburgh. This game is going down to the wire, and given my poor performance in postseason picks, you can go the other way if you'd like. Packers -3

For fun: 'The Props'


Thanks for reading all year long!
Posted by Lynchy at Saturday, February 05, 2011