With 2010 fading fast in the rear view, let us take a look back. LynchyRightNow will explore our Top Ten Stories of 2010. From the birth of 'Who Dat Nation' in 'Nawlins to the stunning blow to Geno Auriemma's Lady Huskies in Palo Alto, last year was an amazing one. 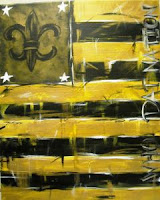 New Orleanians everywhere stood up! From Sean Payton's gutsy onside-kick call to quarterback Drew Brees record setting game, the Saints victory was one for the ages. For the millions watching at home to the thousands in Miami's Sun Life Stadium, the New Orleans Saints victory over future hall of famer Peyton Manning and the Indianapolis Colts was flat out exciting. Images of Drew Brees and his son with confetti raining down on them are going to be trapped in Super Bowl lore forever. Denying Manning of another Super Bowl ring, winning for the people of New Orleans who were devastated by Hurricane Katrina just years earlier, these Saints were historic. 'Who Dat Nation' came alive and we kicked off the year in a fantastic way.

Friday, February 19th - Tiger Woods holds a public apology press conference for his marital indiscretions. It's not an on-the-field story, I respect that, but was anything bigger than the scandal that rocked Tiger Woods' personal life in 2010? Exactly. The ridiculousness that was his public apology to his fans, his family, his sponsors, his fellow golfers, and his wife,

instantly became the most absurd thing I'd ever witnessed. On February 19th every major news channel carried the press conference of a golfer apologizing for cheating on his wife countless times. Think about it for a second, not a world leader with breaking news, a golfer, was captivating the nation on every major news medium, discussing something which has absolutely no affect on our lives what so ever. Around-the-clock coverage focused on a gossip story about infidelity, coverage normally reserved for oil spills in the Gulf of Mexico, terrorist attacks on 9/11, and earth shattering hurricanes slamming into the 'Bayou. Yes, Tiger Woods press conference is on this list.

Monday, April 5th - Butler's miracle run ends; Duke wins fourth National Title. The Butler Bulldogs run in 2010 was a memorable one. The 5th seeded Bulldogs from the West Regional were THE STORY of the 2010 NCAA Tourney. Names such as Shelvin Mack & Gordon Hayward became household last March as the Bulldogs took out such NCAA powerhouses as Syracuse and Michigan State in their path toward the National Title game. Their Final Four ticket punching performance against a very hot

Kansas State team in the regional final was astounding. Hayward poured in 22 points to lead the Bulldogs as Shelvin Mack hit three crunch time 3-pointers. Then there was the holding off of Tom Izzo's Spartans, as Gordon Hayward ripped down a rebound with seconds remaining to earn a 2-point victory and put them in the title game. Could it happen? Could Butler win the National Title? Unfortunately a last second half-court shot wouldn't fall against the Duke Blue Devils, and Butler's miracle run had ended. The only team which Butler allowed to score over 60-points in the tourney (61-59 final), defeated them. How fascinating was 2010? The Butler Bulldogs run through the NCAA Tournament is a mere afterthought, that's how fascinating it was.

Sunday, April 11th - Phil Mickelson's shot on 13 at Augusta. With Tiger lurking, Lee Westwood and Anthony Kim playing strong, it was going to take a gutsy performance from Phil Mickelson to pull on his third green jacket. Shooting a

final round 5-under 67 was exactly what Phil Mickelson accomplished to do just that. However, it was his shot on the 13th hole which defined his 2010 Masters victory. A creek before the green, ball lying on pine needles, two trees looking right at him, while the branches shade the course, Mickelson opted to smash the ball onto the green in one crazy/gutsy/mind numbing swing, and he did it. No protecting his slim lead, no laying up and playing it safe, just raw "I'm going to win this thing" attitude. Think we're going to watch The Masters in April of 2011 and not see this replay again and again? Think Phil isn't amongst the favorites to win this thing each of the next five years, at least? With a shot like that, Mickelson etched his name into golf history and did his part to make 2010 even better.

Thursday, June 17th - The Lakers defeat the Celtics; Winning their 16th Championship. When they're the best two teams in The Association, the drama is at an all-time high. Redeeming their 2008 Finals loss to those 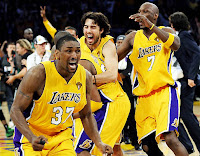 very same Boston Celtics, the Lakers and Kobe Bryant raised the franchises 16th Championship to the rafters in June. With Celtics big-man Kendrick Perkins out due to injury, game 7 of the NBA Finals saw Pau Gasol pull down 18 rebounds and add 19 points to lead the Lakers to the victory. The Lakers were forced to win the final two games of the series to lock up number sixteen and they did just that. Kobe Bryant won his fifth NBA Championship and placed himself amongst the Laker greats by winning one right through the rival Boston Celtics. 2010 In the NBA yet again reminded us why these two franchises are more special than any other and why we love it when they're playing on the games greatest stage.

Tuesday, July 6th - The Decision, Lebron James joins the Miami Heat. Immediately after the NBA Finals wrapped, the LeBron James' free agency sweepstakes went into full swing. It was the will he, won't he drama of the summer. Would he remain in Cleveland? Would he become a New York legend? Would he join Dwyane Wade on South Beach? Was Chicago

putting together a package to lure LeBron? What was the games greatest player prepared to do with his foreseeable future? Then on July 6th, in a surreal hour-long Worldwide Leader broadcast live from the Greenwich, Connecticut Boys & Girls Club, LeBron James made his 'Decision.' As LeBron James sat across from Jim Gray and uttered the words "this fall I'll be taking my talents to South Beach . ." he instantly became a villian in the city of Cleveland, a hero in Miami, and created a team that would be relevant for years to come. You may not have liked it, it may have made your stomach turn, either way it was the biggest story of the summer and proved yet again how quickly things can change in professional sports.

Saturday, October 9th - South Carolina 35 Alabama 21. Yes, it was the biggest season shaping moment in college football. As the Gamecock fans rejoiced in Columbia, South Carolina when the clock clicked zero, the entire college football landscape changed in 2010. The Gamecocks stunning upset of #1 ranked Alabama opened up both the SEC and the future BCS National 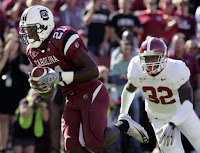 Championship game. The defending champion Crimson Tide left Columbia knowing they would no longer be the preeminent favorites, they had cracks in their foundation which had seen them win 19-straight, and that each team going forward believed they now had a shot at beating Nick Saban's powerhouse. For teams like Oregon, TCU, Boise State, Oklahoma, and Auburn to move their way into the top slot, October 9th had to happen. When Steve Spurrier knocked off Alabama, it did just that, made what we have shaped out this season possible. When both LSU & Auburn, fellow SEC monsters, beat Alabama later that season, it had Columbia to thank for planting the seeds that the Crimson Tide could be beat. And you thought I was reaching with this one, didn't you?

Monday, November 15th - Michael Vick v. The Washington Redskins. So much has been said on both sides of the coin about one Michael Vick. Yet on November 15th, Michael Vick smashed his way into NFL history. The Eagle quarterback led Philadelphia to a 59-28 win over

division rival Washington. However, that's not even close to the impressive part. Vick used his legs, rushing for eighty yards on eight carries scoring two touchdowns. Vick used his arm, throwing for 333 yards on twenty completions scoring four touchdowns. For those of you counting along at home, that's six touchdowns which Vick accounted for on Monday night, November 15th. The NFL hall of fame requested Vick's game worn jersey from that record setting night. A guy who spent 18-months in Leavenworth Federal Prison, will now be able to go Canton, Ohio and see his jersey hang in the Hall of Fame for the rest of his life. You want 2010 headlines, how is that not one of them?

Saturday, December 11th - Cameron Newton wins 76th Heisman Trophy. Do we even know how long Cam Newton and Auburn will be able to celebrate his Heisman Trophy? For much of the fall we witnessed the Auburn quarterback 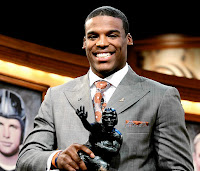 rip up his opponents on the field. We saw him make dazzling plays that were only worthy of a Heisman Trophy winner. Then we saw him be at the epicenter of controversy. Had his father taken money or requested money for his sons services? How much of this was Cam aware of? What else did they do? Was his past actually in his past? Unfortunately, for Cameron Newton, an amazing season at Auburn will forever be overshadowed with controversy. If Reggie Bush can be erased from Heisman history, why can't Cam? On Saturday night, December 11th I went away thinking one thing, was this for good? Will 2010 eventually be left void of a Heisman winner? We'll find out at some point.

streak, that was impressive. When Jeanette Pohlen, Stanfords senior guard, scored 31-points leading the Lady Cardinal to a 12 point victory over UConn on Thursday night, well that was just stunning. Not only had Connecticut won 90-straight games, they'd won those 90 games by something like 30 points per, and it stll didn't make Stanford flinch. Pohlen led the Cardinal by hitting five three-pointers while her teammates helped hold UConn's star Maya Moore to just 5 of 15 from the floor. Palo Alto errupted as Stanford not only held off UConn in the final minutes but increased their lead to twelve points and made Auriemma's team look human. Anytime a streak of that length is snapped in such convincing fashin, well yes it's on the list!

With two undefeateds in Auburn and Oregon squaring off for the National Championship of college football on January 10th, will 2011 open as exciting as 2010 finished off? We can only hope, till then . . .Now You Know!

Wishing you all a Happy New Year from LynchyRightNow.
Posted by Lynchy at Saturday, January 01, 2011