Uncle! Uncle! Uncle! The Falcons are still begging from Atlanta to Wisconsin. After Aaron Rodgers put on a passing clinic against the top-seeded Falcons on Saturday night, they've served notice;

By all accounts, they're doing the damn thing.

After knocking off the NFC East champs a week ago, the Packers went into the Georgia Dome and ripped it up - with ease. Putting 48-points on Atlanta in their place, you've got to give them credit because Rodgers and 'The Pack' are peaking at the right moment. His cast of receivers are second to none. 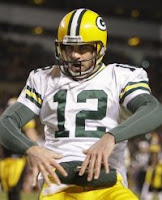 Between the veteran Donald Driver and Greg Jennings, the Packers receivers go get the ball. No pocket break-down is too hard for Rodgers to escape and find Jennings, Driver, and Jordy Nelson. Have Packers fans realized that Rodgers has more than replaced Brett Favre and he's actually a top flight signal caller in this league? His 31 of 36 performance in Saturday night's Divisional Playoff game is mind-numbing. And that defense? Raji, Matthews, Hawk, Woodson, and newcomer Tramon Williams, they're getting after it!
Posted by Lynchy at Saturday, January 15, 2011