Three Up, Three Down

The Indianapolis Colts aren't dead yet. Their defense came to play on Sunday, holding a vaunted Raider rushing attack to just 80 yards on the ground. 1000-yard rusher Darren McFadden was held to just 45 yards rushing with 26 coming on one carry. Even more impressive than their rush defense was their 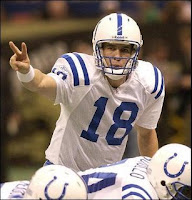 own ground game. Welcoming back injured running back Joseph Addai on Sunday, the Colts' 30th ranked rushing offense ran for 191 yards, close to five yards a carry. A 31-26 victory in The Black Hole sets up the Colts to both win the AFC South and host a 1st-round playoff game with a win against Tennessee next week. Peyton and the Colts are proving you don't win 12-games a year for nearly a decade and fall off overnight.

The St. Louis Rams might just get in here. It wasn't pretty, however the Rams 25-17 victory against San Francisco puts them in position to get into the postseason with a repeat performance in Seattle next week. On an afternoon where the Rams' rushing game was nowhere to be found, rookie quarterback Sam Bradford put St. Louis on his shoulders. Completing 28 passes for 292 yards while staying interception-free for the sixth time this season, Sam Bradford showed yet again why he was the 2010 #1 overall pick. The Rams, at 7-8 from 1-15 a year ago, are by far the biggest surprise this season.

The Green Bay Packers are the real deal, believe it. Their 45-17 dismantling of the Giants on Sunday afternoon should serve notice to the rest of the NFC. They're going to hit the playoffs as the Wild Card team nobody wants any part of. The Packer defense forced six turnovers, a healthy Aaron Rodgers threw four touchdown

passes, and Green Bay flexed their muscles for the second time in two weeks. In Rodgers return from his second concussion this season he completed 25 passes for over 400 yards passing, torching the Giants secondary. Even more impressive than their Pro-Bowl quarterback is their hard hitting, turnover forcing defense. Ranked 5th in the NFL in sacks and 3rd in INT's, the Packers are causing havoc on opposing offenses. 2Nd-Year defensive tackle B.J. Raji is breaking out in 2010, leading all nose tackles in sacks, he's one of the reasons Green Bay is in control of their own postseason destiny heading into week 17.

The New York Jets continue their slide. Yes, they snuck in the back door of the AFC playoffs despite losing 38-34 in Chicago on Sunday afternoon. The supposed overpowering Jets defense is allowing 117 yards per game on the ground over the past four weeks. 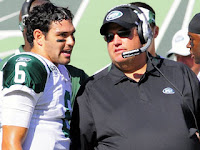 Quarterback Mark Sanchez, injured shoulder aside, has looked very pedestrian and as a result so has the Jets offense. Heading into the postseason on the heels of a second half to the season which has seen them go just 4-3, the Jets can't be confident in a deep postseason run. Furthermore, this is a team that can't just stay out of the newspaper. Never mind the off-the-field activities, they've never seen a camera they didn't find a need to stop and talk to. Take something from the 13-2 Patriots, having nothing to say actually works.

The San Diego Chargers are yet again a disappointment. Norv Turner would be fired before weeks end if I had anything to say about it. While I don't, the Chargers should really start to think seriously about both head coach Norv Turner and general manager A.J. Smith. Why were both Marcus McNeil

and Vincent Jackson not inked before the season started? McNeil is responsible for protecting your franchise quarterback, and Jackson is the top target of that very same Pro-Bowl caliber quarterback Phil Rivers, yet these are the players A.J. Smith decides to draw the line in the sand on? As for Norv, who should take responsibility for this club under performing? All this talent and the best Norv Turner can do is produce an 8-7 team in a very winnable division. The Chargers 14-point loss to a 4-11 Bengals team yesterday should shake up a very stale organization.

The New York Giants are in danger. Could their playoff hopes have been extinguished by DeSean Jackson last week? Since their mid-season five game winning streak, the Giants have taken a tumble. Heading to Washington next week, the Giants have won just three of their last seven games including losses against playoff bound Green Bay and Philadelphia. Even more alarming should be the 83-points this Giants team has given up in their most recent two losses. The Giants secondary has allowed seven touchdowns over that time and is showing huge holes for good quarterbacks to pass through. The Giants rushing game has been very average and performances like running back Ahmad Bradshaw's 12 carry, 31 yard game is exactly why. After turning the ball over six times on Sunday, the Giants are not only going to have to beat Washington on the road but also wait for help from the Bears against Green Bay.
Posted by Lynchy at Monday, December 27, 2010