We're going to attempt to weed our way through week one of the College Football season avoiding all things penalty and punishment. That means no more about Coral Gables, Columbus bores me, and I'm side-stepping recent events in the 'Bayou. With that...

Who is the 2011 version of James Madison vs. Virginia Tech, a shocker in the early going?!? I'm going to go out on a limb and say with a ton of confidence that the preseason twelfth ranked Gamecocks of South Carolina should be on upset alert against East Carolina on Saturday afternoon. Forget that the Pirates of ECU return quarterback Dominque Davis, second to only Sooner signal caller Landry Jones in completions a season ago, they've got a ton going their way. (1) A neutral

field, this one isn't in Columbia, SC they've got to meet in Charlotte. (2) Spurrier is still playing games with his quarterback, the oft-suspended Stephen Garcia. (3) You saw how great the Gamecocks handled hype last season, a 28-31 loss to Kentucky just a week after knocking off defending National Champions Alabama. (4) South Carolina has got a massive conference game with Georgia a week from Saturday, I'm guessing they've begun looking past East Carolina to Athens. And (5) Who's East Carolina?!? We know the Gamecocks and Marcus Lattimore, Alshon Jeffery, and all-world corner Stephon Gilmore. Exactly my point, you don't know the Pirates and I'm sure they've been geeked out about this game for months?!? Sure, I'll put a little something on 20.5 point dogs.

All eyes on Cowboys Stadium, and it's not even a Sunday! The preseason #3 Oregon Ducks vs. #4 Bayou Bengals in week 1 at a neutral site?!?! Despite recent events in Baton Rouge, it shouldn't take away from the type of game we're going to see on

Saturday night in primetime. We're talking two of the fastest teams in the country kicking off the college football season, that's how big this is. One of these two National Title contenders is going to wake-up on Sunday morning with their championship hopes vanished before they could get going. When is the last time we saw programs of this caliber laying their season on the line in week 1?!?! Kenjon Barner and Darron Thomas lit up New Mexico to the tune of 72-0 in week 1 last season en route to their National Championship appearance, that isn't happening on Saturday. New Mexico didn't have LSU senior safety Brandon Taylor, and John Chavis' amazingly fast defense. Ducks & Tigers put their necks on the chopping block on Saturday night. Quack, Quack.

Boise State, Kellen Moore @ The Georgia Dome vs the Dawgs. It's a man move for both teams. Georgia knows that a win against Boise State does nothing but help them in the polls as the Broncos rip through the rest of their schedule. For Boise, it's their annual move to give themselves relevance in the National Title bid at seasons end. Last season it was Virginia Tech 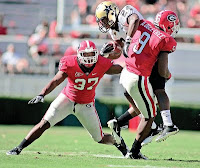 (a win 33-30), in 2009 it was Oregon (a win 19-8), and now it's Georgia's turn. However, I'd caution Boise at stepping into the SEC looking to snag their weighted win. Alec Ogletree isn't garnering preseason hype in Athens just because he's switching positions to inside linebacker, he's that good. Heisman hopeful Kellen Moore better keep his head up and Boise State better take Georgia seriously. In his second full season under center at Georgia, Aaron Murray looks to improve on a season which saw him complete 61% of his passes while throwing only eight interceptions on top of twenty-four touchdowns. The Broncos get a win here, but it isn't walk in the park.

My big Heisman expectations; You thought I was going to see this season open without pushing all my chips into a Heisman candidate? While I don't believe he's even the best football player in his state, Oklahoma quarterback Landry Jones is the Heisman frontrunner. Jones will jump out very early 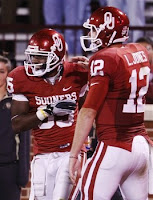 when Oklahoma heads to Doak Campbell and Tallahassee against Florida State in two weeks. Against Florida State's secondary last season, the Sooner quarterback threw for well over three hundred yards and four touchdowns. Senior receiver Ryan Broyles and Jones will hook early and often this season separating himself from the Heisman pack and the contingent pulling for Boise's Kellen Moore and Standford's Andrew Luck.

Let's get to it already!