Are the Eagles that team?

At this point, it's an honest question. With the biggest prize in a post-lockout NFL under contract, it's arguable that Michael Vick's Philadelphia Eagles are every bit ready to make Andy Reid a Super Bowl winning head coach at last, isn't it?

For starters, this entire thing hinges on #7 under center. At 31-years old, Michael Vick is still the most electric player in the sport, no questions asked. 8-4 As a starter just a season ago, Vick was showing much more than flashes of his former game, he was reinventing it. With career highs in completion percentage, quarterback rating, passing 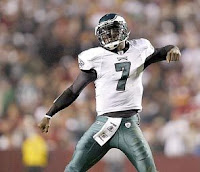 yards, and touchdown passes, Michael Vick is no longer the player who threw 26 interceptions over two seasons ('05-'06), he's efficient. Could this have worked out any better for Eagles owner Jeffrey Lurie?!? Taking a flyer and notable risk on a post-prison Michael Vick in the summer of 2009, Lurie is being paid off just two years later as Vick leads a charged-up young core of offensive weapons to an early season favorite to reach Lucas Oil Stadium and the Super Bowl. Just take caution, the health of Michael Vick is as important to Philadelphia as Manning in Indianapolis, Brady in New England, and Brees in New Orleans, it is.

Now to their off-season work:

While I criticized Philadelphia for not getting more from top available quarterback, former Philadelphia back-up turned Arizona starter Kevin Kolb, they had a plan. That plan you ask?!? To move on from overpaid cornerbank Asante Samuel and upgrade the secondary at the same time. With Kolb, the Eagles got a 2012 draft pick (2nd rounder to boot) and corner Dominique Rodgers-Cromartie in return. The 26-year old cornerback needs work, he's not a great tackling corner but

he'll get plenty of opportunities playing opposite the newly acquired off season prize Nnamdi Asomugha. Between all-world cornerback, Asomugha, and Rodgers-Cromartie, the Eagles have moved on from Asante Samuel and in doing so, upgraded their secondary. Samuel is a holdover from a secondary which gave up 31-passing touchdowns a season ago and is sure to improve with their new additions. Asante's proclamation on his own 'big-play making ability' is an overstatement to say the least. Philadelphia seems to have come out with one conclusion from watching game tape all off-season, the cover 2 cornerback Samuel isn't where they want this team to be headed. Philadelphia wants to get up on receivers and get after the quarterback. If Samuel is a trading chip at this point, they're still in very good position with Rodgers-Cromartie and Asomugha.

The secondary wasn't the only place where Philadelphia got better. After securing their pass defense, the Eagles went after their defensive line adding veterans Cullen Jenkins and Jason Babin. Babin has a history in Philadelphia having played for them back in 2009 and is sure to bolster a defensive line that recorded 39 sacks last year, Babin alone recorded 12.5 in Tennessee. Sixth in sacks last season Babin will be back under the direction of Jim Washburn in Philadelphia. Then there is Cullen Jenkins, a player Philadelphia must have had their eyes on for a long time because the moment 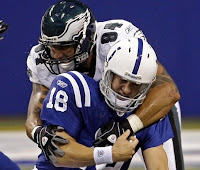 he became available to them, they went after it and signed him for a very low risk contract. Jenkins gives them size up front and is going to really solidify their defensive line. From jump this off season, Philadelphia has made moves to revamp their entire defense. Starting with the firing of Sean McDermott and virtually the entire Eagles defensive coaches, Reid is set to move forward with a defense that he believes will be the top in the NFC. For Reid, it wasn't just about adding new players. Aside from firing defensive coaches and choosing not renew contracts, he's getting rid of key players to a very poor defense in 2010. Quintin Mikell and Stewart Bradley are both already gone after Brodrick Bunkley was dealt as well, with Samuel rumoured to be the next, Philadelphia has really made changes on defense to pair with their high-powered offense.

Back to their offense. In less high-profile moves, Philadelphia added former Dolphin running back Ronnie Brown on a one year deal and former Bronco offensive tackle Ryan Harris. It's possible that Harris could be a Pro Bowler in Philadelphia system. In Philadelphia Harris is going to compete against long time Eagle tackle Winston Justice for that right side position, the blind side to the left handed Michael Vick, making him all the more important going forward. As for Ronnie Brown, I loved this signing for Philadelphia and for Ronnie Brown. It's never been Brown's decision to play in a wildcat offense and going to Philadelphia is going to showcase his ability to catch out of the backfield and spell LeSean McCoy in a more north and south running back position than he played in Miami. Harris and Brown both can have impact on an offense that is sure to be one of the more exciting offenses in the entire league.

I do believe that Philadelphia has made a ton of moves in this preseason that will make them better going forward, but buyer beware, this team still hinges on Michael Vick as we pointed out earlier and till I see DeSean Jackson in camp, I'm not going to think he's any different than the self indulgent wide receivers that we've yet to see win a Super Bowl; Randy Moss, Terrell Owens, etc.
Posted by Lynchy at Thursday, August 04, 2011