With Yahoo! Sports breaking the bombshell story on allegations on the receipt of improper benefits involving more than 72 players for the better part of the last decade at the University of Miami, the ACC should be quaking. Given the troubles on South Beach and with the Southeastern Conference sniffing around in Tallahassee and Death Valley, is Atlantic Coast Conference football on its way out?!?!

Former Miami Hurricane booster, convicted felon Nevin Shapiro, could quite possibly bring down the entire Hurricane athletic program. Shapiro's claims that he not only paid players and coaches but 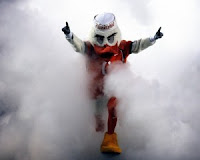 also gave them any and every benefit from jewelry and cars to prostitutes and cash are about as serious as things can get. There are pictures, receipts, and countless hours of Shapiro blowing the whistle on everything he did as a booster of the Miami Hurricanes athletic program. A man whom has nothing to gain from his story, already sentenced to years in federal prison for his involvement ($930 Million) in a Ponzi scheme, Shapiro is just a man with an axe to grind. This leads us to ask the question, what will and should become of The U?!?

The Death Penalty; The NCAA has the power to ban schools from competing in a sport without any preliminary sanctions in cases of particularly serious violations.

We've already spent twenty-years glorifying the acts of the 1980's Hurricanes who did what they want, when they want. Ask yourselves, are we going to spend the next twenty years referring to The 2000's as just another decade of blind-eyed, Hurricanes playing by their own rules?!? I don't have to paint a picture for us on this one, Nevin Shapiro is doing that all his own . . the Hurricanes are D-O-A.

Now to the fallout, The Atlantic Coast Conference.

If you are a fan of ACC football, as am myself, the reality is that it is very much in jeopardy. With Miami in peril, the Seminoles and Clemson Tigers undoubtedly to be courted by the Southeastern Conference into 2012, what's to come of this hoops conference with a football addiction? Winners of the last five national championships, the Southeastern Conference would like nothing more than to raid the ACC of Florida State and Clemson. You thought 'Noles v. Gators meant something before?!? How about Gamecocks v. Tigers?!? Could doomsday in Coral Gables mean death for the ACC?!?! Stay tuned. . .