Put on your big boy pants, it's Red Sox vs. Yankees mid-week. I'm picking this up in the fourth inning of the first of three at Boston's historic Fenway Park, with five games left between these two American League East heavyweights, what does the road ahead look like for the both of them!?!?

Q.) Do the Yankees need a definitive #2 frontline starter to win the World Series?!?!

A.) You can chalk this up as a good problem to have. Sabathia has notched 17-wins, while the Yanks have hung another 63 up in the standings. Do I think it's important, of course but this is a question you ask yourselves when you've guaranteed a postseason ticket already and with a month remains. All sarcasm aside, the Yankees have a second starter in 24-year old Dominican born 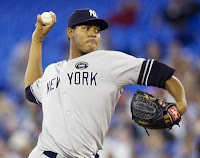 Ivan Nova. There is enough veterans on this team to carry them if Nova enters his first postseason and flops in his first or second start. If Sabathia has to battle the likes of Verlander, I'm comfortable with the Yankees offense and a strong six innings from Nova.

Q.) Do the Red Sox need a return of the injured Clay Bucholz to lock up their rotation for the post season?!

A.) No. It's something they took care of before the deadline by acquiring Eric Bedard. When you can roll out the best offense top to bottom in the major leagues and Jon Lester paired with Josh Beckett as your #1 and #2 respectively, you're set. Bedard and John Lackey will battle out the remainder of the season to see who gets the ball in the number three slot, my money is on John Lackey. However, with the ability to roll out Alfredo Aceves (2.86 ERA) in the event that either of them lets it go early and you still have a veteran like Tim Wakefield with veteran playoff experience, you've covered all your questions in the rotation.

Q.) Is there a worthy opponent for the only two 80-win American League East frontrunners in the postseason?!?

Excluding the National League and the Philadelphia Phillies (85 wins), I don't buy it. While the eventual American League Central champion Tigers have the hottest pitcher in the A.L., ace Justin Verlander, they've gone 4-8 against New York and Boston respectively. As far as Texas goes, they've got an offense that can mash with anyone but in the Red Sox most recent series against Texas, they took three of four from them in Arlington. This weekend the Rangers visit Boston with three of their 10-win starters going, we'll have a better idea if they are legitimately a contender by Monday morning.

Now to the Yankees. After wrapping up Sabathia's first win against Boston this season earlier tonight, the Yankees have got to feel pretty good about themselves. Taking two wins in Boston this week is critical for New York. While they'll get a boost from Alex Rodriguez once he returns from his thumb injury, they're a different group led by a different core. Gone are the days of Jeter, Posada, Rivera and Pettitte. This 2011 Yankees team are lead by second baseman Robinson Cano and outfielder Curtis Granderson in the midst of two outstanding seasons. The twenty-eight year old Cano is one of the toughest outs in the majors at this point. As far as Granderson goes, he's a legit MVP candidate. Granderson is atop the leaerboard in both homeruns and RBI. On pace to have career highs in nearly every offensive category, Granderson is much more than a table setter for the Yankees, he's the centerpiece of their lineup in 2011. The ageless Mariano Rivera has already hung 35 saves, good for second in the A.L., and 26-year old right hander David Robertson has given the Yankees a very strong set-up man who has allowed just eight earned runs in over 55 appearances. If New York can improve their season record against Boston from 2-10 heading into this series to say 7-11, they'll feel great going forward and into the postseason.

In Boston, things are just as good. Both Beckett and Lester appear to be healthy and pitching very well heading into September. A rejuvenated David Ortiz has had a excellent 2011 with a .313 batting average while slugging 27-homers. The previously mentioned Alfredo Aceves, Daniel Bard, and Jonathan Papelbon lock down a Red Sox bullpen that has been on top of their game all season long. With Adrian

Gonzalez finding his homerun swing in Texas last week, All-Star Kevin Youkilis expected back from injury any day now, and Carl Crawford showing signs of life as of late, the Red Sox look to be headed into September looking fantastic. Pleasantly surprised by the play of catcher Jarrod Saltalamacchia in his first full season behind the plate in Boston and that of utility outfielder Josh Reddick who has supplanted the injured J.D. Drew as the everyday right fielder, the Red Sox are getting help all over. Needing to go just 18-10 in their final twenty-eight games to reach 100 wins, the Red Sox are right on pace to where they thought they'd be heading into this season. Now imagine if they hadn't started out with a 2-10 record?