We're on the eve of a slew of preseason football games, so I should warn you we won't be talking about football here, not tonight. With the Pirates moving out the back door of the National League Central, the Yankees recovering from their rocky trip to New England, I'm all over America's past time.

0-4 Against American League East division rival Boston, 16-2 against the rest of baseball, Do the Red Sox have Yankee C.C. Sabathia's number?!? It's a good question giving Sabathia's most recent six inning / seven hit performance in New York's 10-4 loss to Boston this weekend. An earned run average north of 7.00 against the Red Sox potent offense, paired with his win-loss record against said Red Sox would be enough to respond soundly, yes Sabathia has a major problem with Boston. However, it isn't just a Sabathia issue. Cy 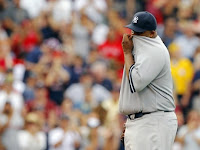 Young front runner Jered Weaver (who we're getting to, keep reading), has an earned run average of 1.78 this season, yet in his one start against Boston, he allowed three runs over six innings for a 4.50 ERA. Mariners ace Felix Hernandez, in two starts against the Red Sox, he's allowed eight runs in 13 innings for a 5.40 ERA. So, it isn't just C.C. Sabathia, it's the entire American League. The Red Sox team OBP, OPS, slugging percentage, and team batting average are all tops in baseball. They've scored more runs than any other team, have more hits, and have forced free bases 427 times this season. For an offense that can score runs and work a count, they're doom and gloom for any ace, this side of Justin Verlander anyway.

This is the part we're I puff out my chest as a fan of those Boston Red Sox. While the rest of the media, including that in 'The Hub,' are downplaying the Red Sox 10-2 record against the New York Yankees, I'm not about to do that, not at all. In my "not-so-humble" opinion, the Yankees were one bad inning from Red Sox ace Jon Lester away from being swept back to the Bronx down three games in the A.L. East, they got away with one as far as I'm concerned. There isn't a pitcher,

not legendary closer Mariano Rivera nor staff standout C.C. Sabathia that strikes fear in the Red Sox patient offense. No amount of hits or homeruns from the likes of Curtis Granderson, Robinson Cano, or Mark Teixeira can dig too deep a hole for the offense in Boston not to climb out of. From Jacoby Ellsbury and Dustin Pedroia through Alex Gonzalez, Kevin Youkilis, and David Ortiz, no offense is as tough one through five as the Red Sox, none. What did this weekend prove? What does a 10-2 record against the American Leagues toughest competition prove? It proves that at 72-43 the Red Sox are the front runners, and given their reaction to their late night heroics on Sunday night, it means something for this team to beat the Yankees each and every time out.

Are Angels front of the rotation aces Dan Haren and Jered Weaver the most under the radar tandem in baseball?!? In a word, YES! Dan Haren has been outstanding for the Angels this season, flat out. In twenty-five starts Haren has walked just (26) hitters, twelve less than Tigers ace Justin Verlander and twenty less than Yankee hurler C.C. Sabathia. With a sub 3.00 earned run average and three of his teams last four victories in which he started coming against

potential playoff race opponents New York, Texas, and Detroit, Dan Haren is possibly the games best #2 starter this season. As for the Angels ace, twenty-eight year old Jered Weaver, he's been unhittable. Weaver has pitched four complete games this season en route to a 14-5 record through August 5th. His ERA, an unthinkable 1.78 good enough for tops in the majors, his WHIP (stat geeks - walks & hits per innings pitched) is a stunning 0.94 only bested by fellow aces of contending teams Boston's Josh Beckett and Detroit's Justin Verlander. With twenty-six wins between them, it's a shock not more people are talking about the possibility of the Angels chasing down the American League West leading Rangers and maybe even the Wild Card leading Yankees?!?

Hagerstown, Maryland~ This might be the only time I ever mention this small town approximately seventy-two miles northwest of Charm City (Baltimore, MD). Why?!?! Because our 'National' Treasure, 23-year old hard throwing righty Stephen Strasburg, is on his way back starting in Hagerstown on Monday night. With more hype surrounding the Washington

Nationals top selection of 2009 than that of both Mark Prior and Brien Taylor combined, Strasburg has his work cut out for him when he returns from Tommy John surgery which sidelined him after a mind numbing start to his career just a season ago. In twelve appearences in 2010, Strasburg recorded 92 strikeouts, a 2.91 earned run average, and in doing so began to show glimpses of how bright the Nationals future may be. So, when Strasburg fanned four batters in an inning and two-thirds for the single 'A' Hagerstown Suns, we are of course going to begin to speculate, pontificate, and flat out obsess over a pitcher whom by all accounts looks to be the next big thing. Next stop: Woodbridge, VA on Friday night.

Side Note: I haven't been this excited to follow minor league baseball since 1994 and the year of the Birmingham Barons.