One of the best opening weekends I can remember, from the Horned Frogs and Bears to open the season to Maryland and Miami on Labor Day, the weekend did not dissappoint.

Send a card to Baylor & TCU, really. All due respect to the rest of a very exciting week one of college football, but Baylor set the bar very high. Combining for close to 100-points, Baylor's upset win 50-48 over last seasons Rose Bowl Champion Horned Frogs was the most electric game of the weekend. Up 47-23 headed 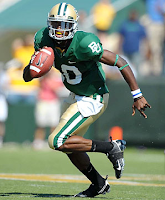 into the fourth quarter, Baylor watched as TCU ran up 25 unanswered points and pulled ahead with just moments remaining before Baylor kicked the game winning field goal. Baylor quarterback Robert Griffin threw for five touchdown passes, close to 400 yards, and completed all but six of his passes. Having won twenty-five straight games, TCU had done so by stiffling defense and fantastic dominance. In four quarters against Baylor, TCU was not that team. Giving up 50 points, four shy of their total points given up on the road last season, TCU was stunned by a tough, hard nosed Baylor team. It's the type of game that was an instant classic and something you have to take the time to go watch!

Way to open Irish, way to open. I'll admit, I cheer against all things Brian Kelly and Notre Dame, but they've made it easy. The Irish most recent debacle in South Bend, a 20-23 loss to South Florida to open the 2011 season. This week, the Irish have already named a new starter for their upcoming trip to Ann Arbor, from Dayne Crist to Tommy Rees, but does it matter?!? Their scheduling is to blame front and center. Forget that they just don't recruit speed, forget

that they're allowing Brian Kelly's game-day antics to be a story this week, they're behind the proverbial eight ball from jump. South Florida, a well-coached, up and coming program with every recruit whose first two choices were Florida and Florida State. At Michigan, the first game under the lights in The Big House in front of an amped up more than 100,000 Wolverine fans. Then against Michigan State, a team that traditionally plays them awfully tough. On the road to Pittsburgh to complete a very difficult first month of the season. Hey, Notre Dame, wake up please!?!? Who did Michigan warm up with? Western Michigan. Who did Alabama schedule week one? Kent State. How about Florida?!? Florida Atlantic. See where I'm going with this? If you want to be alive in January, do yourself a scheduling favor.

Controversy be damned, the LSU Tigers are for real. Beating up Oregon to open the season, 40-27 was exactly what head coach Les Miles had in mind. They capitalized on turnovers, displayed their raw speed, and jumped all over the Ducks tandom running attack of LaMichael James and Kenjon Barner allowing them to just a combined sixty-one yards. As it turned out, LSU didn't need embattled signal caller Jordan Jefferson, backup quarterback Jarrett Lee was conservative completing 10 of 22 with a touchdown and no interceptions. The LSU offense leaned on running backs Michael Ford and Spencer Ware when they needed to and let their opportunistic defense make plays. Next test for LSU is when they travel to Starkville and Mississippi State on Thursday night next week as they begin their SEC schedule.

Under Armour CEO Kevin Plank and the University of Maryland made a statement. The Terps were the only thing we were talking about after a long Labor Day weekend. In head coach Randy Edsall's debut, his Terrapins were all the rave Tuesday morning. A 32-24 victory over conference rival Miami was just the tip of the iceberg on Monday for Maryland. Sophomore quarterback Danny O'Brien lit up College Park throwing for 348 yards. Their

defense forced Al Golden and Miami into four turnovers. Then there was Kevin Plank's jerseys which were all the buzz on Tuesday. The Maryland alum turned CEO of Under Armour displayed the wildest uniforms since the 70's Houston Astros, adorned with the Maryland State flag, the Terps rocked college football's weekend. Whether we liked 'em or not, they were the only thing on the slate yesterday, exactly what Plank and Maryland had hoped for. If the Terps can get their red zone play under control, not only will the Randy Edsall era continue its great start, but the Terps could make a play for the ACC. Has Maryland football arrived? Or are they still a basketball school with a football issue?!?

Three quarterbacks could take the season to battle it out for The Heisman. Yes, I know it's only one week. However, Boise State's Kellen Moore, Stanford's Andrew Luck, and Oklahoma's Landry Jones stood very, very tall this weekend. Jones completed 35 of 47 passes while shredding the Tulsa defense for nearly 400 yards passing. With two weeks in

between the Sooners trip to Tallahassee and Florida State, expect Landry Jones to be plenty tuned up for the 'Noles. On the west coast, Cardinal quarterback Andrew Luck flexed in his senior campaign opener by completing 65% of his passes, throwing for two touchdowns and rushing for another. But the front runner after this first weekend has to be Moore. In Boise's 35-21 win over Georgia it was Moore who led the way. His third year in a row with a season opening win over a BCS Conference opponent, Moore dissected the Dawgs defense completing all but six of his thirty-four passes. With these three contenders the Heisman race is going to be an arms race.