The Frenzy; We're Off

This needs no introduction; The NFL Free-Agent Frenzy has got me all fired up!

My first reaction to the Minnesota Vikings pulling the trigger on their much talked about desire to add soon to be 35-year old quarterback Donvoan McNabb, ehhhhhhh. Best case scenario: McNabb can pull it together in a bounce back season and give the 'Vikes something more along the lines of what Favre was able to give them in 2009 (33 TD's & 7 INT's). Worst case scenario: You get a 35-year old quarterback who looks like Donovan McNabb (14 TD's & 15 INT's) a season ago. Either way, Adrian Peterson is still stuck watching a combination of Jackson/Bollinger/Ferotte/Favre/Webb and now rookie Christian Ponder and Donovan McNabb play in front him. Sorry AP.

The Dallas Cowboys & New York Jets took care of business on Wednesday and signed two of their own. It may have taken some work, fending off heavy offers from Tampa Bay and cutting veterans Roy Williams, Marc Colombo, and Marion Barber, but the Cowboys got their man in offensive tackle

Doug Free. In short, Free is going to protect franchise quarterback Tony Romo for the next four seasons and keeping him upright after missing over two months of last season due to injury was the most important move. Thumps up. As for the Jets, they had a decision to make. Either keep Santonio Holmes or Braylon Edwards, and they kept the right guy in my opinion. Holmes is going to continue to be a favorite target of quarterback Mark Sanchez, he can move after the catch, make plays in small places, and he's easily one of the most talented offensive players in the game. Thumbs up. (sidenote: If the Jets add Asomugha, you can forget passing on them, period.)

From The Beltway; A brief reaction from our readers in the nation's capital upon hearing the news of the Redskins and Patriots agreeing to terms on a deal which sends the much maligned Albert Haynesworth to the New England: "Haynesworth is a piece of sh*t, next." - Angry 'Skins fan

My thoughts exactly sir. I'm just not sure I understand the draw here. He's been average in a 3-4 defense in his past and while he's probably more effective than any future fifth rounder (the 'Skins compensation), I don't see him being more motivated in New England just because they win.

More on those New England Patriots, how did no one fill us in with the details of the new CBA earlier? Such as, New England must acquire every dysfunctional personality in the NFL in a 48-hour period. For as much as I don't care for the Haynesworth trade, I am buying the most recent 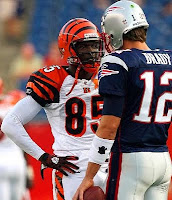 deal for Chad Ochocinco from Cincinnati in exchange for a bag of donuts and a restructured 3-year deal. Listen, we saw what a motivated for the first time in his career Randy Moss did with Brady in toe in 2007, if you get half of that with Chad, this is worth it.

Really Philadelphia?!? Getting Rodgers-Cromartie and second round pick from Arizona is not nearly enough for quarterback Kevin Kolb, not nearly! The Philadelphia Eagles, had Arizona over a barrel after wide receiver Steve Breaston robbed the Chiefs of nine-million plus in guaranteed loot. What were they going to do if Philadelphia sent Kolb elsewhere because they wouldn't give up a first-round pick?!? You think Larry Fitzgerald wouldn't have lost his mind on Arizona ownership if they didn't land Kolb? They would virtually have no shot at re-signing Fitzgerald when he hits free-agency, thus making the acquisition of Kolb a must. Instead of calling their bluff Philadelphia gets Rodgers-Cromartie who can't tackle, that only worked for Primetime at the corner spot. Despite what ESPN's Mike Sando says, Arizona stole Kevin Kolb. If I learned one thing from Wall Street: Money Never Sleeps (aside from the fact that Shia Labeouf is a terrible actor) it's that you sell high.

Ahhh, this feels good. All this free-agency in the past four days has got me smoking again! Man, do we love this game or what!

New podcast up tommorow, Audio Lynchy
Continue to follow us on Twitter
Posted by Lynchy at Thursday, July 28, 2011