On My Signal: Unleash K.I.R.F.

Keep It Real Friday, The Tourney Chronicles. I think I could copyright that. Maybe have a celebrity do the voice over or maybe just the coming attractions guy from the movie theater. Which brings me to another tangent; Is the coming attractions guy or C.A.G. as he's being dubbed, the same guy who announces nude dancers at a less than classy strip club? How do you get that gig? Back to the column, sorry about that, just a little something to ponder.

President Obama went soft on us; All chalk. He's got more important things to be concerned about, so we'll let it slide. Anywho, (I hate when people say that) Day 1 was as advertised, good but not great. As always, I've got some talking points and because this is "Keep It Real Friday: The Tourney Chronicles" I'm going to tear into a few things, one bite at a time.

Why the 16 seeds? Really, how necessary are they? Would the world be any different if we just gave the #1's a first round bye? East Tennessee State, Radford, Chattanooga, and Morehead State are the four #16 seeds in this tournament. The #16 seed has ever beaten a #1, and that won't change this year. Already, Radford was downed by North Carolina to the tune of a 43-point blowout. Chattanooga got roughed up by UConn, the result, was a 56-point loss. Carolina was playing without 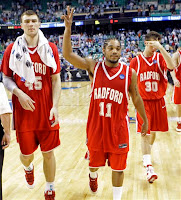 their star point guard, Ty Lawson, and Connecticut was without all-world coach, Jim Calhoun. Still, they destroy these two schools short handed. Here's my problem with the "Sixteenth Seed," while it'd be amazing and certainly stunning if they ever upended the #1 seed, how would that be fair to anyone? Sixty to seventy percent of fans have Connecticut and Carolina reaching the Final Four, their tournament brackets would be smashed. Connecticut and Carolina battle to a combined record of 55-8, while playing in the Big East and ACC respectively. Chattanooga and Radford had a combined 27 losses playing in the Southern Confernce and Big South. If one of these teams won, and the battle of the regular season that UConn and Carolina played, was all for nothing? That'd be sad. Give them a ticket to the NIT and all due respect to these programs, but in the words of the mean kid on the bus from Forrest Gump "Can't Sit Here," KEEP IT REAL!

It's still weird to me that Gonzaga is actually a tournament staple. Yes, I get the Yankees in the baseball postseason every year. I get the Spurs as a title contender in the NBA, every year. How in the world has Gonzaga joined those ranks, in college basketball? Syracuse and Jim Boeheim miss NCAA tournaments from time to time, but Gonzaga, every year they are in the tournament. Now I've been known

to hate a few guys who play for the Bulldogs of Gonzaga, most notably, Adam Morrison and Richie Frahm, however, when looking through my 2009 bracket, I'm forced to pick Gonzaga, but not to upset a team, they are a number four seed, in fact, they have the best record of any of the four seeds. To make it worse, I have to cheer for them to somehow knock off North Carolina, how does this happen? How does a team that went from tourney darlings turn into tourney staples? Luckily, the Bulldogs won their first round game against none other than, Akron. Here's my message to schools like Western Kentucky, who won again last night against a big name school in the tourney, you can be Gonzaga someday. You Western Kentucky, you can cheer for a potential player of the year who will undoubtedly be the only professional hoops player that smokes butts regularly. How can anyone cheer for Gonzaga now? KEEP IT REAL! I liked the bulldogs alot more when they were bumping off top seeds.

I'm making a ruling right now. Seven v. Ten and Eight v. Nine, those aren't upsets if the high seeds win, they just aren't upsets. Maryland beats California, not an upset, they are Maryland, who play in the ACC, against Duke, Carolina, and Wake Forest, probably better than we think. Michigan beating Clemson, 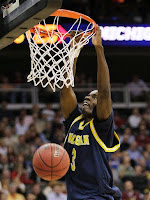 not an upset. Clemson has only three more wins than Michigan and they both play in power conferences that put multiple teams into the tourney every year. Texas A&M, a Big 12 team, that goes against Kansas, Texas, and Blake Griffin, several times this year, bumping off the Cougars of BYU, not an upset. In all reality, these are the best games your going to see in the first round. Boston College playing Southern California, great game tonight. Oklahoma State and Tennessee squaring off, great game. Ohio State and Siena, very intriguing. Going forward, CBS needs to make sure thsoe games are on in the prime spots, while I liked almost having my throat ripped out by watching American give 'Nova a game, all I really wanted was for CBS to leave (10)Michigan v. (7)Clemson on the big screen. KEEP IT REAL! I LOVE THIS SH*T! (sorry, I get out of control this time of year.)

Depending on time, we'll attempt to put out a mini-version of K.I.R.F. every day of the NCAA tournament. Excluding days where my paying job interferes. As always, KEEP IT REAL!
Posted by Lynchy at Friday, March 20, 2009