The Man, The Myth, The Sock

The tears pouring from our adult eyes, Aaron Boone's arms raised, Wake's head staring at the ground, that's where we were, pre-Curt Schilling. Post-Curt Schilling, we are a 2x World Series winning, swagger having, one of a few model franchises in professional sports. Oh, how times have changed.

Curt Schilling is everything we want in New England. You can tell yourself he isn't, you can also say he wasn't "that" impressive, but at some point, you've go to start being honest with yourself. We are glass half empty, opinion having, outspoken, Irish-Americans. Minus the blarney, that's what Curt is. The 3x World Series Champion is as advertised. He told you he was coming to Boston to break a curse, done and done. He told you he'd shut up 55,000 screaming New Yorkers, done and done. No disrespect, but Christ, he even co-hosted on WEEI's The Big Show, he got Belichick like respect on a Patriots ball-washing show, no one gets that. We love this guy, through and through.

My favorite New England athletes go something like this: (I'm 26, keep it in mind)

Pedro Martinez, the '99 post-season, in relief Martinez strikes out eight batters in six innings, holding the Indians hitless. Chills run down my spine just thinking about it.

Paul Pierce, forget the '08 season and Banner 17, I sat balcony seats watching Paul drop 19 in the fourth quarter of Game 3 of the '02 Eastern Conference Finals. Respect.

Matt Ryan, the Boston College Senior invades Blacksburg, Virginia and comes out with one of the greatest comeback victories the Eagles have ever seen. Drops back-to-back touchdown passes on the Virginia Tech secondary, in the pouring rain, when all is left for not.

You know what none of them did? Call it. That's what Curt Schilling did, that's why he belongs in the pantheon.

Brass balls, that's what it takes to break into the New England sports scene, telling us your here to break an 86-year old curse. As our eyes rolled, little did we know, he meant it. In 2004, Curt Schilling broke into our world, scratch that, he smashed 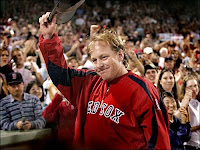 into it. Schill would go 21-6 that season, third most wins of any season in his career. No win that season would be more remembered than his 7-inning, 4-strikeout performance, in New York City, New York, on October 19th, 2004. Shutting down the Yankees, giving us a game 7, and in his words, shutting up 55,000 New Yorkers. Schilling gutted out seven innings on a bum ankle, and he did it for us, not for his legacy, not for the Boston Red Sox, but for us, and our 86-year curse, again, not the Red Sox curse, their fans. That is the most important part we forget, none of our beloved athletes come out and play the way they do if not for us, that's a fact.

So what if Curt talks more than any other of the athletes we love, why didn't we ever feel that way toward Manny? He didn't give us what Curt gave us. Why didn't we ever truly attach ourselves to Nomar Garciaparra? He didn't give you want you wanted. He wasn't controversy, he wasn't crass, he wasn't hardened, he didn't show that New England, "F*ck you, I'm better than everyone" attitude, that we truly want. Nomar, Pedro, Manny, did they ever tell you what they thought about Roger and Barry? Nomar, Pedro, and Manny, any of them ever tell you who they were voting for? We may not agree with Curt, but at least he gives you what you want, a voice.

Furthermore, are you going to really deny that he and not Pedro was what we needed? Petey was Petey, fantastic, but he needed more to win a title, well more is Curt, and Curt is more. Curt Schilling was the perfect guy to usher in this new type of Boston Baseball. Gone is the "whoa is me attitude" and the "pathetic loser" tag. Now, Boston Baseball is considered to be an arrogant, cocky, ring wearing, MVP rocking, helluva baseball club. That is what we can thank Curt for. Congratulations on a fantastic career Schill, and thanks for the rings.
Posted by Lynchy at Tuesday, March 24, 2009