I wanted to wait till the Elite Eight of the NCAA Tournament was finalized before I released Keep It Real Friday: The Tourney Chronicles. The fans requested, so I'm running with it.

The Big East is for real, and including me, we've all underestimated how good these teams really are. Louisville, Pittsburgh, Villanova, and Connecticut, all from the Big East, make up 50% of the teams in the Elite Eight. Also, there's a great chance that 75% of the Final Four will also come from 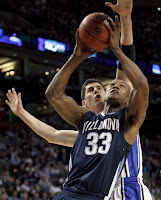 the Big East. I don't think we can recall a year where one conference so dominated the NCAA Tournament. Louisville knocked out the final Pac-10 team in the tourney, Arizona, in a 39-point blowout last night. Connecticut has won three games by an average of 33 points. After a 20-point dismantling of UCLA in round 2, the Villanova Wildcats followed that up with a 23-point win over ACC tournament champion, Duke. While not as impressive as their counterparts, Pittsburgh's Sam Young has averaged 23 ppg in the Panthers three tournament wins. For a conference that has long seen disasters in the NCAA Tournament, 2009 is rewriting the record books. Between Louisville's Terrance Williams, and the previously mentioned Sam Young of Pittsburgh, the Big East has the best teams and the best players in this tournament. KEEP IT REAL! Your tourney champ is coming from the Big East.

I can't say it enough, Oklahoma's Blake Griffin is BY FAR the best player in the country, and he deserves any postseason award that designates someone with that title, period. 30 points and 14 boards per game in the tournament. Oklahoma is winning by an average of 17 points per game, and doing it on the back of 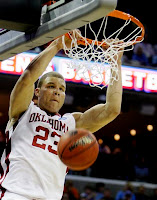 Blake Griffin. I'm going to do it, because someone needs to; In the words of Denzel Washington from Training Day "Tyler Hansbrough ain't got sh*t on Blake Griffin." Griffin flat out scores more and pulls down more boards than Hansbrough, by far. The Sooner power forward averages six more rebounds a game than Hansbrough. On the offensive end, Blake Griffin has had four more 30+ point games than Hansbrough, including a 40-point game. Not to mention that the Sooners played in a better conference this year than Hansbrough. Yes, that's right, the Big 12 was superior to the ACC this season. The Big 12 came within seconds of placing three teams inside the Elite Eight, and still have two teams in. Given the play of Oklahoma State, Missouri, Kansas, and of course Oklahoma, the Big 12 has more ammunition than the top heavy ACC. Luckily for us, we'll get to see Hansbrough v. Griffin tomorrow night. Stay Tuned and KEEP IT REAL!

Four #1's, Two #2's, and Two #3's . . ALL CHALK This is what the Elite Eight and Final Four were meant to be. Eight teams playing for four spots, all come from major conferences, tournament juggernauts, this is exciting. KEEP IT REAL! Leave the Cinderella's back at home where they belong. No Tom

Brennan, no Cleveland State, and no George Mason. We have Rick Pitino v. Tom Izzo, Sam Young v. Scottie Reynolds, previously noted Griffin v. Hansbrough, the Big East v. Big 12 in the West Region, hide the women and children, this is big time college hoops. It was cute to see everybody's bracket get busted when Wake Forest gets punched out by Cleveland State, but look what Louisville just did to Arizona, did you want to see Cleveland State go down like that? The highly touted and over-hyped, Duke Blue Devils got ran out of Boston faster than the British on Thursday night. Gonzaga got sent packing before their suitcases were unpacked. Chalk, Chalk, and more Chalk! In the Final Four we want to see the best games possible. That means recruiting violating, head coach dominating, super-star freshman having, fierce programs. Connecticut, Louisville, Carolina, Oklahoma, let's get it on. KEEP IT REAL!

Destiny, is a new champion. With Tom Izzo and the Spartans dispatching of the 2008 National Champion Jayhawks in the final seconds of Friday nights game, it's a fact, we'll have a new title game. The Kansas Jayhawks followed the Memphis Tigers to an early trip home with their loss in the round of 16. But this is good for college basketball for a multitude of reasons, I'm keeping it to 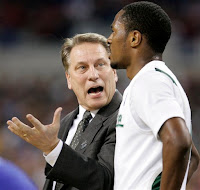 two: (1) As noted before, Mizzou moving on gives us validation of which conference is number two behind the Big East. The play of these Big 12 teams in the Tournament was impressive, the game that a young OSU team gave Pittsburgh was more than we could have asked for. Mizzou running Memphis off the court, and the domination displayed by Oklahoma, it's evident the Big 12 is pretty good. (2) Tom Izzo, doesn't need me to say it, but he's a top three coach in this country, nuff said. How many times are we going to watch Tom Izzo coach a team, with zero NBA players on it, deep into the tourney? Even if this team goes down to Louisville on Sunday, Tom Izzo has said something to everyone here. In case your wondering, the best coaches in the country are as follows: Rick Pitino, John Calipari, and Tom Izzo. KEEP IT REAL!

MY FINAL FOUR: While the rest of my bracket hasn't exactly panned out, I was heavy on chalk and picked Villanova, Carolina, and Louisville to all meet in the Final Four. Memphis was of course my other Final Four squad, but there out now. Connecticut will replace them and there you have it. Because I choose Carolina in the beginning I'm sticking with them, but I could see them losing to the Sooners. Pittsburgh v. 'Nova is a toss up, the Panthers haven't played a complete game in this tournament, but they have won three straight. I like 'Nova and they are my tournament sleeper, so I'm sticking with them. Connecticut is focused, they have way more talent than every team in this tournament, and turns out they just didn't match up against Pittsburgh in the regular season. Finally, Louisville is just filthy. The lapse against Siena is behind them, and they'll be in the Final Four. KEEP IT REAL!
Posted by Lynchy at Saturday, March 28, 2009