Not alot going on this week . . . my Boston Celtics are laying low with Rondo and Garnett on the mend. The NCAA tournament is about to begin, so were going through sports rather quickly this week.

To be fair . . Red Sox closer Jonathan Papelbon, needs to CLAM IT! Manny Ramirez is a Dodger, everyone knows what happened last summer, this is 2009, nearly a month away from the opener, time to move on. Please, don't get me wrong, I'm the same guy who stuck up for Pedro when he threw a 100-year old Don 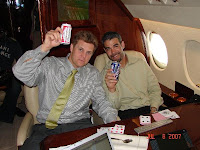 Zimmer to the ground, but when Jon Papelbon is releasing statements about "Manny being a cancer last summer" in Esquire magazine, I get a tad touchy. If you think he's disrupting the clubhouse and you don't step in, what does that say about you? Furthermore, where were these comments as it was going on? Forgive me if I'm wrong, but I didn't hear anyone from Jason Varitek to Josh Beckett saying a word publicly. It's over and done with, the player who helped bring more championships to the Boston Red Sox than Ted Williams, Johnny Pesky, and Carlton Fisk, combined, kissed any shot of his number being retired alongside theirs, goodbye. The kicker, he did it all for less than $1 million dollars. Keep It Real Jon! Let's close the book on this one.

The World Baseball Classic is not a bad idea. Like most things in this country, it's just poorly planned. For the past week or so I've been catching innings

here and there of the WBC. I've watched Canada play, Venezuela, U.S.A., Puerto Rico, Netherlands, Dominican Republic, among others. Yet, I've arrived at one conclusion: This thing has legs. It'll take some time before it gets to World Cup level, and I acknowledge that it may never be at that level, but it's just as fun. I have a few suggestions for Major League Baseball, what Bud Selig & Co. can do to change up what they've developed:

(1) No competing with spring training, it's just not smart and it's not fair to your loyal fans who have traveled to places like Fort Myers to see David Ortiz whack a couple homers in the sun and they end up catching Jeff Bailey batting fourth.

(2) The players have to be in better form to play. The Asian teams and South American teams are playing year round, and the North American clubs like the U.S. and Canada have a distinct disadvantage. Permanently shorten the MLB regular season, only owners would argue, and allow the players to continue playing post the postseason. That solves problem #1 of when to play it? Finally,

(3) Promote the foreign players. We already know Jason Bay of Canada, and Jose Reyes of the Dominican, we don't know whose pitching for the Netherlands, we don't know who's playing shortstop for team Aussie. If this is going to be a World game you have to embrace the leagues around the world and the stars that play in them.

Anyway Bud, that's my push to get you to shut down the conference tourneys and flip on the WBC this weekend. What? Who isn't excited for Cuba v. Japan @ 4:00 on Sunday? Two of our former WWII enemies squaring off in a friendly game of baseball! I'm excited. KEEP IT REAL! 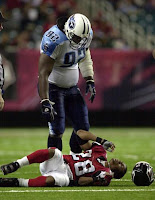 overreacting, but what ever happened to the day where a guy waited till he played with you for a couple months before he faced criminal time? I miss that day. If you have no idea what I'm talking about: from the Boston Herald . . "Washington Redskins defensive tackle Albert Haynesworth has been indicted on two misdemeanor traffic charges after a crash that seriously injured another driver in Nashville, Tenn." So I reiterate, what the hell are you giving a guy that kind of money for who has character issues? Adam Jones, Terrell Owens, Tank Johnson, Chris Henry, Cedric Benson . . the list goes on and on. I'm just tired of people with WAY more athletic talent than anyone I know, having an IQ similar to that of a 10 year old boy. Here's a thought: HIRE A 'FRIGGIN DRIVER. I know it's probably expensive but if you demand $41 million dollars . . . . I'm guessing you have money for it. KEEP IT REAL! The majority of millionaire athletes, are morons when it comes to staying out of trouble.

Check it out every Friday, sometimes in the morning (depending on the night before, what?!? I was up late watching the six overtime 'Cuse v. UConn game!) Sometimes in the late afternoon . . KEEP IT REAL!
Posted by Lynchy at Friday, March 13, 2009