The 1's Are In The Stable

We haven't written much about men's college basketball this year. In part because, well, how much do we really care about the regular season? However, that is neither here nor there, it's March, the conference tournaments are starting, and yep, Gonzaga has already punched their ticket.

On March 9th, the North Carolina Tar Heels currently sit at 27-3, which is good enough for a #1 ranking across the land. But wait, throughout this season spanning 17 weeks and 17 opportunities for a new #1, the Tar Heels aren't the only team that has spent time atop mountain. The AP has placed five different programs atop their top 25 since the beginning of the season. From Carolina, Duke, and Wake Forest to Connecticut and Pittsburgh, now back to Carolina, this season has been as exciting as any other in recent memory.

Before I release my Four #1 Seeds, pre-major conference tournament season, I have a disclaimer (or quick rant, whichever you prefer):

Disclaimer: I'm tired of ESPN and every other major sports outlet drinking the ACC kool-aid. From the Associated Press over ranking North Carolina after every win to ESPN and Dick Vitale slurping everything that comes out of Chapel Hill, I'm tired of this. Look, the Dukies and the Tar Heels have great

coaches and great programs, you can't deny that, but in the '08-'09 regular season, one conference is heads and shoulders above any other; The Big East. Currently, Connecticut, Louisville, and Pittsburgh, all Big East Schools, are in the top 5 in both the AP and ESPN/USA Today polls. So when Pitt drops UConn for the second straight time, who was the current #1, and the Tar Heels beat a Duke team that was ranked #7, how do they jump to #1 over Pittsburgh? ACC bias. When Carolina's Tyler Hansbrough wins the 2008 Naismith, while Kansas State's Michael Beasley averages more points and more rebounds than the Tar Heel forward, someone should ask the question, how is that? ACC bias. So, when your reading my selections for the #1 seeds, I'm tossing Carolina right out of the mix, if you want to hear about the Tar Heels chances, head to ESPN.Com, but hurry, the line gets long for Tar Heel kool-aid.

The Pittsburgh Panthers. Pitt should be the #1 team in the country right now, if I was picking, they would be. The current #2 in the Associated Press, is downright dangerous. Their 28-3 record headed into the vaunted Big

East Tournament includes an undefeated record in their home gym. Each of their three losses are road losses to top flight programs, Louisville, Villanova, and well, okay, so the Providence Friars aren't top flight, but they are good. The Panthers boast monster road wins in Storrs, Connecticut and a 16-point rout of Georgetown when they were ranked #8 in the country. Between super-big man, DeJuan Blair, averaging 16 points and 12 boards a night, and of course forward Sam young whose leading the team in scoring and second on the team in rebounds, the Panthers have the most dominant front line in college hoops. Like other top programs, Carolina and Louisville, a deep run in their conference tourney isn't needed to make them a #1 seed, no question.

The Oklahoma Sooners. So, the Sooners struggle without Blake Griffin. The '08 Memphis Tigers would have struggled without Derrick Rose. Like those Tigers, the

Sooners won't be playing without their superstar come tourney time. Oklahoma is the best team in the Big 12, and in my mind they are the best team west of the Mississippi. It wasn't till the Sooners played without Blake Griffin that they even hinted at struggling. (I'm excluding the loss in Arkansas, because everyone plays a clunker.) Pittsburgh against Providence, North Carolina against Boston College, you get the point. The 6'10" forward, Blake Griffin, averages 22 points and 14 boards a game. In a late November showdown at Purdue, the Sooners won their first road game of the season in overtime, Blake Griffin ripped down 21 rebounds and scored 18 points. Against 2008 tournament darlings, Davidson, and their super guard Stephen Curry, Blake Griffin led the Sooners to an early season victory scoring 25 points and 21 rebounds, on the same night that Stephen Curry led all scorers with 44 points. Blake Griffin will demand respect come tournament time, because of him, Oklahoma is a #1 seed.

The Louisville Cardinals. While I could see it happening, it won't. Three Big East schools are not getting top seeds, with that said, I'm putting Louisville in the top spot over Connecticut. If you fans in Storrs have a problem

with that, you could have beaten Pittsburgh, but you didn't. Back to the point, Louisville and Rick Pitino are poised and they are flying under the radar. The regular season Big East Champs boast victories against SIX top #25 ranked teams. They've won at tourney bound Syracuse, Villanova, and West Virginia. By far one of the deepest teams in the country, Louisville has no player averaging more than 14 points a night but three players averaging over 11 points per game. Finishing their tough Big East schedule with only two losses and finishing the season 26-5 is pretty damn good for Rick Pitino's squad. Senior forward, Terrance Williams, plays big in big games; 26 points against UConn, 24 points and 16 boards against the Irish, and 20 points in Morgantown to clinch the Big East. Louisville seemed vulnerable early but came on strong to round out the season. They will lock up a #1 with a good stretch in the tourney.

......I told you Carolina wasn't getting slurped here.

Finally, The Memphis Tigers. Yes, I understand they have just two wins against the RPI Top 50. And yes, losses against Xavier and Syracuse hurt their bid, especially when they play in a weak conference. However, the 2008 runners- 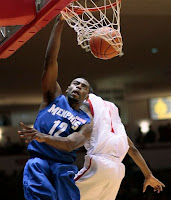 up haven't lost a contest since December 20th. They've defeated Tennessee at Knoxville, beaten Gonzaga in a tight one, and dropped a Cincinnati team when they were 10-3. The team which would lose Chris Douglas-Roberts, Joey Dorsey, and of course the #1 pick, Derrick Rose, returned to go 28-3 and more importantly 16-0 in Conference USA. The #2 team in C-USA, Tulsa, who finished the regular season 23-9 got dropped by 30 at the hands of Memphis just several weeks ago. Here's why I like Memphis as a #1: They are the Ohio State of college basketball, in the current system, wins are all that matter, it doesn't matter who they are against, it just matters that you have them. If Memphis plays in the Big East, maybe they have a slew of losses, but do you really want to be deprived of a John Calipari coached team in the Big Dance? After losing all those stars and without the big name school behind you, like Bill Self at Kansas, what Calipari has done is masterful. Freshman guard Tyreke Evans is awesome, he's averaged 17 points on the season and in their win at Cincy, Evans notched 14 points, 10 rebounds, and 8 assists, from a guy no one expected Coach Cal to be able to get anything out of. Memphis deserves a #1, especially more than North Carolina and ACC refs. BOOM!