Breaking Down The Bracket

Knock, Knock
Who's There?

Now that I've gotten that out of my system . . I'm breaking down the 2009 NCAA Men's Basketball tournament, and the Women's.

UConn destroys everybody, We hate Gino Auriemma even more than we used to, and that's all I have to say about the Women's Tourney. No disrespect.

Three Big East monsters, and Tobacco Road's finest. Pittsburgh, Connecticut, Louisville, and North Carolina are the four 2009 number one seeds. A couple thoughts regarding these seeds:

(1) The 31-3, Conference USA Champion, Memphis Tigers, aren't a #1 seed. North Carolina exited the ACC tournament earlier than expected, and questions surround the health of guard Ty Lawson. Connecticut also exited the Big East tournament earlier than expected, their down Jerome Dyson and won't be getting him back. What did John Calipari's Memphis Tigers do? Win each of the last 25 games they played, which included a 25-point victory against a 20 win Tulsa squad in their conference tournament championship game. It's okay though, the selection committee is making a point to Memphis; Win the tough out of conference games you scheduled, or move to a power conference. If Memphis gets knocked out early, the committee is justified, if they go deep and knock off a #1, they'll earn respect.

(2) Louisville forced the committee to make them The #1 seed in the entire tournament. Pittsburgh, Connecticut, and Carolina all got bounced from their conference tournaments early. Louisville rolled up 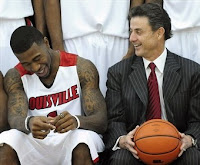 Providence, Villanova, and Syracuse all by ten points or more en route to becoming the Big East Tournament Champs. Rick Pitino has the Cardinals ready for a deep run and hopefully a national title. If Carolina had won the ACC tourney, you can bet it wouldn't have mattered if Louisville beat every team by 30 points, they'd have given the top honor to Carolina. Luckily for my blood pressure, that didn't happen and Carolina disappointed their legions of misguided fans, Thank You. As the #1 overall, Louisville has the easiest of roads to the Final Four. The only sleepers in their Midwest Region are a very good Michigan State team who shows vulnerability and a West Virginia program that they beat in Morgantown just recently.

Northern Iowa and Western Kentucky are #12 seeds, not Arizona and Wisconsin. Two of the four number twelves play in big time conferences that sent 10 additional teams into the field of sixty-four. So, when one of these teams 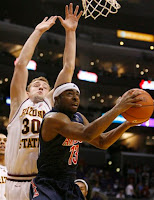 knock off a #5 seed, don't be shocked. Arizona has wins against Gonzaga a #4 seed, Kansas a #3 seed, UCLA a #6 seed, USC a #10 seed, and Washington a #4 seed. While they are a 19-13 team that were definitely on the bubble, that resume is impressive and a victory against the five seed, Utah, wouldn't be an upset. Wisconsin on the other hand has a very tough Florida State team awaiting them, but they've been preparing for this with their rigorous Big 10 schedule. The Badgers beat Michigan a #10 seed, Illinois a #5 seed, Ohio State a #8 seed, and while Penn State isn't in the tourney, it's because they have two losses to none other than the those Badgers that there out. When the ACC tourney runners-up, the Seminoles, drop their tourney opener to Wisconsin, remember, Wisconsin isn't REALLY a #12 seed.

There is something missing here. It's Davidson and sensational guard, Stephen Curry. The Southern Conference Champion Wildcats finished the regular season 26-7. They were got bumped off in their conference tournament and

lost the automatic bid they would have received if they'd won. That bid went to Chattanooga, who Davidson defeated twice in the regular season by an average of around 13 points, and who will be promptly stomped on by UConn in the first round. Davidson played Duke, Oklahoma, Purdue, NC State, West Virginia, and Butler. So I'm going to feel safe in saying, they were challenged. Furthermore, you know what one of the major problems in college hoops is? Consistency. You can't identify with the players because each year they leave earlier and earlier. Well my friends, we had Steph Curry coming back for another season, and the same guy who we loved watching in 2008, led his team to 25+ wins and averaged nearly 29 points a night in the '09 regular season. For one year, I could have been okay with one of those schools from a power conference being left off in favor of a guy and a team we know and loved from the season before. This tournament needed Steph Curry and the Davidson Wildcats.

Unlucky #7's. Cal draws Maryland, Clemson draws Michigan, Boston College draws USC, and Texas draws Minnesota. It is very possible that those #10's could whack every one of the #7's they drew. Maryland is a inconsistent, but 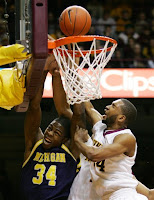 dangerous. Beat the Tar Heels but lost to Morgan State, get my point? Clemson meets a Michigan team that is coming off recent wins against tournament teams Purdue and Minnesota, they scare some teams. Boston College is going into the eyes of March after taking Duke to the wire in the ACC tourney. The young Eagles that knocked off Carolina, Duke, and Florida State in the regular season draw a USC team hot off a 5-game winning streak that resulted in the PAC-10 tourney champs. Lastly, the Texas Longhorns will be playing Tubby Smith and his Golden Gophers that dropped #1 seeded Louisville back in December. If you forced my hand to pick which of those sevens would survive, I'd be forced to put California and Clemson into the next round. Yep, I'm picking against my Boston College Eagles, and I don't want to discuss it any more.

I loved Xavier last year, they didn't lose till field went from eight to four. This year, the team I see sneaking up on people is also a #3 seed. Jay Wright and the Villanova Wildcats. Wright and his Wildcats finished off the final 13

games of the season 11-2. That 11-2 mark includes wins against Pittsburgh, Providence, and Marquette. Throughout this season they've lost several very close games including a 1-point loss to Louisville, 2-point loss to Georgetown, and a 6-point loss in Storrs, Connecticut back in late January. Led by Junior guard, Scottie Reynolds (16 ppg and 4 apg) and 6'8" Senior forward, Dante Cunningham (16 ppg and 7 rpg) Villanova has veteran leadership which always does well in this tournament. Villanova opens up with Patriot League Champs, American University, and would be aiming at a possible matchup with Duke if the Blue Devils can survive. I'll be in attendance for a Duke v. Nova matchup in the East Region at TD Banknorth Garden, and let me tell you, I hate Duke. Look for Jay Wright to take his program deep in 2009.

I love former UMass head coach, Travis Ford, leading Oklahoma State into the 2009 NCAA Tournament. However, expecting them to knock off Pittsburgh in the second game of the tourney is too much to ask.

Don't be stunned when the Big East drops a few first round games. Syracuse played their butt off in the Big East Tourney, they may be spent. As much as I love Marquette, they are different without former coach and current Hoosier, Tom Crean.

Portland State upsetting Xavier wouldn't shock me. On that note, neither would Akron dropping Gonzaga in the first round and Cleveland State giving a shock to Wake Forest. Not all the chalk will advance.

Don't sleep on Bob Huggins and West Virginia, I've seen that team play and I would love to see them advance to play a Michigan State or drop a Kansas in the second round.

Louisville - Pitino has the team to get them there, they are deadly.
Memphis - Just wait and see.
Villanova - Stuns Pittsburgh in Boston.
North Carolina - Look at the South Region; Please.