Ah, how we forget. The NCAA Men's Basketball Tournament, otherwise known as March Madness, is the preeminent sports showcase in this country. Not the Super Bowl, the World Series, or the Stanley Cup Playoffs, March Madness gives you everything those do, and much more. The 2009 version, hasn't disappointed. The tourney is just four days old and it's given us everything we've asked for:

Tough break, sorry you had to leave so early. To the Oklahoma State Cowboys and the Siena Saints. Two programs who had monster round 1 victories, against Tennessee and Ohio State respectively, only to be knocked out by the top dog in round 2. First up, Siena, many may think it isn't an upset, I'm one of those many, even with that said, anytime you can send the Buckeyes back to Columbus after a double-overtime thriller, I'm all in. The regular season MAAC champions, led by double-doubles from both forwards Ryan Rossiter and Alex Franklin, stunned the Buckeye faithful in round one. A three-pointer from guard Ronald Moore dropped the

Buckeyes in the second overtime. After their round one victory, the Saints gave Louisville a scare that had the top seeded Cardinals on the ropes. Junior guard, Edwin Ubiles had his second straight 20+ point game of the tourney. The Siena defense pressured Pitino's squad into 17 turnovers. Unfortunately, 4-year veteran, Terrance Williams of Louisville was too much for the Saints, finishing with 24 points and 15 rebounds. Hats off to the Saints, almost knocking off the top overall seed is good enough. Next, Travis Ford and his Oklahoma State Cowboys. 49-49 heading into the half, the Cowboys had the Sweet 16 in their sights and they'd have to knock off the East Regions top seed, Pittsburgh, to do so. However, the team that finished 5th in the Big 12 during the regular season didn't have enough to overcome Pittsburgh's super senior, Sam Young. Young went 12 of 20 from the field and scored 32 points to carry the Panthers into the Sweet 16. The smaller Cowboy squad couldn't stop the bigs of Pittsburgh and ended up losing 84-76. But today, we should recognize not only the Saints of Siena but also the Cowboys of Oklahoma State, after watching UConn tear through Texas A&M in the second round, these teams came out and took #1 seeds to the brink.

While we're mentioning them, how 'bout those Huskies? Two games into the tournament, Connecticut is winning by an average of 41 points per game. Did I mention their down a junior guard, Jerome Dyson, who was averaging 13 points and 5

boards a game before he went down with a torn lateral meniscus in his right knee? On Saturday afternoon, UConn made Texas A&M, a 24-win team, look like they belonged playing high school ball. Forward, Jeff Adrien and guard, A.J. Price turned in 50 points, 13 rebounds, and 9 assists, all while shooting 19 for 32 from the floor. All that talk about UConn being the most likely #1 to fall, is out the door as fast as it came in. Their head coach, Jim Calhoun, having medical problems, what medical problems? Allow me to put it this way; I fear for the safety of the Purdue Boilermakers. Junior 7-footer, Hasheem Thabeet, will be on four days rest after only playing 20 minutes in Saturday afternoons game. Even still, the Huskies still out rebounded Texas A&M by 14 rebounds. Anyone who watched that Huskie team play Saturday arrived at the same sentiment, whoa!

Under the radar, lie the Oklahoma Sooners. They have the best player in the country, Blake Griffin, and don't give me any of that Tyler Hansbrough garbage. As quiet as we are on Griffin, we are on the Sooners. Two wins into the tourney and Blake Griffin has scored 61 points to go along with his 30 rebounds, all

the while going 25 of 32 from the field. Maybe we haven't been paying attention to the Sooners after victories against Morgan State and the Wolverines of Michigan, but if he continues on this pace, he'll do it going through 'Cuse, and then you'll pay attention. This is the same team and superstar that upstaged Stephen Curry's 44 point performance, by pulling down 20+ boards to go with his 25 points back in November. The same American University team that gave Villanova all they could handle, lost to Blake Griffin's Sooners by 29 points earlier this season, Griffin threw down a healthy 24 and 18. The Oklahoma Sooners had 8+ wins against tournament teams during their regular season, Griffin averaged 23 and 15 a night, this isn't a team to be fooled with. I'd be careful if I was wearing Orange.

Maryland and UCLA, that was fun. After managing their way out of the first round, both the Terrapins and Bruins had no idea what lay in store for them. Last years runners-up, the Memphis Tigers, jumped out to a 20-point lead by halftime over the Terrapins. Jay Wright's Villanova squad pushed a 13-point

halftime lead to a 20-point win over UCLA. That's all she wrote for Ben Howland and Gary Willams. It's about time the rest of the country jump on board with Memphis. If there was ever a coach to play the "their against us" card, it's John Calipari, if there was ever a team that would play that card better than anyone else, it's the Memphis Tigers. The Tigers had five players scoring in double digits, including super freshman guard, Tyreke Evans, who dropped 19 points on an over matched Greivis Vasquez. Monster duo, Dozier and Taggert, turned in 31 points and 18 rebounds. Do not sleep on the Memphis Tigers, they are as advertised. As for Villanova, you know about Pitt, UConn, Louisville, and 'Cuse, don't forget about 'Nova, it's a warning sign. The team with no "true" big man, 'Nova, out rebounded UCLA by 13 boards, including 21 from Dante Cunningham and Dwayne Anderson. The Wildcat bench outscored UCLA's bench to the tune of 29-12, led by guard Corey Stokes, who was 4 of 9 from behind the arc. Not even the refs will be able to save Duke from Villanova when they arrive in Boston for the East Regional.

Does Arizona still not deserve to be in The Tourney? The Arizona Wildcats would put a hurting on St. Mary's, so all of the St. Mary's cheering section, including you Dick Vitale, clam it. The team that beat fellow Sweet 16 teams, Gonzaga and Kansas, back in December, is back. 'Zona laid 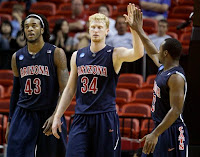 the wood to #5 seed Utah in the first round, 84-71. Then followed that performance up with a 14-victory that sent Cleveland State right back where they belong, in Ohio. Let's remove the #12 from Arizona, because they are not a #12 seed, Western Kentucky and Northern Iowa were #12 seeds, not Arizona. Sure, losing 4 of 5 heading into the selection show doesn't help your campaign. However, in 2009 this Arizona Wildcat team beat the tournament likes of Southern California, UCLA, Washington, Gonzaga, and Kansas, take that St. Mary's. Between Chase Budinger, Jordan Hill, and electric guard, Nic Wise, would you be all that shocked if they knocked off Louisville? Wise has gone for 20+ in each of the last two games, Jordan Hill is averaging 11 boards a game, these Wildcats are just as dangerous as Siena was for the top seeded Louisville. KNOW THAT!

Finally, so you know the dogs I have in these fights.

Admittedly, I had OSU upsetting Pitt. 'Nova will reach the Final Four. The refs and Ty Lawson are too much for Gonzaga and Oklahoma. Connecticut is very good, but they can have lapses, yes, Purdue. Memphis is far too good not to be part of the round of four. Rock Chalk . . Louisville over Kansas.

And you were impressed by a Santonio Holmes' catch, and the Phillies ace, Cole Hamels, Puhhhhlease.
Posted by Lynchy at Monday, March 23, 2009