I went through an entire college football season watching the Boston College fans at Alumni Stadium in Chestnut Hill, in a word, depressing. I love the games, the tailgating, the stadium, but I want the fans to be into the game more than the event. While attempting to plan my trip next fall to Texas Stadium to see my Cowboys play I got to thinking, and no I didn't hurt myself. What places would I want to be? I preface this by saying I could only see one SEC team, because I'd like to seem em' all. Here is a short list of the top 5 places I want to witness pigskin thrown around the lot.

Rose Bowl @ Pasadena, California: Ever since the Dallas Cowboys played in the 1992 Super Bowl I've wanted to w 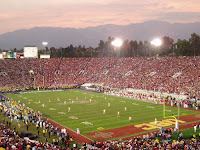 atch a game in Pasadena. For years I have seen Rose Bowl contests with USC playing against a completely soft Big 10 opponent and rabid Trojan supporters cheering on the maroon and gold. The Stadium is massive and who wouldn't want to see the Rose Bowl at least once during their lifetime. I've always wondered why the NFL never went back down to So. Cal for a Super Bowl, far more fun to watch than indoors at the Super Dome, which the NFL can't seem to get enough of. Strike up the Trojan Marching Band and give me the sword!


Qwest Field @ Seattle, Washington: I've mentioned it before and I'll say it again, the loudest and most exciting stadium to watch on television is in Seattle. The fans don't stop from the beginning of the game till the end, they account for numerous delay of game penalties and confusion on opposing offenses. They wear electric green and blue and are referred to as "the twelve player" because of the impact they have during the game. We forget about everything in the Pacific Northwest, after Cobain there wasn't much coming out other than Starbucks. Under the rain and mist of Qwest Field these fans root for the Seahawks and have had the opportunity to go to a Super Bowl to cheer on their team. The only NFL stadium among my top 5 is Qwest Field, if you haven't noticed it you need to.

Michigan Stadium (The Big House) @ Ann Arbor, Michigan: It was either Ann Arbor or Columbus which would get the nod in my top 5 and after Ohio States choke job

for the second straight year I'm going with the "Maize & Blue." Sure they lost to App. State this year at home, but you still would have been able to see the most amazing upset in NCAA Division 1 football history. When I was a kid I used to watch Michigan games on television religiously, for the most part because they were always on, but the likes of Charles Woodson and Desmond Howard was another significant reason. I had a high school teacher who used to tell us about how packed "The Big House" would get on a Saturday afternoon, despite the fact that she was errr shall we say, easy on the eyes, she still got me wicked excited about the possibility of visiting Ann Arbor in the fall. Give me that Ohio State v. Michigan game at the Big House and I would die a happy man.
Notre Dame Stadium @ South Bend, Indiana: How would this not make the list? I hated the movie Rudy, but I still got chills when he panned the stadium as he first walked in. 100,000 screaming Irish Catholics in front of Touchdown Jesus? What could be better? That is like a regular party with my family less 99,980 people. I had plans to visit Texas Stadium which fell through this fall, the same weekend as Boston College was playing Notre Dame at South Bend and I regret not making the trek to Indiana, yes that last sentence was real, I want to visit INDIANA. Thousands of fans screaming for the Irish, somewhere I really would want to to visit. No they won't be chanting Lynchy! Lynchy! Lynchy! but still, it'll be fun.
Ben Hill Griffin Stadium (The Swamp) @ Gainesville, Florida: This one is a new one for me but 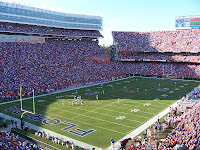 HAD to be on the list. I had a friend in college who was a die hard Gator fan, I think he even paint shopped his head onto a fans body who was giving Tebow a high five after the Gators last home victory, that's hardcore. Other than the stupid Indian noise that the Florida State fans chant there is no single more annoying motion in professional or collegiate sports than the "CHOMPING MOTION" that the Gator fans make with their arms while rooting for Florida, so I WANT TO BE A PART OF THAT!!!!! The Swamp is a sea of Orange and Blue, the walls painted Orange the fans faces painted Orange, the city of Gainesville is the University of Florida. Lets be honest though, I'm sure the lady gators are pretty good looking, being in Florida and all. After visiting Seattle, Ann Arbor, and South Bend I'm going to need some warm weather cheering. LYNCHYRIGHTNOW.Com visits 'THE SWAMP.' Fall 2008
Honorable Mention
Raymond James Stadium @ Tampa Bay, Florida: Normally I would HATE this type of stadium. New commercial stadiums filled with gimmicks to bring the non-rabid fan into the action, as if the show on the field isn't enough. You know what gimmicks are meant for? The AHL and Minor League Baseball. This stadium features a pirate ship in the end zone and the sounding of faux canons each time the Bucs score. Pictures of pirate ships litter the walls 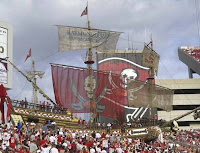 and the atmosphere is actually pretty entertaining, so I suppose it succeeds at its core purpose. I can't stand where the L.A. Angels play because of the same type of things but for some reason Raymond James attracts me.
Heinz Field @ Pittsburgh, Pennsylvania: I dislike the Steelers, I'm a Cowboys fan what do you expect? The inventor of the towel waving, these fans are rabid, rugged, and bad ass. I actually really want to go see a game there, my girlfriend says great things about how clean the city is, she visited and actually sat through a Pirates game two years ago. But I've never seen a stadium where you can't even identify ANY of the other teams fans it seems like that every time I watch a Steeler game. I wouldn't wear the Black & Gold you can bet on that, but I certaintly would love to watch a game from the yellow seats, Who doesn't love Theresa Heinz-Kerry.
So you don't think I forgot about them, I'm in no way sitting in Green Bay, Wisconsin in the freezing cold with fans that wear foam cheese on their head. I love the Cowboys, but want nothing to do with 'Hook Em' Horns' and no thanks on the 'Dog Pound' in Cleveland.
Posted by Lynchy at Wednesday, January 09, 2008