I was pooping in my diapers and eating food that a dog would stick his nose up at when the Boston Celtics last won championships in 83' & 86', in the 01'-02' season my friends and I took the T into the building formerly known as "The Fleet" to witness the eastern conference championship and see our Celtics lose to the New Jersey Nets. Although we got to see one of the greatest comebacks of my lifetime (Celts stormed back down by 21 to win game 3 and take a 2-1 series lead, my buddy Mike took a ceiling tile out of the Fleet, it was bedlam) that is the extent of the success that I have witnessed as a Celtics fan.

Sidenote: When people say "I've been cheering for them since I was a baby" it's bullsh*t because you don't even know your own name till your like 5 and true fan loyalty only hits you when your between the ages of 8-10. Back to what I was saying . . . .

I thought that my Celtics fandom would go unrewarded and what else was I to think? Paul Pierce was aging before my eyes, Antoine had already been brought back for round 2, and the Celtics had pretty much traded or cut every draft pick they'd had since Rick Pitino. To Mention (the phrase "n 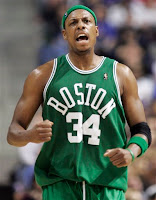 ot to mention" needs to go, it is always followed by what you WEREN'T GOING TO MENTION) we had just suffered one of the most rediculous seasons in the history of the team, No Oden or Durant, Red passed away, and Gerald Green was the future of this team. Mike Vick was looking at a brigher future.

7 Months later the wounds on the wrists from lottery night have healed, i'm officially off the edge of the cliff, The Celtics are the BEST, yes I said BEST team in the NBA. I wrote about it after the first few weeks of the season, Spurs v. Celts Finals Preview, and I attacked Marc Stein for not giving the C's enough credit two weeks ago. Last night my point was proven, you should have been watching the C's game and not that Steelers & Jaguars crapfest.

For the first time since he has been coaching the Celtics I felt like Doc had the ability to coach, proving the point, your only as good as the players you have. Inputting Tony Allen into the lineup for the Alien known as Rondo for defensive purposes in the 4th quarter, then subsequently taki

ng him out to allow Rondo to create on the offensive end. GREAT MOVE. Noticing that Perkins is neither quick enough on defense or smart enough on offense and leaving Glen Davis in the game, which we'll get to in a second. The Celtics are off to a 29-3 start and they have beaten Utah @ their place, Detroit @ their place, and revenged their earlier losses to Cleveland & Orlando. I don't just believe it was ALL THE PLAYERS, Doc did have something to do with this and I applaud him.

* Keep in mind there was bets being placed on what day of the week he was going to be fired just a year ago.

Last night, after months of ripping the size of Glen Davis, and how he would be out of the league in two years, I was again proved wrong. He did the #1 thing that I WISH big men in basketball would do fro

m the time they were 5 years old till the time they retired from the nba, DON'T PUT THE BALL ON THE FLOOR. Davis worked on Detroit for the entire fourth quarter, scored the game high 20 points, 16 of them in the final frame. He made key rebounds, passed the ball, hit free throws, the only thing he didn't do was punch Rasheed Wallace in the face (secretly my dream). It is the efforts of players like Glen Davis, Eddie House, and James Posey along with Rondo that will allow this team to become a "Championship" team. Like with San Antonio, you know what Duncan, Parker, and Ginobli will give you, what will the "other" guys give you. Ask Michael Jordan if he could have won those championships without Steve Kerr, Craig Hodges, Bill Cartwright, and B.J. Armstrong.