I guess I could have seen this one coming, Dallas passes up chance after chance to score and the Giants get a ticket to the NFC Championship. I couldn't be more disappointed in the Cowboys, dropped balls, stupid penalties, and a poor performance from the offensive line. The most depressing thing about that game was the fact that they DID run the ball and run the ball well, there were opportunities that were missed, and I've now aged another 5 years because of 1 Sunday afternoon. Ugh, let alone that it is snowing outside and I like precipitation about as much as I like Rodney Harrison.

New England softly placed their foot on the throat of Jacksonville directly after halftime, nice try though. They'll "dink-and-dunk" you to death if you double Randy over the top, if you pressure Brady he'll simply release the ball quicker and you'll be watching the Moss sprinting for six, and can Kevin Faulk get some respect? The man is in his 8th or 9th season with the Pats and never gets hurt, he has seen Antoine Smith, Corey Dillion, and Lawrence Maroney take the load while he quietly kills you with key 6 to 7 yard gains. It is guys like Kevin Faulk that are the glue of this Patriots Dynasty. My friend Dan said it best, "You don't like the Patriots, but you respect them."

The Packers spotted the Seahawks 14 points then promptly outscored them 42-6 the rest of the way. Favre wasn't afraid to throw the ball in the snow and wind at Lambeau and Ryan Grant proved that he is for real. The most impressive thing of the day wasn't the score though, in my mind the offensive line stifling the Seahawks pass rush was the difference maker. When the Giants roll into Wisconsin next week expect to see the same type of battles. I thought the Cowboys offensive line looked tired and slow in the second half after going all out the first half, the Packers offensive line just got better and quicker. While I don't think Brett can win the Super Bowl, to get them there would be almost as impressive. 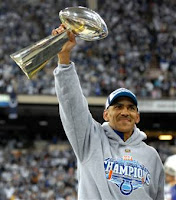 I can't stand the Bolts, I don't respect them, I don't cheer for them, and I sure as shit won't back them in the AFC Championship. Shawn Merriman is no Ray Lewis and Norv Turner HAS to cost these guys 1 playoff game right? If you would have told me that Billy Volek would lead the Chargers to a game winning touchdown, I'd tell you to go sh*t in a hat. Then again I thought the Seahawks would upset the Packers and the Cowboys would roll. The Colts have just been too injured this season and as much as I would have liked to see Dungy and Manning next week in Foxboro, it just wasn't going to happen. I will say this though Tony Dungy has always been a terrific coach and I respect him alot more than I respect alot of people in the NFL.

I want to come out and say it now so YOU all understand that I DO think the New England Patriots will win their fourth Super Bowl and I think they'll play the Green Bay Packers. This is the match up that the NFL wanted and this is what we will see. I'm also going to include this last thing, if for any reason the Pats don't win at home next week AND in the Super Bowl two weeks later the entire season will be a disappointment anyone who tells you different is softening the blow for themselves in the event they actually do lose.
Posted by Lynchy at Monday, January 14, 2008