I love the NFL Draft, and now that my Cowboys have gone on an early vacation my NFL attention goes to the Draft and all things mock . . . .
1. Miami Dolphins - I was and am still all over LSU DT Glenn Dorsey as the #1 selection, I think that Ireland & Parcells would want nothing more than to make that defense younger and what better way to do it right? Dorsey is extremely strong and athletic for a de 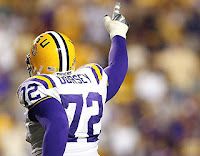 fensive tackle. If you had to design a prototype for the NFL position, Dorsey is what you would come up with. He is a Wilfork type DT who plugs the whole and demands a double team. His speed off the ball will give him the ability to put pressure on the quarterback and force them outside the pocket where those older ends will be allowed to make plays. In the AFC East you don't necessarily have the most "mobile" quarterbacks in Trent Edwards, Tom Brady, and Kellen Clemens so Dorsey's' impact would be nothing short of immediate. Jeff Ireland likes defense and so does Bill Parcells. The Dolphins have the opportunity to right the ship this year and pick the surest thing that sure thing is most definitely Glenn Dorsey. ( my buddy Roche actually likes Matt Ryan as the #1 to the Dolphins, I don't exactly disagree with him either, Ryan had a spectacular senior season at Boston College and by far looks like the most "Pro Ready" college prospect in 2008. I think that if the Dolphins hadn't spent a second round choice on John Beck last season then Parcells would feel more at ease with selecting Ryan.)
2. St. Louis Rams - 10 years ago the St. Louis Rams made Buckeye left tackle, Orlando Pace, the #1 o 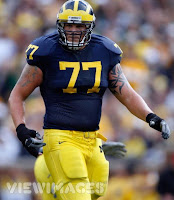 verall pick. Pace who was and has been the cornerstone of the St. Louis Rams during their Super Bowl seasons. Pace is on the down slope spending the majority of this past season on the IR. With their rushing attack unable to produce much this year due to the injuries of Pace and the rest of the offensive line it has become eminent that they need to bulk up their trenches to allow running back Stephen Jackson to have the kind of year that fantasy owners had dreamed of. This draft has that type of player, Michigans' Jake Long, at 6'7" and 305 lbs. Long is that a giant of an offensive tackle. In 2007 he was considered equal to if not better than former Wisconsin tackle and now Browns standout tackle, Joe Thomas. Long is quick and has the ability to both pass and run block with massive strength. With a perennial hall of famer their to coach Long and playing in that veteran offense he would be able to develop into the lineman that they need to support their passing game as well.

3. (subject to change) Atlanta Falcons - The Atlanta Falcons aren't locked into this spot just yet, because the Falcons, Raiders, and Chiefs all shared the same record and strength of schedule they could end up picking as low as 5th, to be determined. In the event that B 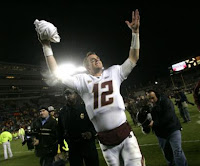 ill Parcells passes on Boston College QB, Matt Ryan, he should go ahead and call Ludacris because he is headed to Hotlanta. Of the top 5 teams selecting in this years NFL Draft they are the only ones who are in desperate need of stability at the QB position. This site has well documented my man love for the BC signal caller and it is well deserved, with sub-par receivers and an anemic backfield Ryan still was able to step to the forefront of QB draft prospects and leap Louisville's Brian Brohm. The leadership that Ryan displayed this year was impressive, a new coaching staff, and new offensive system allowed Ryan to prove his intelligence and ability to learn on the job. Under 1st year head coach, Jeff Jagodzinski, Ryan developed a knack for what an NFL system and coach is like. Here is the bottom line, Atlanta needs a stable, smart and talented QB to build its franchise back up to where it was several years ago. Matt Ryan has NFL size, poise, and is clearly capable of being that guy, as one site says "They don't call him Matty Ice for nothing". Arthur Blank better just hope Parcells doesn't think Ryan is the #1 overall or Atlanta will be looking at Chris Redman behind center.

4. Oakland Raiders - Al Davis is locked into either the 3rd or 4th pick because Oakland holds the tiebreaker over Kansas City for finishing last in the AFC West. I have been very curious about t

his pick since it became clear Oakland would be selecting in the top 5. With Arkansas running back, Darren McFadden sitting in the green room do the Raiders think he is the next Adrian Peterson? The ability to develop a core of offensive weapons in JaMarcus Russell and McFadden may be enticing to Raiders brass. I don't believe they pull that trigger though, I believe they go surer thing and select Howie's boy, Virginia DE, Chris Long. Long is said to have tremendous quickness and the ability to play in several defensive schemes, under the tutelage of both is hall of famer father, and former Jets head coach, Al Groh, Long became a monster this past season in the ACC. If not for the play of Matt Ryan, Chris Long may have been selected as the conference player of the year. Al Davis loves this kid, he is Howies' boy and the Raiders love that type of story, especially for a kid who is worth the hype. An All-American at 6'4 and 280 pounds Chris Long is scary quick and with the retirement to defensive tackle Warren Sapp, Long will step into the Raiders defense and have an immediate impact.

5. Kansas City Chiefs - This pick is a compelling one to say the least. Where my entire preview could turn out to be completely wrong it would go something like this:

This scenario isn't likely if you ask me, but it does display how EVERYTHING can change and change quickly especially when your looking for Parcells to do the obvious thing. The Chiefs could still improve their offensive line with a number of solid O-Lineman still available but they probably believe that Jake Long won't be and everyone else would be selected TOO high. You don't gamble with an undersized Vernon Gohlston DE, Ohio State, and even though it may be a little to high for him, the Chiefs have to take Boise States' Ryan Clady. The Bronco offensive tackle may be a lock if what I just wrote actually happens and Long isn't available. He isn't a top 5 selection in most years but with the Chiefs needing offensive line help desperately and still looking to salvage their run game he may be their only option. Claddy is definitely more than serviceable and has anchored the Boise St. attack for the past three years, not the overwhelming size that Jake Long has but still large and in charge. Chiefs go Clady and sign the thank you note with the Falcons and Raiders to send to the Jets, who gift wrapped their way out of the top 5 by achieving a meaningless week 17 win.