I loved the response from last weeks beginning to my mock draft, keep em' coming you said so here you go . . ..

6. New York Jets - If the top 5 selections go as I wrote last week the New York Jets would have no other option but to select Arkansas RB, Darren McFadden. If th 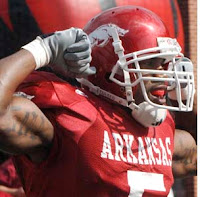 e only reason for selecting McFadden was to keep him away from division rival New England, I'd do it. In a two-back system that included Laurence Maroney, the Patriots backfield would be darn near unstoppable. With the Jets having Thomas Jones & then adding McFadden it would allow some pressure off of Kellen Clemens and give him time to become an actual passer, something Pennington could never get right. McFadden has all-world potential perhaps even more so than last year rookie sensation, Adrian Peterson. Generally I follow the "Ki-Jana Carter" rule of thumb, if you think he's to good to be true, he probably is. You also don't want to be that team that allows New England to rip off another 19 win season. Jets take McFadden w/ fingers crossed. (this is as high as Ohio St. linebacker/defensive end Vernon Gholston goes, an obvious improvement on defense Gholston would give them youth and athleticism. With McFadden off the board the Jets would most likely choose Gholston.) 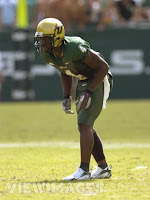 far could get New England to keep this pick. Keith Rivers and Dan Connor won't be playing in Foxboro, the "hoodie" doesn't draft linebackers to play in his scheme, even if they are from western Pennsylvania. Animals kid, linebacker James Laurinaitis decided to play another year in Columbus, Ohio so he's out. Another Buckeye standout, CB Malcolm Jenkins also decided to stay and play out his senior campaign rather than join one of the best underclassmen classes to ever enter the draft, so he's out. The Patriots will need help in the defensive backfield due to free agency, old age, and lack of usable HGH, sorry Rodney. With Asante Samuel playing out his last year in New England and set to make "Champ Bailey" like dollars he too will be hitting the bricks. Do I think the Pats would choose THIS year to use that top 10 pick on a strong rookie DB? No. If they determine that a first round DB, either Kansas' Aqib Talib or Mike Jenkins out of South Florida is the guy they covet then most likely one or the other will be there a few picks later, allowing New England to get out of the top 10 and more importantly allowing them to not pay top 10 money for a rookie corner. Traded.

8. Baltimore Ravens - Welcome to the beltway Mr. Brohm. I'd like to assume with Brian Billick out in Baltimore, that the Kyle Boeller project will continue somewhere else, Gruden loves quarterbacks right? John Harbaugh isn't exactly in the position to start off tru 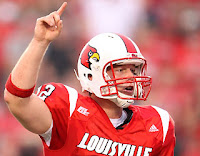 sting Kyle Boeller, so maybe a new quarterback is the primary need. Starting from scratch, with a quarterback he can coach up, would be ideal. Brohm is clearly one of the top 2 quarterbacks in this years NFL draft, he possesses NFL size at 6'4" and has tremendous arm strength. Brohms numbers didn't miss a beat in 2007 despite starting over with a new head coach after the departure of turncoat Bobby Petrino. His senior campaign produced a 4,000 yard passing season to go along with 30 touchdown passes. With few free agents on their roster this year it will allow the Ravens to go out and spend some money on a possible veteran o-lineman and wide out, to improve Brohms chances. The uncertainty surrounding the play of Hurricane Willis McGahee is certaintly troubling but with the offense having more of a focus on him and coach Harbaugh easing the young rookie into the NFL while still having 2006 Heisman Trophy winner, Troy Smith in Baltimore to experiment with may allow Brohm some time to be acclimated to the NFL. Widely considered the most NFL ready quarterback in the draft, Brohm has a huge upside. He lacks the poise and natural leadership of Matt Ryan but makes up for it in his god giving talents. With the #8 selection in the draft, Baltimore takes Louisville QB, Brian Brohm.

9. Cincinnati Bengals - I always go defensive line over linebackers (see the 07' New York Giants) Cincy is in the 17th year of needing a good defense so you go most likely to be solid here. USC, DT Sedr 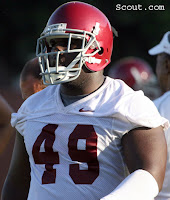 ick Ellis occupies this spot. Here is a guy who is about as dominate as Glenn Dorsey, without the hype. Strange if you think about it, considering he played for the best college football program in the country. All reports mention Ellis as being slightly undersized . . . . . . . at 6'1 and 310. I'm just saying where I come from 6'1, 310 is NOT UNDERSIZED. Here is the bottom line on Sedrick Ellis, forget the fact that he is a man child with 29 solo tackles this year, and forget that he started for the best defense in the country, and forget that he started for them each of the last 3 seasons, don't forget this, when SC comes calling the BEST sign on. Give me Sedrick Ellis at 310 tearing it up in a 3-4 and I'll be smiling.

10. New Orleans Saints - Come on baby? Did you think you were getting out of the top 10 without seeing someone from "the U?" Waaaaaaaaaaaait. Before I tell you who I'd select if i was on the board with the #10 pick and I had the worst secondary in the NFL I need to say this:

Do you even know who is trading up into the top 10 to take New Englands pick? They want to improve their secondary and you have to guarantee them 1 of 3 guys right? Baltimore and Cincy aren't taking DB's they have bigger needs. New England is more in the market for a cover corner so New Orleans knows their guy is safe. Minnesota won't have enough to get that high so their out. If you guessed Big D, then your right. Watching Plaxico Burress run rough shot over Dallas in each of their 3 meetings is still making Jerrys' stomach churn. Who would Dallas take if they did get #7? I believe Mr. Jones already knows who he is. Leodis McKelvin, CB from . . . Troy St., last time America's team chose a guy out of Troy St it turned out fairly well, see DeMarcus Ware, and when I say fairly I mean, the guy is a beast. 2 Seasons starting for the "other" Trojans, McKelvin had over 100 solo tackles. I echo the statement from WalterFootball.com, Jacques Reeves sucks. Things go this way and NE at 22 will still be able to select from bevy of young CB's available. 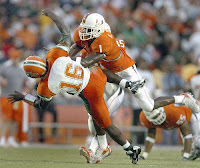 BACK to New Orleans pick, where was I . . . . . . .OH YEA! "The U" With a secondary that couldn't fight their way out of a wet paper bag, thanks Coach Davis, the Saints need to get physical and tough. FS out of Miami, Kenny Phillips is a certified play maker . . . . following in the footsteps of Ed Reed and the late Sean Taylor, Phillips is an excellent ball hawk. Do you like 6'2" 210 pound safties with speed? I do. Several draft sites describe Kenny as aggressive and physical, just what New Orleans needs. PLEASE New Orleans take Kenny Phillips.