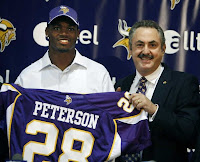 Allow me to preface this by saying, I love Vikings rookie sensation Adrian Peterson. The young man is amazingly talented, he can run over you, break your ankles, and put the rock in the end zone. He was among the top in every statistical rushing category this past NFL season and I cannot deny his talent but he is NOT the Offensive Rookie of the Year that the AP has made him out to be.

I don't mean to discredit the rookie year of Peterson at all, but if that is what happens then so be it. 14 Games and 1,341 yards is a very good season. If you do the simple math that comes out to approximately 96 yards per game which is actually great but have you watched those games at all? Peterson shredded the Chicago defense for 224 yards in week 6 and made the Chargers defense look like a Pop Warner team, going for 296 in week 9. Two games accounting for 520 yards on the ground, if you take out those two games he averaged a pedestrian 68 yards per game. The last 6 games he played this season he crossed the century mark only once, against Detroit of all teams, and went for over 50 yards only twice. Those (2) monster games also accounted for 6 of his 12 touchdowns on the season, 12 TD's which was good for 2nd among NFL leaders in that category. Playing behind the best left half of any offensive line in the NFL, which includes Steve Hutchinson & Bryant McKinnie has a BIG something to do with the numbers that both Peterson and Chester Taylor have put up.
So who is Joe Thomas? Aside from quarterbacks I could make a very good argument that offensive tackles, especially LEFT tackles, are the important players on the field. They protect the quarterbac 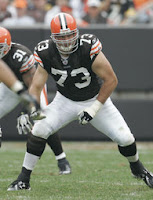 ks backside and create holes to run through for those backs that enjoy 1,000 rushing seasons. Ask Stephen Jackson how he liked playing without Orlando Pace in front of him, or better yet ask Torry Holt how it felt having the 3rd string QB throw to him, point proven. Joe Thomas is and most likely will be the starting left tackle for the Cleveland Browns for the next 10 seasons. If I dreamt up what I wanted out of an offensive lineman, that lineman would be Joe Thomas, then I'd kill myself for dreaming about offensive linemen. At 6'6" and 315lbs. the Cleveland Browns top pick in the 2007 NFL Draft out of Wisconsin started all 16 games for the 10-win Dog Pound and came within a Derek Anderson choke fest against Cincy in week 16 away from making the playoffs. Former embattled Raven RB, Jamal Lewis, now playing for Cleveland, rushed for 1,300+ yards and revived his seemingly dead career this year for which you can give some if not most of the credit to Joe Thomas. This season was Lewis' most productive since his record setting year in 2003 when he rushed for 2,000+ yards and 14 touchdowns, rushing behind of course, all-world tackle, Jonathan Ogden. You want more? Derek Anderson was sacked 12 times over the 15 games that he started, less than once a game. I polled my crew on this one:
Danny K - "Adrian had the best running line in football, Thomas protected Anderson and revived Jamal Lewis"
Roche - "Who was Derek Anderson?"
Dan G - "O-Line never gets this type of credit"
Proof is in the no credential, opinion giving, mid-twenty year olds. Thanks fellas.
Posted by Lynchy at Friday, January 04, 2008