Indianapolis Colts defensive end Robert Mathis can claim that it is all about winning this week, but he isn't fooling us. There lies bigger things at stake in Jacksonville this weekend than a 3-13 finish

for the Colts. A #1 selection, the future of the franchise, and even possibly a package that could give Manning another legitimate shot at a Super Bowl trophy. Only one question remains for both the Colts and everyone involved . . . is Stanford quarterback Andrew Luck the next Peyton Manning?!?

Big arm, cerebral upstairs, charisma to lead, he's got everything which Manning has and then some. The Texas native has done everything you can ask for from a top football prospect, especially one who lives under center. For three seasons in Palo Alto, 6'4" quarterback Andrew Luck has been simply dominating. Seven losses in three years? That's very good. Eighty touchdowns, well that's just real official! Here's a player who has put Stanford on the map, made all the throws, taken every snap, and already played a couple seasons under an NFL head coach in current 49ers head coach Jim Harbaugh. If that isn't worth taking a shot at the top of the draft, then I don't know what is.

As for Peyton Manning, he's 35 years old and will be 36 by the time he gets back to the NFL in 2012. Maxium, that gives him 3 to 4 seasons, maxium. A very questionable neck injury which kept him out an entire season at 35-years old, is it far fetched to think he hangs it up in two seasons?!? And then where are you?!? Vice chairman Bill Polian is an older executive who most likely is nearing the end of his career in the 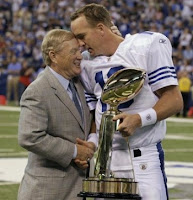 front office, meaning someone is going to need to take that job, someone who would want to make a name for himself, what better way to do that than with a young super star quarterback. And owner Jim Irsay, ask yourself what the Colts are?!? Can they become a perennial winner or is there franchise directly tied to and solely tied to Peyton Manning?!? Bill Belichick and Bob Kraft didn't stick with Brady post-season ending injury in 2008 because they owed it to him, they stuck with him because he was the best player for the job and not Matt Cassel, despite his 11-5 record that season.

Manning's got value, believe me. The Jets would be interested in fielding offers, the Cowboys would be rumoured, the Dolphins would be in the game, the Broncos and or the Chiefs? Think about it, how many teams took a shot on McNabb and Favre nearing the ends of their careers?!? Washington?!?

Map it out here Indianapolis. With a win in Jacksonville, you are costing yourself much more than you can imagine. Part ways with both Reggie Wayne and Peyton Manning, get as much as you can for Manning, draft Andrew Luck and plan for the future. No, you didn't think you'd be here at any point over the last two years, but you are and it is time to adjust for the next ten years of this franchise!