First and foremost, Happy New Year from all of us at LynchyRightNow. We truly hope you had a great 2011 and are forging into to 2012 just as we are.

Sunday marked the end of the regular season in the NFL, and as always it was not without its fair share of high drama. From Miami to Denver and back to New York, involving everyone from Tim Tebow, Eli Manning, and a rookie quarterback leading the Cincinnati Bengals into the postseason . . .

First up, the un-expected.

It's worth noting that in a virtual meaningless game for the NFC's top-seeded Packers, playing in place of the resting starter Aaron Rodgers, back-up quarterback Matt Flynn had a G-A-M-E. Against division rival Detroit, the Packers 26-year old quarterback tossed six touchdown passes for 480 yards including the game winner with 1:10 remaining on the clock. However, turn back the clock to December 19th in 2010 on the road at New England. That night Flynn 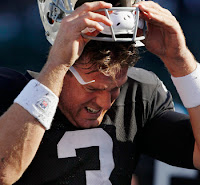 put up three touchdowns in a 4-point loss to the Patriots and looked really good doing so. In a league always looking for the next quarterback, someone ought to give a hard look at Matt Flynn.

The Raiders not taking care of business, don't laugh. It is unexpected that Oakland didn't take care of a business with one last opportunity to do so. At home against a 'playing for not' Chargers team, they got dropped 26-38. Finishing the season losing four of five has this franchise which looked so promising heading into December, now on the outside looking in at the postseason. Give Chargers quarterback Phil Rivers some credit for Sunday. With nothing left to play for than pride itself, Rivers completed 19 of 26 passes for over 300 yards while hitting for three touchdowns. The six straight losses in the middle of the season still have us wondering how Norv Turner has survived this long in southern California.

Save it, for the off season.

For the Dallas Cowboys, it began and ended in New York City. First there was the 3-point loss to the Jets in the September 11th opener and then the New Year's Day division losing loss to the Giants. Now, the Cowboys are headed home on the tail end of another disappointing season that they'd once had high hopes for. However, I caution all of you on pointing fingers at veteran quarterback Tony Romo. For the first time in his career, this ain't on him! Sure, Romo had a hand in their losses to the Jets and Lions but missing the postseason, losing to the Giants twice, and coughing up late forth quarter leads (multiple times), that's on the headsets on the sideline. Romo had a very good season in 2011, over 4,000-yards

passing, 31 touchdown passes, all while playing with a young offensive line and multiple tough injuries. Without Romo, the Cowboys 8-8 record would look much, much worse.

Adversely, quarterback Mark Sanchez is going to be held accountable for the 2011 New York Jets. It's too easy to point the finger at Sanchez, 18-interceptions, a passer-rating of 65.2, and being completely inept in big game situations. Where do they go though?!? Do they find a veteran and just part-ways with Sanchez? Do they bring in competition for Sanchez? Do they fire offensive coordinator Brian Schottenheimer? Here is the situation though, they lost their final three this season, they allowed the Patriots to score 67-points on them in their two meetings, they got embarrassed out west, first against Oakland then in Denver, when do you call out head coach Rex Ryan for that?!? His team wasn't prepared heading into the season and it shouldn't be a shock that they finished 8-8.

Great quarterback play, is everything you need.

How good was this season on a passing level?!? Literally, chart topping. This season (2011), not one, not two, but three quarterbacks passed for over 5,000 yards and placed themselves in the top-five single season passing record books. Prior to 2011, only two quarterbacks in THE HISTORY of the game had gone over 5,000 yards in a single season. Drew Brees torched Dan Marino's single-season record which had stood since 1984, for the second time in his career Brees posted a 5,000+ yard season, this one at 5,476 yards. Patriots signal caller Tom Brady also passed Marino's 1984 mark, putting up 5,235 yards, 151 yards more than Marino's. Also, Detroit Lions

playoff bound quarterback Matthew Stafford hung a 520-yard game on the Green Bay Packer defense to post a 5,038 yard season, at just 23-years old. For those of you who think a rushing attack will carry a team to a Super Bowl, I highly doubt it!

Because we won't talk about him till next season, the rookie year of Carolina Panthers top pick in 2011, quarterback Cam Newton, has a ton of reach. In his first season in The League, he stayed healthy, he produced, and more importantly he was a leader! His Panthers won four more games than they did a year ago and lost by eight or fewer in six additional games. Even more impressive, he was the major change on the field from the Panthers a season ago. He didn't have Michael Turner joining him in the backfield as Matt Ryan did in Atlanta and he didn't join a ready-made team as Joe Flacco did in Baltimore, he was the change. All of that is more eye-popping than the 4,000+ passing yards and 21 touchdowns. The REACH; Baylor quarterback Robert Griffin III will be an option leading a team in the NFL next fall. Just like Newton, he's a leader on and off the field, couple that with his big arm and ability make plays, I'd say someone is going to be very comfortable giving him the keys to their franchise.

Don't Sleep On, they could make noise.

Why not the Bengals?!? Sure they backed in, going 2-3 down the stretch, including a loss to the same Houston Texans team they'll play next Saturday, but why not them?!? Houston is banged up, they'll play a soft New England secondary in the second round of which A.J. Green can tear apart, why not Cincy?!?

I don't know if the Bengals will be on everyone's watch list, but I do know that I like what I've seen from first-year starter Andy Dalton.

The Falcons haven't come up big in a single game this season, and while New York is still rejoicing on their New Year's Day division-winning victory over Dallas, the Falcons are preparing for a road trip to The Big Apple. They've only beaten one playoff team all season long, the Lions, but even still I like how their offense has developed. Rookie receiver Julio Jones has been a real factor lately and if the Falcons can keep the Giants defensive line honest by rushing the ball with Michael Turner, things could get scary with Atlanta's receivers in that Giants secondary.

While we can't believe the regular season is over, we're very excited for the next month, from Wild-Card weekend to the Super Bowl . . . GET AFTER IT!

For more, keep following us on Twitter!
Posted by Lynchy at Monday, January 02, 2012