A special post for Boston College junior linebacker Luke Kuechly. We've been season ticket holders for quite some time on Chestnut Hill at LynchyRightNow, and no one is more proud to be fans than us on a day like today.

With Boston College linebacker Luke Kuechly being awarded the 2011 Collegiate Butkus Award Winner, it might just put a bow ever so tightly around his time on Chestnut Hill. It should however come as no surprise to anyone that Kuechly is awarded as the nation's top linebacker in 2011. Amassing over 530 tackles in his three-year career, including an Atlantic Coast Conference single-season

record of 191 tackles this season, Luke Kuechly has been in a word, awesome. On a 4-8 team in 2011, Kuechly never quit leading his team to a 3-2 finish in their final five games. During those final games, Kuechly's Boston College defense held opponents to just over 19 points-per including just two touchdowns against Notre Dame and 10 points to bowl bound North Carolina State. For voters, it was his game clinching interception returned for a touchdown against Miami in the season finale that must have done it. On the road, a day after Thanksgiving, with no shot at reaching a Bowl Game, and Kuechly led his defense to yet another standout performance.

For Kuechly, his time at Boston College has been interesting to say the least. Under-recruited out of St. Xavier High in Cincinnati, back yard recruiting for both Notre Dame and Ohio State, Kuechly arrived at Boston College with the intent of being red shirted while studying under the tutelage of a reigning ACC Defensive POY Mark Herzlich and senior linebacker Mike McLaughlin. Then thrust into a starting role as a 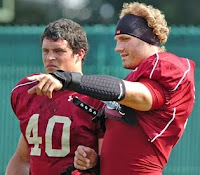 true freshman when Herzlich began his battle with Ewing Sarcoma, Kuechly would immediately be noticed by Eagles fans and fans of the ACC. In 2009 Kuechly recorded 150 tackles, an impressive mark for any linebacker let alone a true freshman just months removed from his senior year in high school. Playing alongside Herzlich as a sophomore, Kuechly evolved into the leader of a tough, gritty defense and for the first of two times set an ACC single season record for tackles. Finishing off his junior season, Kuechly has already broken his own record, been awarded an ACC Defensive Player of the Year award of his own, and now becomes the first linebacker at Boston College to win the Butkus Award representing the best linebacker in the country.

From all of us who are fans of the Boston College Eagles, his name may be alongside some of the recent star linebackers such as Clay Matthews and Von Miller, but his shines the brightest! Congratulations Luke Kuechly!
Posted by Lynchy at Sunday, December 04, 2011