In recent days the likelihood that the NBA's best point guard will be a Laker or Clipper by Christmas is becoming a reality. While Orlando Magic franchise center Dwight Howard wants out of Disney in hopes of a landing spot in the Tri-State Area, things are seemingly going to change. All this proposed movement has really got me thinking. Is it just me or is today's hoops star not 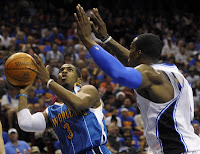 interested in being 'the guy' anymore? Is he too scared to go it alone? Is the struggle of fighting for a championship surrounded by talent not as good as him too daunting? Are they all that afraid to be the next Charles Barkley, 16-years with zero rings? Whichever it may be, we've seen the last days of any semblance of league wide balance in the NBA and the game has changed, this time not for the better.

Should we be pointing our fingers at the first successful attempt in recent years to combine talent strictly with the goal of winning an NBA Championship? Were the 2008 Boston Celtics and team President of Basketball Operations Danny Ainge the architects of what we're seeing today? Probably not, I don't believe it's the same scenario. What the Celtics accomplished was simply what the Houston Rockets attempted in to do in 1996 and then again in 1998. If you recall, the Rockets first added the 'desperate to win a title' Charles Barkley following the '96 season, running a starting five that included himself,

Hakeem Olajuwon, and Clyde Drexler. Then, after the retirement of Drexler the Rockets would once again add a superstar in 6X-champion Scottie Pippen to pair with Olajuwon and Barkley. Both of these attempts by the Rockets didn't pan out the way they had hoped, but still it was an attempt to push together as much talent as possible on a single roster to win a title. When Ainge and the Celtics traded for the veteran Kevin Garnett at 32-years old and a 32-year old Ray Allen to pair with their franchise All-Star Paul Pierce it worked, and the Celtics won an NBA title. So the blame can't go completely on the Celtics, they just saw the blueprint which Houston laid out over a decade earlier, and did put together All-Stars at a younger age than the Rockets had.

On the heels of the Celtics championship campaign in 2008, the catalyst for today's NBA began, enter the '08 Summer Olympic Games in Beijing, China. For the first time in their young NBA careers every star from LeBron James, Carmelo Anthony, and Deron Williams to Chris Paul, Dwyane Wade, and Chris Bosh began to realize what it was like to share the load and carry less of

the burden of winning. After spending a summer with stars on the same level as they were and successfully winning a gold medal in the summer games, they were going to determine the landscape of the future NBA. 'Melo wasn't going to be the only player carrying the Denver Nuggets. Dwight Howard didn't want to make it on his own in Orlando anymore. LeBron James hadn't played with a player better than Larry Hughes during his time in Cleveland. Chris Paul was tired of carrying his team in New Orleans. Chris Bosh wasn't about to play north of the border any longer in Toronto. Deron Williams no longer had the stomach for the Utah Jazz. Utah, Toronto, Cleveland, New Orleans, Orlando, and Denver were all entering a new NBA, one where hoping you keep your superstar was no longer an option, but their option.

Starting with LeBron, Wade, and Chris Bosh joining together in Miami and then with Carmelo Anthony finding his way to New York alongside Amare Stoudemire, everything has changed. Former Jazz star guard Deron Williams found his way to New Jersey when he forced Utah's hand knowing he wasn't re-signing after the 2011-2012 season. Chris Paul is in the midst of leaving the NBA owned New Orleans Hornets with ten cents on the dollar for his talents to find their way to Los Angeles. Dwight Howard is likely to find his way with either of the two point guards, the

best two the NBA has to offer. When their talent was stretched coast to coast it made the NBA interesting, now we're just looking at a world with the Nets, Knicks, Lakers and or Clippers, paired with the Miami Heat with the majority of the young talent in the league, and that can't be better. We're still left asking, why?!? LeBron had reached an NBA Finals in Cleveland, Dwight Howard reached one in Orlando, Wade won one in Miami, Deron Williams had the Jazz going to the Western Conference playoffs year after year, Carmelo Anthony reached the 2009 Western Conference Finals, but you couldn't keep doing it? Now where are you? What are you doing for the product? How many of you are actually going to win multiple rings? There is no way this NBA is better.