We aren't going to let college football play out here, we're going to usher out sixty-players in six weeks from Andrew Luck to Vontaze Burfict and everyone in between . .

Landry Jones, quarterback Oklahoma He was LynchyRightNow's pre-season Heisman pick, that didn't work out as planned. However, in three seasons as a starter in Norman, Jones has accumulated 29 victories, a BCS Bowl win in last year's Fiesta Bowl, all while passing

for over 12,000 career yards. Not a bad career I'd say. Landry is a 6'4" prototypical quarterback, he's got a big frame, big arm, and played on some of the games biggest stages. Actually, that is where the problem lies. In Oklahoma's three losses this season, certainly not entirely his fault, Jones was intercepted four times and coughed up fumbles a couple more. For our money, you can bet Jones is either the third or fourth quarterback selected in the 2012 NFL Draft. Each year there is a team who drafts a quarterback higher than he should be selected because they are terrified they won't have the ammunition to move back and get him where he should fall; see 2011 - Vikings take Christian Ponder twelfth overall. With this weeks news that USC junior quarterback Matt Barkley is returning to SoCal for his senior season, Landry Jones has moved into the top ten. Projection: Cleveland, Washington, or Miami

Jonathan Martin, offensive tackle Stanford Martin is one of the larger reasons Andrew Luck has enjoyed so much success in the passing game while in Palo Alto. The 300 lb. tackle is an extremely talented pass blocking and rush blocking force on Stanford's offensive line. When we stick to value while evaluating top offensive lineman, Martin has all the tools. Quick off the ball, strong in pass protection, and a very intelligent player. Projection: Miami, St. Louis, and Minnesota

Lamar Miller, running back Miami It took twenty-eight picks for a running back to come off the board in 2011. Nine picks in 2010. Twelve picks in 2009. My point?!? In today's NFL running backs aren't a necessity, however Miami's Lamar Miller needs to be taken seriously. The sophomore back, despite having off season shoulder surgery should be 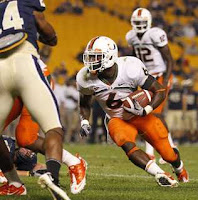 able to contribute right away on a number of NFL teams. He's a speed running running back who can catch the ball out of the backfield nicely. Miller fits a two-back system, a player who won't have to carry the load but can wear out defenses early. In his first three games this season, a stretch which included Ohio State and Kansas State, Miller posted three-straight 100-yard rushing games averaging 6.5 yards a carry. Next to Alabama running back Trent Richardson, who brings entirely different skills to the game, Lamar Miller is one of the top running backs in the draft. For us it was his 166-yard performance against Virginia Tech that did it. The Hurricanes leaned on Miller as he posted close to ten-yards per carry that night in a 3-point road loss in Blacksburg, VA. Projection: Denver, New York (Giants), or New England Cause I'm sure that you knew what the Patriots were doing in the draft, right?!?

Jerel Worthy, defensive lineman Michigan State We've loved the way Worthy plays since we saw him in back-to-back weeks against Michigan and Wisconsin, both Michigan State victories by the way. Obviously at this point, the rest of the country has caught on as Worthy took home 1st team AP All-American honors this season. At the next level defensive coordinators would love to have the quick on his feet Worthy knowing he can get off the ball super fast and put pressure on the quarterback. At 6'3", 310 lbs. we believe Worthy to be first-round eligible and would work great with defenses already intact at the end of the 1st. Projection: New England, Dallas, and Denver

Still we'll focus on his time at Florida where he was better than 2010 #7 overall selection, teammate Joe Haden. After Haden's departure from Florida, Jenkins turned it on in 2010. Breaking up eight passes all while recording 3 INT's and 44 tackles from his corner spot on the Florida defense. More so, Jenkins started as a true freshman at Florida as a part of their 2008 National Championship team. This season at Northern Alabama he showcased his return game in which Jenkins returned almost twenty punts for close to 400 total yards. We love Jenkins talents and so long as he prove to scouts and team ownership that his off-the-field activities are behind him, he's an elite talent. If not for being slightly undersized we'd declare him a better cover corner than LSU's Mo Claiborne. Projection: Cincinnati, Dallas, or Tampa Bay

Andrew Luck, quarterback Stanford What hasn't been said already? We can clear this up for both Indianapolis and St. Louis right now; Barring injury, Andrew Luck will be the next big thing in the NFL and is worth every bit of hype surrounding him. He's got the NFL size - 6'4", just like Patriot signal caller Tom Brady. He's very intelligent - just like Colts current quarterback Peyton Manning. He can move outside of the pocket - just like Packers quarterback Aaron Rodgers. What else do you need to say?!? We just compared him to three quarterbacks wearing big rings! Projection: Indianapolis, St. Louis, and Arizona (probably a reach)

Matt Kalil, offensive tackle USC Here's a dirty little secret for you, Kalil might actually be the best player in the 2012 NFL Draft. As the anchor of the USC offensive line, Kalil didn't allow a single-sack all season long while front lining a line that

allowed the fewest sacks in the country. At 6'7", Kalil is big and athletic enough to be an offensive tackle at the next level, and by all accounts will be the first offensive lineman to come off the board in this springs draft. Matt Kalil is a dominant 3-year starter at USC that NFL teams have had on their big board since last year and a perfect fit for a number of teams. In a passing league, Kalil's talents in the pass blocking schemes will be a great asset for any team with a young quarterback and developing skill players around him. Projection: St. Louis and Minnesota

David DeCastro, offensive guard Stanford At 6'5" and 312 lbs., Stanford guard David DeCastro is a mammoth of a man. Along with Jonathan Martin, the Cardinal standout tackle, DeCastro has been protecting Andrew Luck for a while now. DeCastro is the best guard in the draft and is going to make a ton of noise early on with teams jockeying for position to draft one of the most elite interior lineman to come out in recent years. Look for a team with a solid ground game and young quarterback to make a move for DeCastro, his intelligent play and size have teams buzzing for an in-between the tackles rushing game. Projection: San Diego, Tennessee, & Miami

Justin Blackmon, wide receiver Oklahoma State While Luck might be the most elite and Kalil might be the most talented, our guy is Justin Blackmon and has been for two years. He's a rare talent at the receiver position, similar to NFL stars Larry Fitzgerald and Calvin Johnson. Too soon to say that? We don't think so. Thirty-seven touchdowns, two-hundred and forty-four

catches, and a mind dropping 3,378 receiving yards, all to go along with his back-to-back Biletnikoff Awards as the nations top pass catcher. The twenty-one year old receiver has had a very great college football career highlighted this season with his team reaching a BCS bowl game in the Fiesta Bowl, a game in which you can bet Blackmon will be a major factor. His best feature may not even be his hand of which are exceptional but his ability to make plays after the catch, an important attribute to have for an NFL receiver. Blackmon has the ability to go get passes and make plays down the field after the catch, better than any receiver in the draft. Joining Stanford quarterback Andrew Luck and SoCal offensive lineman Matt Kalil, Blackmon is a can't miss. Projection: St. Louis, Minnesota, and Jacksonville

Whitney Mercilus, defensive tackle / defensive end Illinois A finalist this past season for the Bronko Nagurski Award, Mercilus was standout all season long at Illinois. With that, his stock couldn't be higher. Amongst the countries leaders in sacks, Mercilus is making NFL scouts perk up to catch a glimpse of a future edge rusher at the next level. As teams pass more and more in the NFL, a multi-tool pass rusher with Mercilus' ability becomes all the more valuable. Projection: New England, Buffalo, and Dallas

Next week, Robert Griffin III, Devon Still, and more!
Keep following us on Twitter!
Posted by Lynchy at Tuesday, December 27, 2011