With Temple and Wyoming set to meet in the Gildan New Mexico Bowl on Saturday afternoon, bowl season is about to kick-off. For the next three weeks we'll 'bowl' from Albuquerque to Vegas and from Shreveport to the Bronx. All matchups that we don't get to see everyday from The Big Ten vs. The SEC and The PAC-12 vs. The Big XII . . .

(5) OUTBACK Bowl Michigan State vs. Georgia This contest between the runners-up in both the Big Ten Championship & the SEC Championship is sure to draw some attention. Spartan signal-caller Kirk Cousins, a senior, will do battle against Georgia's second-year quarterback Aaron Murray. Both

quarterbacks took big strides this season throwing for over 2,500 yards each and in Cousins' case, over 3,000 yards. Michigan State head coach Mark Dantonio and Georgia's Mark Richt will have their defenses ready to go in Tampa on January 2nd, in what will sure to be a shootout with their two star quarterbacks who have risen to the occasion all season long. Keep an eye out for Michigan State's junior defensive tackle Jerel Worthy. Weighing in a 310 lbs., Worthy has ben a stand out all season long earning him 1st team All-American honors from the Associated Press.

(4) TAXSLAYER.com Gator Bowl Ohio State vs. Florida It's not often that a matchup between two powerhouses such as Florida and Ohio State feature programs with matching 6-6 records and 3-5 in their respective conferences. However, our second game between Big Ten and SEC teams has a more interesting twist off the field. After stepping down from Florida a season ago seeking time off, 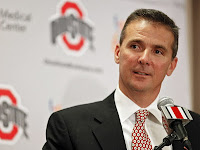 Urban Meyer recently agreed to become Ohio State's new head football coach, enter the drama. Will the Gators show up to make a statement to Meyer and on behalf of their head coach Will Muschamp whose first year hasn't gone as planned with losses to Alabama, LSU, Georgia, and Auburn. Or does Ohio State play inspired football as they had earlier this season beating Illinois and Wisconsin? We think the Buckeyes are going to look fantastic with Meyer watching, mainly because Florida's defense has been putrid for most of the year and offensive coordinator Charlie Weis is already on his way out the door to Kansas to takeover the Jayhawk football program. Either way, they'll be a ton of hype surrounding this one!

(3) TICKETCITY Bowl Houston vs. Penn State Both Top 25 ranked programs are currently under the direction of interim head coaches, for entirely different reasons however. With all of the scrutiny and embarrassment Penn State has gone through this season, the TicketCity should have been a

welcomed distraction for some of their older players, things have unfortunately taken an awkward turn this past week with news fluttering out of in-fighting between quarterback Matt MaGloin and oft-injured receiver Curtis Drake. Then there is the Houston Cougars who were undefeated behind super-quarterback Case Keenum before losing to Southern Mississippi in the Conference USA title game. Since then, Keenum wasn't invited to New York and the Heisman ceremony, Houston found themselves on the outside looking in at the BCS, and worst of all, head coach Kevin Sumlin jumped ship for College Station, TX and Texas A&M. Two programs in interesting positions at this point, the back drop of TicketCity has got everyone buzzing. Will Keenum give us one last Houston Cougar mind-numbing performance?!?

(2) AT & T Cotton Bowl Kansas State vs. Arkansas What the BCS is missing out on, Dallas Cowboys executive vice president Stephen Jones isn't. Bringing #6 Arkansas and #8 Kansas State to

Cowboys Stadium for the January 6th Cotton Bowl is going to make for quite an event. The 10-2 Kansas State Wildcats have played great football for head coach Bill Snyder all season, most of all quarterback Collin Klein who has had an absolutely great junior year. In Kansas State's 4-overtime victory against Texas A&M, Klein put the Wildcats on his back rushing for five touchdowns and passing for another. As for Arkansas, they've just destroyed everyone on their schedule with the exception of both teams in the BCS National Title game. Klein vs. the Hogs?!? I'll take that!

(1) TOSTITOS Fiesta Bowl Stanford vs. Oklahoma State I don't know why more people aren't excited for the fireworks that will go down in Tempe, Arizona on January 2nd. Two high-powered offenses led by Andrew Luck at Stanford and Brandon Weeden at Oklahoma State are most definitely going to light up the score boards. The #3 team in the country Oklahoma 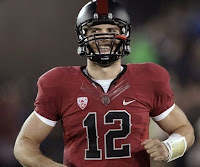 State has been on a tear all season long. Weeden's offense torched Heisman winner Robert Griffin's Baylor Bears hanging a 50-spot on them. After thumping Texas earlier this season in Austin, the Cowboys turned it on against Oklahoma in Bedlam and made a statement roughing up Landry Jones and the Sooners to the tune of 44-10. As for Andrew Luck, you can bet the future of the NFL is going to want to put his stamp on his time at Stanford and what better way to do it than on a national stage in Tempe. After getting smoked by Oregon in early November, Luck's banged-up Stanford team saw their National Championship hopes vanish along with his shot at a Heisman Trophy. Now, the Fiesta Bowl will give him and Stanford a great opportunity at redemption!

Catch us on iTunes for an all new RightNowPodcast later this week!
Posted by Lynchy at Friday, December 16, 2011