I'd be remiss if I allowed this to pass. The ousting of eight-season Red Sox manager, Terry Francona, makes you all come to a stand still. It is the termination of the manager who went from being most recognized for his time spent as skipper of the most infamous minor league baseball season of all-time, that of 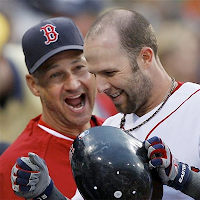 the 1994 Birmingham Barons and their outfielder with three NBA championship rings, to the manager responsible for not one, but two historic Red Sox World Series crowns. The announcement while rumoured for more than twenty-four hours, was as epic as his 7-20 month of September and followed collective collapse on the field. With that, the Tito Francona-era in Boston is over.

Let the rose petals fall upon this gladiator of a manager first. Since his arrival in 2004, the Red Sox have the second highest winning percentage (.574) in all of baseball, they've reached the postseason in five of his eight seasons, eleven games over .500 in postseason play, and most importantly, two shiny trophies embossed with the words, World Series Champions. Is that not what you asked for? What you dreamt for? What you prayed for? The ability to manage the 'larger than life' clubhouse 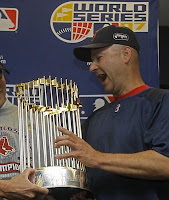 personalities of Pedro Martinez, David Ortiz, Manny Ramirez, and Curt Schilling. To deflect the criticism from fans and media alike on the play of such stars as Edgar Renteria, Daisuke Matsuzaka, J.D. Drew, John Lackey, and most recently Carl Crawford. A maestro of sorts bringing along the young talent of Kevin Youkilis, Jonathan Papelbon, Jacoby Ellsbury, and most notably, our 2008 American League M.V.P., Dustin Pedroia. Francona has managed to set the precedent in Boston for all managers who come after him. You don't have to be the player's manager who stands behind David Ortiz in the worst of slumps, who runs out veteran catcher Jason Varitek out of respect despite his inabilities at the plate, or even the manager who stood by Tim Wakefield during his brutal quest for win number 200 at age 45, but you have to win and win while managing everything that comes with what baseball is in boston today. Francona has done just that, and in the end he might have just become burnt out quicker than we had hoped for and expected.

Now, it's just different. The Red Sox haven't won a postseason game since 2008. Management has flooded the clubhouse with a laundry list of very well payed superstars from a $12 million dollar-a-year designated hitter to a $17 million dollar-a-year frontline ace who couldn't get it done in September. A clubhouse with entitled players with no hunger for another World Series. Things have changed in Boston, possibly for the better, but they've definately changed. When Francona came on board it was about bringing together players who wanted to bring this city and its fans what they'd longed for. It was about a veteran staff ace who had become a demigod in this city every five nights and wanted the validation of putting 'The Great Bambino' to rest. It was about bringing in a brash and sometimes arrogant clubhouse leader with a World Series ring on his resume to show a team how to win in the fall. It was about castoff players like Kevin Millar and Dave Roberts wanting nothing more than to win.

In 2007, when Francona would lead the Red Sox to yet another World Series, it was changing but very similar. It was about a 5-8 second baseman who was one way or another making a name for himself. It was about a closer with a personality and a hunger to win bigger than his ego. Today, it's far from any of that. The organization has begun awarding players like John Lackey and Carl Crawford for what they've done rather than what they will do. They've held on too long to players like Jason Varitek and I'll say it, David Ortiz. The days of brash moves like moving Nomar

Garciaparra, refusing to pay Pedro Martinez, and parting ways with Manny Ramirez are gone. For Terry Francona, it may have just been all too much to handle, for too long.

First it was the awful start out of the gate, and it wrapped with the worst September since the Eisenhower administration. I'll refrain from everything in the middle and the rumours of clubhouse activities, it isn't necessary to rehash at this point. At the end, Francona didn't disappoint anyone despite what he may say, he fell on the sword for a franchise which believed in him eight seasons ago and which came to him on Thursday to ask him to take the fall for what they've become.

For that Tito, I applaud you my friend.
Posted by Lynchy at Friday, September 30, 2011