Deion Sanders needs to shut the f*ck up! Is that out in front enough for you? I can only take so much from this man, and today it ends. On the heels of todays outburst about current Cowboy signal caller, the beleaguered Tony Romo, I've had it. Let's get a few things clear when it comes to 'Primetime':

(1) Tony Romo is more of a Cowboy than you'll ever be, ring or no ring. Oh no?!? In Cowboy lore we don't give a damn who the corners are, and we've got the only corner to win Super Bowl MVP honors. Since taking over the position on October 15th, 2006 Romo has put up with more scrutiny whether the fault of his own or not, than any Cowboy in the past twenty-five years. Over the past six seasons and into this 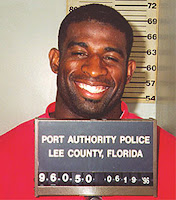 year Romo has provided stability at a position in North Texas that was mired in the days of Quincy Carter, Drew Henson, and a more than past his prime Drew Bledsoe. What were you to the Cowboys Deion? A hired hand? You played on a loaded defense and opposite an offensive side of the ball which was arguably more explosive than any other in NFL history. They won two Super Bowls before you came on board my friend and you're going to be the voice of what can win in this league and what can't?!? Of who can get it done and who can't?!? Romo's name is going to go down in Cowboy history with the likes of Staubach and Aikman, mark my words. We care about quarterbacks in football Deion, not the opinion of an ego-maniacal corner who couldn't tackle.

(2) Shouldn't you be hawking DirectTV somewhere? Why should we take you seriously?! You don't take yourself seriously, not as a journalist that's for sure. If Aikman, a Cowboy quarterback, wants to put anything out there then fine, but you?! What do you know about having the team on your shoulders?! Your reality television, self-promoting Hall of Fame induction speech, DirectTV ads,

go on we can name hundreds of the laughable ways you attempt to keep yourself relevant. But I've got one way you haven't tried yet, watching film. Any reason you didn't take Rob Ryan to task for refusing to double Calvin Johnson all day on Sunday? How about Jason Garrett for abandoning the running game in the second half? Your a clown Deion, just like Chris Cooley, Washington Redskins tight end, who like you decide the only way someone will give you a microphone is if you tee off on something you know next to nothing about, something that any twelve-year old in front of the television could have regurgitated from the media.

This guy is a joke, he's a fraud, he's a character playing a part on a cable television show. You want to ride the Romo-coaster all season long because you need to talk about him that much, go right ahead, but know at least one person thinks you're a complete fool and when he remembers The Dynasty in Dallas during the mid-90's, 'Primetime' doesn't enter the discussion till somewhere after Aikman, Smith, Irvin, Johnston, Novacek, Harper, Haley, Norton Jr., Bates, Brown, Maryland, Stepnoski, Newton, Woodson, Lett, and Tolbert.
Posted by Lynchy at Tuesday, October 04, 2011