Decades of Futility; Be Gone

It's the easy story in the NFL this week, no? The Bills broke a 15-game losing streak against division rival New England, all the while improving to 3-0 on the season. The Lions beating Minnesota in The Metrodome for the first time since '97 and doing it in epic fashion none the less. Two franchises mired in inconsistency while down-and-out for years. Now, on Monday morning, things were finally looking up after an exciting Sunday afternoon for each.

The Detroit Lions have in every way possible come back from as far back as you can imagine. Forget the "we're so terrible, I'm retiring" move pulled-off by possibly the games greatest rusher ever, Barry Sanders (Lions RB '89-'98), and 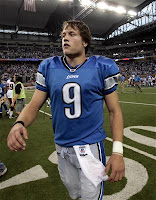 try to forget the seven plus seasons under the front office direction of Matt Millen, this team was 0-16 just three seasons ago in 2008?!?! Now, with budding superstar quarterback Matthew Stafford (drafted '09) finally healthy for the first time since his rookie season the Lions don't just look better, they look scary.

No one circles the . . . I'm not Berman, we're not doing this. The Buffalo Bills might just be doing it with the proverbial smoke 'n mirrors, but I'll take it and so will head coach Chan Gailey. The Bills have put up back-to-back weeks of monster second half comebacks to find themselves in unfamiliar

undefeated territory. When every team around them was selecting a young quarterback ready to embark on their NFL career in this years NFL Draft, it was Gailey and the Bills who stuck with their twenty-eight year old signal caller, journeyman Ryan Fitzpatrick. After their 34-31 victory over the Patriots and their swiss cheese secondary, it's paid off.

Now lets ask the real question here. Are we buying both the Lions and Bills? At 3-0, both teams have handled their business through three weeks and despite big deficits have come back to pull out thrilling victories.

The Lions found themselves in a 0-20 hole heading into halftime on Sunday afternoon, not a place where a young team looking to jump out of the gate looking really well would want to be. Then they flat out stormed back on Minnesota, like good teams do. Stafford went out and completed 32 passes, connecting with his future superstar tight end Brandon Pettigrew and arguably the best receiver in the NFL Calvin Johnson, eighteen times for two-hundred twenty yards and a pair of touchdowns for

Johnson. Their nightmare of a defensive line led by Ndamukong Suh and Kyle Vanden Bosch sacked Vikings quarterback Donovan McNabb four times and ate up a Minnesota offense that scored just three points the rest of the way. Their 26-23 comeback overtime victory against Minnesota was just the latest. The Lions have scored over 100 points in the first three weeks of the season, while allowing just 46 points per game. Here is the bottom line on the Lions; They've hit homeruns in three particular recent drafts with their first selections, that's a fact. The selection of wide receiver Calvin Johnson in 2007, a beast on the offensive side of the ball that is virtually impossible to cover. Matthew Stafford in 2009, a quarterback with a huge arm that is tough as nails. Ndamukong Suh in 2010, the most dominant young defensive player in the game today. This team is tough on defense and can execute on offense. Before their bye week on November 6th, you could be looking at a Lions team that has just one or two losses at most, they get the REAL tag.

I could hear it from Orchard Park, NY all the way to Worcester, MA on Sunday afternoon. Their victory against the Patriots had exercised a very many demons for Bills fans. Things were going there way at every possible moment. The tipped Brady passes for interceptions which were then returned for touchdowns. The pass interference call to put the ball virtually in the endzone. On the toe of veteran Bills kicker of eight seasons Rian Lindell, the Bills turned a three touchdown deficit into a 3-point victory and watched their fans celebrate the night away. The blowout against Kansas City was impressive in week one, 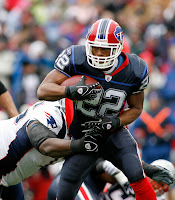 the back-to-back final minute wins at home was awesome for Bills fans, but lets pump the brakes and I know you don't want to hear that. Kansas City obviously has real problems, in their first two games of the season they got outscored 89-10. Buffalo was fortunate to get Oakland coming off their Monday night opener in Denver and then having to fly across country to play the early game just five days later and were lucky to pull it out after going down 3-21 real quick. As for the Patriots, they've allowed a league high 1,131 yards after three weeks, they're the worst passing defense in the NFL. I really like what Fred Jackson (331 yards and three touchdowns) does on the ground and the leadership from quarterback Ryan Fitzpatrick who has proven to be very capable, but give it time. After Cincy this week, the Bills walk into a five week hornets nest, Eagles, Giants, 'Skins, Jets, and Cowboys. I've got them at 4-5 after nine weeks. You don't get the REAL tag, sorry.