They even had head football coach at Oklahoma, Bob Stoops (extended through 2018), on board with a Big XII exit:

"No one wants to hear that, but life changes. If it changes, you have to change with it, to whatever degree."

Now they're playing their hand in Norman, Oklahoma and things are getting very serious. Over the last seventy-two hours the Sooners have decided to act and act with authority.

Monday; Both David Boren, University President at Oklahoma and Bill Powers, President of the University of Texas, cleared the way to make whatever move necessary for either a strengthening of the Big XII Conference or a dissolution of the same conference.

Tuesday; Bob Stoops was locked up through 2018 to the tune of $34.5 million dollars. After his Sooners went to Tallahassee and came out with a 23-13 victory over the Seminoles of Florida State and amongst the rumours of a major college football shake-up, the Oklahoma University Board of Regents made it clear that Stoops is their man long term.

Tuesday evening into Wednesday morning; The University of Oklahoma announced it's will seriously consider leaving the Big XII Conference unless drastic measures are taken by the conference to secure it's stability long term. 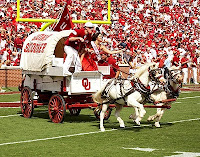 Amidst the announcement of the PAC-12 determining further expansion is not in their immediate plans, the Sooners have decided to go strong in their demands which include but are not limited to:

(1) The termination of current Big XII commissioner Dan Beebe, a commissioner who has seen not only Colorado and Nebraska leave a year ago but also is responsible for the disaster that became the exit of Texas A&M just weeks ago.

(2) Reform of The Longhorn Network, the University of Texas' television deal with sports media giant ESPN that has caused many in the Big XII to cry unfair monetary gains between programs in the conference.

You wanted someone to save the conference? While the Sooners could quite possibly have a Heisman Trophy winning quarterback in Landry Jones and frontrunners to win the 2011 National Championship, their biggest victory might be saving the Big XII conference as it looked to crumble just days ago.