While you were sleeping . .

As reported from theACC.Com on Sunday morning - The Atlantic Coast Conference Council of Presidents has unanimously voted to accept the University of Pittsburgh and Syracuse University as new members.

The first reports of a rumoured Atlantic Coast Conference expansion came sometime early Saturday morning. Making their play for 'super conference' stature, the ACC university presidents moved quickly and efficiently and got it done in what seemed like twenty-four hours. 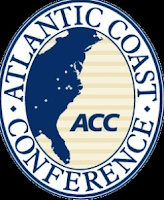 defect from $12-$14 million dollars to a bottom line number of $20 million. By making it very expensive for an Atlantic Coast Conference school to defect, the ACC protected themselves from what Texas A & M and the Big XII Conference are experiencing right now. To take it one step further, they ensured that their twelve school conference would remain intact while they surveyed the landscape of college athletics.

As it pertains to the Orange and Panthers, a very inexpensive buy-out from the Big East of $5-million dollars made them perfect targets for a conference looking to expand north. Syracuse puts the ACC in New York and Pittsburgh in Pennsylvania making the conference's northern push somewhat complete with

footprints in Maryland, Massachusetts, and now New York and Pennsylvania. Both schools represent both strong commitments to academics and athletics, especially in basketball as Pittsburgh and Syracuse are traditional powerhouses.

As the landscape of college athletics and college football specifically, evolves into unprecedented waters it seems as though the ACC will be in front for the time being. The (13) thirteenth & (14) fourteenth members to the Atlantic Coast Conference makes it the largest football conference unofficially. However, they aren't done yet. ACC Commissioner John Swofford has stated that the conference is extremely satisfied with their 14-team conference as he was with their 12-team conference, yet as the landscape changes the ACC will re-evaluate membership, leaving the door open for adding at the very least two more schools and making them a virtual 16 team 'super-conference.'

If anyone remains in the camp of leaving things as they are in college football, you should take Sunday morning's news as a sign that it just can't happen. With the SEC moving to 13-teams with the addition of Texas A & M earlier this month, and the PAC-12 consistently looking to expand and being mentioned in expansion rumours, everything is about to change. If it means the death of The Backyard Brawl, and the The Red River Rivalry, then so be it.