From Bad to Good to Amazing

It was an exciting week one. A packed weekend with rookie sensation storming the NFL in Glendale, an amazing star-studded Sunday night on the 10th anniversary of 9/11 in New York City, and capped off with a Monday night to remember from the games greatest, I'd say we have something to discuss.

The way the 2011 Dallas Cowboys season kicked-off. After going 6-10 a season ago, the new-look Cowboys really needed to jump out of the gate

well, and with minutes to go in their Sunday night season opener, it looked like they would do just that. A goal line fumble, blocked punt turned Jets touchdown, and a very untimely Romo interception later, the Cowboys were 0-1. No amount of Tony Romo support from owner Jerry Jones, second-year wideout Dez Bryant, or veteran linebacker Keith Brooking could give a Cowboy fan confidence on Monday morning. All due respect to Rob Ryan and the new look yet injury riddled Cowboy defense, it seems like same ole' Cowboys to me.

Whatever Kansas City tossed out on the field in the opener. Maybe the Buffalo Bills got better in the offseason, maybe Kansas City just wasn't ready yet, but whatever the case may be, there is no excuse for a 41-7 blowout loss in front of your home fans to open. Chiefs quarterback Matt Cassel averaging a mere 3.3 yards per completion is awful. Running

back Jamaal Charles following up his career year in 2010 with an opener that saw him rip twenty-two yards on one carry and then just 34-yards the remainder of the way is atrocious. Have I mentioned a secondary that made Bills quarterback Ryan Fitzpatrick look like the second coming of Fran Tarkenton? That all happened in Kansas City on Sunday and I'm guessing Arrowhead wasn't the nicest place to be once things started going down hill, after the national anthem.

A seven turnover performance from the Steelers. After an offseason wedding, I'm sure most people in Pittsburgh were relieved that Big Ben was no longer single. However, after fumbling the ball twice and throwing interceptions three other times, I'm sure single Ben would be welcomed back. Embarrassed on the road in Baltimore, against a division rival no less, Pittsburgh has got to be a wreck after that putrid 35-7 loss at the hands of the Ravens. Steeler fans I urge not to panic however, with Seattle, a Manning-less Colts, and Jacksonville all looming on the horizon, I'm sure you'll have plenty of time to work out the kinks.

The Aaron Rodgers v. Drew Brees show on Thursday night. Two Super Bowl winners, two likable teams, and two of the games most dynamic quarterbacks on center stage was exactly what the NFL called for and exactly what they got. Between Rodgers and Brees you got over seven-hundred yards passing and six touchdowns, how's that for fireworks on opening night? Both completed passes to at least six different receivers, neither threw an interception, and at different points in the game both quarterbacks elevated their teams to another level. Of course this game had to come down to the wire with the defending Super Bowl champion Packers coming out on top, but don't be surprised if we don't see this matchup come January. For Drew Brees and the Saints, you better hope it isn't on the frozen tundra.

How do you like Cam Newton now? I understand it was against a lackluster Cardinal secondary, I understand the Panthers didn't actually win, but when I told you back in April that he'd put people in the seats, well this is what I was talking about. In his first game as a professional, big-time Cam Newton 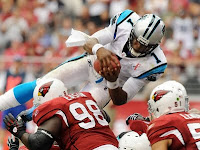 put up monster numbers. Newton threw for 422 yards on thirty-seven completions. Cam threw through windows, he put the ball in the endzone, and excited the entire east coast. If you don't think Charlotte will be jam-packed with the defending champs coming in and Cam Newton coming off that start, you're crazy. Oh, and that was with just five weeks to prepare.

In other news, Patriot quarterback Tom Brady sh*ts pure gold. If you don't think Tom Brady saw what Aaron Rodgers, Drew Brees, Cam Newton, and Jay Cutler did this weekend and used that on Monday night, you're fooling yourself. It was laughable at one point. Brady torched a banged-up Dolphins secondary to the tune of four touchdown passes and 517-yards passing yards. Brady toyed with the Dolphin defense finding eight-different targets throughout

Monday nights 38-24 passing clinic. He found open receivers when he wanted and where he wanted. He and second year tight-end Aaron Hernandez looked as though they'd been playing together for ten-years. Old favorites Wes Welker and Deion Branch caught a combined 15 passes for well over two-hundred yards including an end zone to end zone strike late in the game to put the nail in the proverbial coffin. I hope that served as notice to their division rival Jets and cornerbacks Antonio Cromartie and Darrelle Revis, who were both tormented at times against the Cowboys, Brady is not playing around this season, not with the Jets, not with the Colts, not with anyone.