Go ahead. Let New Orleans Hornets point Chris Paul hear it. You don't like 'Super Team,' you don't like self promotion, well then go ahead and let CP3 know your upset with his sudden urge to bolt the 'Bayou for greener pastures. Come on now, LeBron James has become public enemy #1 after spurning Cleveland in somewhat 'not good enough for me' fashion, 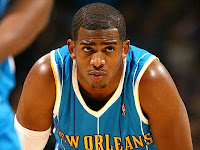 now you've got to give Chris Paul pretty similar treatment. Since his 3rd season in The League, the Hornets point guard has established himself as the single most dominant point guard in the league, 1A or 1B amongst point guards in any conversation. Yet after five seasons in New Orleans, with two years remaining on his contract, and moving further away from their deep '08 playoff run, it seems as though all signs point to Chris Paul wanting out of New Orleans in favor of a contender. Oddly enough, we've heard very little backlash toward Paul for wanting out in New Orleans. His short list of contenders to be dealt to include L.A., Orlando, and of course the Knicks. Being good friends with James, it should come as no shock to anyone that Paul wants to take aim and be involved in a championship title bout against the Miami Heat sooner than later. 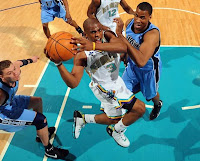 But Chris, your not a free agent. There are about four players in this league that would return equal value to the Hornets, and two of them are on the Heat. Since no one else is going to bang on Chris Paul for these rumours being out there, I will. You signed a contract which pays you close to $14 million year, the Hornets aren't going to get equal value in a trade, and the Knicks would still need Carmelo in a year before being in contention. Before you force the hand of the New Orleans Hornets, maybe you want to slow down and take a look at the landscape of the NBA. Or Maybe CP3 was telling the truth when he said 'I hope to represent the city of New Orleans and state of Louisiana for many years to come.' At the very least that sounds much better than 'I'm taking my talents to South Beach.'

Why do stories of rookies v. veterans get out at Cowboys camp?!? Because they're America's Team. First-round phenom Dez Bryant refused to take part in a rookie tradition of carrying veteran Roy Williams pads after a training camp practice. Why!?!? Because Bryant says "I'm not here to do that,

I'm here to win." Sounds good, Cowboys fans love it, do we really need these traditions in football? This is how the defenders are coming out for Dez Bryant this week. But in this particular situation, it's slightly jaded. 1) We love Bryant. He, like Cowboys receiver Roy Williams, is a Texas native. He's a 6'2", 21-year old dynamite wideout. Everything we've seen of this kid since coming to Dallas, has been phenomenal. 2) We hate Roy Williams. The Cowboys gave away two top draft selections to the Lions in 2008. Only 25 starts, Williams has less than 900 yards receiving, a ton of drops, and for

the most part has helped out no one. That's it. If this were Dez Bryant standing up to DeMarcus Ware or Marion Barber or Tony Romo, things would be different you can bet on that. We'd preach about how you respect the veterans, it's tradition, why are you not going with the flow and being part of the whole team? But because it's Roy Williams, the embattled, disliked Roy Williams, we're going to side right with Bryant. Although I've got to say, as much as I like Bryant, I want a drama free Cowboys team while they are putting together a team to make a run at the Big Dance. I've got to side with Roy Williams, the kid just needs to go along with it and put in work, it would only help raise his status with his teammates and the fans as well. Sorry Dez.

When Rays righty Matt Garza spun a no-hitter last night against the Detroit Tigers, he became the first pitcher in Tampa Bay baseball history to do so. With that, the fifth pitcher of 2010 to spin a gem of this kind, more than each of the last two seasons combined. In 2010, it's no doubt the year of the pitcher. From Matt Garza and Dallas Braden in the American League, to Roy Halladay, Edwin Jackson, and Ubaldo

Jimenez in the National League, no-hitters seem to be less and less rare. The five we've already recorded and then the near misses. Into the eighth went Red Sox hurler John Lackey last week. Who can forget the missed call blown no-no of Tigers pitcher Armando Galarraga. With five in the books, it's crazy to think that number could have increased by half with just a few more pitches made. With steroids and other performance enhancing drugs being cycled out of sluggers systems, the MLB pitching seems to be getting more dangerous by the second. With Josh Johnson and his 1.61 earned run average in South Florida, with C.C. Sabathia again biting of chunks of American League batters, and of course a slew of starters from Adam Wainwright in St. Lois to Jon Lester and his 143 strikeouts in Boston, pitching is by far and away dominating this show. I'm going over 7 no-no's this season, we've got more than two months remaining, another two isn't much to ask for. Get After It!
Posted by Lynchy at Tuesday, July 27, 2010