I'll be honest, I gave the World Cup a chance. I gave the Vuvuzelas, the whole lot of a shot. Unfortunately the reality is, I'm left wanting something more. Something a bit better. With the final taking place at approximately 2:30, it's over. These are the realities which I'm taking away.

Reality #1 For us, we needed the stars of the United States to go further. Or at the very least, Brazil, Argentina, or Portugal. For us to stay on top of this and remain tuned in, the stars we began to recognize needed to continue through the tournament. After the United States' Landon Donovan and Tim Howard were ousted from the World Cup, we immediately became less interested. Then the internationally

famous Robinho & Kaka of Brazil were upset by eventual World Cup finalists Netherlands. The 2009 FIFA World Player of the Year, Argentina's Lionel Messi was the next to fall, another player we were tuning into see won't be playing at 2:30 eastern time for the World Cup final. As well as Portugal's Cristiano Ronaldo, who to his credit could be the most famous athlete 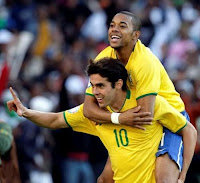 in the world in a few years, if he isn't already. Every American sport survives on the play of their stars and relies on them to be on the biggest stages. Peyton Manning, the NFL's greatest passer was in the Super Bowl this year. Derek Jeter and Alex Rodriguez led the New York Yankees to their most recent World Series title. Super Laker Kobe Bryant has been in nearly ever NBA Finals since he came into the league, one of the NBA's most recognizable superstars. When the NHL's Alexander Ovechkin and Sidney Crosby were nowhere to be found in the Stanley Cup Finals, people weren't watching. For soccer to really take off in The States, the people we recognize on commercials and in the print media needed to be playing this afternoon.

Reality #2 We're just not that into you, and we are into LeBron James. Let us call a spade, a spade. Between the NBA's draft and free agent frenzy, we not only put you on the back burner, we tuned you out. Even The World Wide Leader,

who was slamming everything World Cup down your throat, gave up once LeBron was up for grabs. The stars are bigger, the stories have more impact, grab more headlines, we know what we want. Unfortunately for international soccer, it just doesn't compare to possibly the NBA's greatest star of the last 15 years changing his jersey. How does that happen when this is supposed to be soccer's biggest stage?!?! Because we're just not that into you. Who would disagree?!? Sure, we'll pay attention when not much else is going on, we'll pay attention if it's the only thing happening, but once something remotely more exciting comes along, agree that soccer is a back burner sport. While we in the United States may have collectively vilified LeBron James and The League in general, we're all infinitely more tuned into "our" games than yours.

Reality #3 See you in four years. We're not going to begin to watch L.A. Galaxy or New England Revolution games just because of a month or two long tournament that we barely 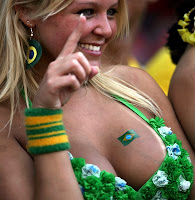 watched. Unfortunately, we don't get to see the best players in the game in the United States, they're busy playing in other professional leagues which offer more money and more notoriety than any other. Is it that crazy that it'll be a very long four years for us to pay attention yet again? That is the reality of this. We may have enjoyed parts of the World Cup, we may have even woken up earlier than usual to catch a few games, but this is where that ends, when the final game is played this afternoon, it'll be some time before we think about it again. I know who won the previous World Cup, but couldn't even tell you who won back when it was held in the U.S., really. Thanks for the ride soccer, but I'll see you in four years.